First off,
Merry Xmas!
And Happy New Year!
Here’s hoping 2013 is better for all of us!
(Now tell all your friends to start following LERNER INTERNATIONAL!)
(please!)

I don’t really like the holiday season, but must pay it some respect, if only as a form of supernatural self-defense—which is why the image up top is Chuck Heston aping the Big JC (Happy B-day, you crazy peace-lovin’ lug, you!) from the conclusion of the underrated post-apocalypse flick /commentary on important stuff The Omega Man—oh, look to the right, and there’s yours truly in happier days!

The Holidays are a haunted and forlorn season, infused with more pained ghosts and evil hobgoblins than Halloween.
This time of year gives me the shivers in more ways than one.

However, today we do look at a film that touches on drug addiction, prostitution, racism, sexism, mysticism, degeneration, transgression, narcotics trafficking, and all the sordid aspects of the “Yellow Peril” hiding in the slums and sewers of America!

In other words, the perfect Xmas movie!

[Before we continue with the review, please remember that for more images of Jolly Fat Northern European Pagan Man Recruited for Birthday of Jesus/Winter Solstice Combo-Celebration, please visit our fraternal site The United Provinces of Ivanlandia!
Thank You!]

With its moments of moody art and texture immediately followed by moments of cheap racism and dopey “ching-chang-chong” style dialog, Zugsmith’s Souls for Sale a.k.a. Confessions of an Opium Eater feels like a product of pure “id,” made by and for dope fiends—people with genuine vision, but too fucked up to discern quality “properly,” and also too fucked up to care if they offend—and well aware of their schizophrenic dichotomy, and embracing it!
I feel there is a truly personal perspective behind Souls for Sale a.k.a. Confessions of an Opium Eater: It’s inspirational because it is so bizarre, so rejecting of “your petty, lying morality” (if I may quote Kurtz from Apocalypse Now, another drug-addled hallucination that gets entangled in “The Yellow Peril”*).

If you watch this and think that there are hints of so much more than mere threadbare movie-making, you would be right! What Dennis Hopper’s The Last Movie is to the Hippies, Confessions of an Opium Eater is for Beatniks.**

Because it does not feel like we are watching a cheap fly-by-night production,
but rather a no-budget gang of inspired film pirates stealing sets and footage, and doing the best they can despite their withdrawal symptoms—all because they need to make this movie as much as they need to score a fix.
The “dreamlike” aspects of the film are the fever dreams of the filmmakers transferring their narco-psychosis onto the celluloid via osmosis.
And film is, of course, always ready to absorb all of our nightmares…

The “Dream State” is further reinforced because Confessions, while set in 1902 San Francisco’s Chinatown, is art-directed with a mish-mosh of costumes, props and sets from all quarters of the pre-1962 “Past”: tommy-guns and swords from Arabia share screen time, and Old West sets mix it up with Ancient Peking designs, creating a faux-David Lynch vibe where anachronisms abound. (I’d like to think the film actually “stole” sets by sneaking into other pictures’ sets after closing time; because how else to explain the extremely schizophrenic art direction?)

From the get-go, things are weird: the version I watched was actually titled “Souls for Sale a.k.a. Confessions of an Opium Eater”—look at the screengrab below! That is the name of the motion picture that I watched.
And I think that that is great: total dope fiend over-explaining “logic” right there from the start; brilliant! 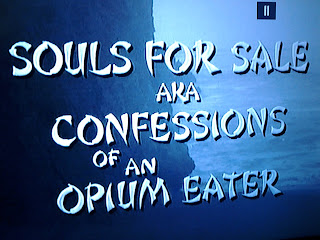 [Never released to any sort of home-viewing format, the film has been finally given a DVD release recently, but I am not sure what the title cards say on that “official” version, as my copy was a bootleg gifted from a good pal.]

Meanwhile, Souls for Sale a.k.a. Confessions of an Opium Eater is very padded out (like its title in for this version), although sometimes brilliantly so (like the post-opium-smoke-out slow-motion fight and chase; or the variety of bizarro montages),
but at other moments it is obvious director-producer Zugsmith is killing time to stretch out the pic’s length to score more gigs in the lucrative “hardtop” market.

Confessions is an adventure story for “Beautiful Losers,” those individualistic but severely codified genius dope-fiends or alcoholics full of esoteric knowledge who’ve swallowed whole the Beat Generation ethos, and have done nothing with themselves except become witty and sardonic raconteurs and low-level part-time grifters and occasional billiard hustlers.

Instead of laudanum-soaked Thomas De Quincey’s alleged source novel, Confessions of an English Opium-Eater (1821)—which is now a bit of an unreadable bore; stick with Samuel Coleridge’s opium-influenced poetry instead for goodies from that era—
if anything Souls for Sale a.k.a. Confessions of an Opium Eater feels like a “cleaned up” Hollywood-version of a William S. Burroughs story, where a jaded traveler embarks on a dangerous journey that is a combination of a satire of the Fu Manchu-style adventures stories WSB grew up with; his desires for teen boy flesh; and the usual obsessions about Drugs & Control.

But since the film is “cleaned up,” Vincent Price’s tough-guy/fey combo must stand in for any genuine “queerness,” however with an overload of Asiatic madness and optical-printer-tweaked stock footage, as well as some androgynous pants-wearing Asian babes to make up for it.
Meanwhile, Price isn’t presented as a complete junkie, but he sure feels like one.
Why else would such an obviously cultured gent like Vinnie the P. (Yale, 1933) be slumming so low? This is reinforced if you know that Burroughs was Harvard ’36...

As Anti-Naturalistic as possible, this is a mess of a film—but with such incredible moments of sheer pure unadulterated id that you can superimpose whatever you want on the proceedings.
Perhaps the film is an attempt to recapture youthful opium dreams, while acknowledging their danger?

Before Confessions, Zugsmith produced many films including High School Confidential (1958; Jack Arnold), the magnificent existential parable of Post-WWII American life The Incredible Shrinking Man (1957; Arnold again, screenplay by Richard Matheson, from his novel), several of Douglas Sirk’s films, Welles’ infamous Touch of Evil (1958), and plenty more—
All seemingly-tawdry films that rose far above any perceived sordidness because of their inherent quality and artistic drive, all tinged with a whiff of madness.

Is Souls for Sale a.k.a. Confessions of an Opium Eater the culmination and crystallization of all the things Zugsmith picked up while working alongside such certified pros as Jack Arnold, Doug Sirk, Richard Matheson and former drinking-buddy Orson Welles?
If so, Zugsmith was then a fantastic student.
Is this film Zugsmith’s magnum opus? I think so. The film’s messiness personalizes it so much, even while being essentially incomprehensible, except on a “gut” or subconscious level.

Not that you should follow the examples of any of the characters in Confessions, but the film itself is akin to a mystical and quasi-personal teaching experience, a parable or lesson, like Jodoworsky’s The Holy Mountain (a film perfect for a double-feature with Confessions): Come to this motion picture with an open mind, and you may take away something, even if only a profoundly disturbing sense of weirdness, and that the world may have more levels than you can come close to unveiling, let alone understanding.

Confessions could also be on a double feature with The Brain That Wouldn’t Die (1959, released in 1962; Joseph Green), another transcendent production, overcoming its sleaze by embracing it completely, reveling in its own unrepressed id; as the brainiac surgeon lets his libido take over as he searches—and kills!—for the perfect body to host his girlfriend’s severed head (in a dish, hooked up to gizmos, natch).

So yes, if you like flicks like Skidoo, Pink Flamingos, Touch of Evil, The Brain That Wouldn’t Die, The Holy Mountain, The Last Movie, The Incredible Shrinking Man, or, say, Eraserhead—unique classics all***—then you should certainly give Souls for Sale a.k.a. Confessions of an Opium Eater a view.

* = While I love Coppola’s Vietnam epic and consider it a fantastic war film, I also feel that the film says nothing about the actual conflict, except in stretching Jungian psychology to its breaking point regarding the “psychic damage” the war was causing, or the vast embracing of the “Shadow” by bureaucratic war mongers and their psychotic stooges—but even that’s bogus.
What war movie that wasn’t jingoistic propaganda has not touched on shell shock or PTSD? Even Spielberg’s execrable Saving Private Ryan has Captain Tom’s shaky hands.
In Apocalypse Now, regarding the timeframe/historical context, the Asians are all background fifth business, there is no discussion of the genuine politics of the situation, and it all seems to be Baby-Boomer nostalgia for cheap reefer and good LSD. (Not that The Deer Hunter was really about Vietnam, either, but that’s another essay…)

** = Because I haven’t seen it yet (but sure want to, despite its looking atrocious), I’m not sure if that would make Zugsmith’s subsequent Movie Star, American Style, or LSD: I Hate You (1966) [URL] the equivalent of Dennis Hopper’s Gotterdammerung of the Hippies, that highly-recommended feel-bad masterpiece Out of the Blue (1980)…but it sounds clever, right?

*** = So many of these films are beautifully shot in B&W like Confessions (expertly lensed by Joseph Biroc, cinematographer on the great Kiss Me Deadly), and for me, crisp and shadowy B&W always enhances a film’s “fantastical,” or “dreamy” nature.

An incredibly comprehensive look at The Zugsmith’s career is HERE at Bright Lights Film Journal, along with a mindboggingly thorough examination of Souls for Sale a.k.a. Confessions of an Opium Eater, which can be found HERE.

Meanwhile, the fab Roderick Heath provides his thesis on Zugsmith’s meisterwerk HERE; and over at Trailers From Hell, HERE is Joe Dante’s rave.

Happy Holidays to all of LERNER INTERNATIONAL’s readers!
THANK YOU!!! 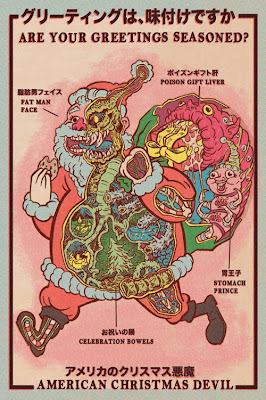 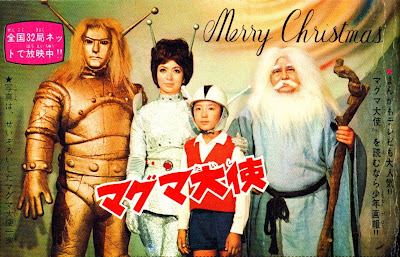 Email ThisBlogThis!Share to TwitterShare to FacebookShare to Pinterest
Labels: Albert Zugsmith, Confessions of an Opium Eater, Skidoo, Souls for Sale, The Brain That Wouldnt Die, The Holy Mountain, The Incredible Shrinking Man, The Last Movie, Touch of Evil, Xmas