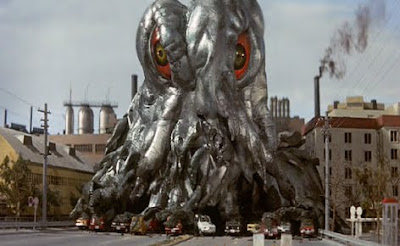 Yes’m, this is LERNER INTERNATIONAL’s First Quiz, and welcome to it!
Look, Hurricane Sandy has trapped you indoors if you live on the Eastern Seaboard of the US, so what else are you going to do? Take a movie opinion quiz!

Why “Silver Medal” and “Favorite That’s Not” Quiz?
One thing that bugs me most about some movie quizzes (aside from my frustration at the questions) is the lack of bandwidth, with the same answers appearing from all contestants.
Of course, there are classics out there that all filmgoers love across the board, and so you’ll get a million people all answering “Godzilla” or “Willis O’Brien’s King Kong,” when the question is “What Is Your Favorite Giant Monster?”

Let’s try and shake that up! (And doesn’t Hedora, the Smog Monster [above, at top] look like he’s made of silver?) (And NO, monsters are not the only topic discussed in this post...)
Questions below!

[Since Godzilla is everybody’s ichiban giant Japanese man-in-a-monster-suit monster, LERNER INTERNATIONAL is letting this post be illustrated with all those kaiju second-stringers—you know, the “silver medalists.” Besides, I love these critters and their foolish—almost existential—attempts at trying to bring down the Big G.…(Also, by using these random monster pix, I won’t be giving away too many clues—(except for a longtime love of Japanese monster movies)—to what my future answers may be.)]

The idea of silver medalists came to mind while finishing the latest Sergio Leone and the Infield Fly Rule Quiz (with blog-creator/quizmaster Dennis Cozzalio’s many questions asking for the reader’s #2 faves), and really began crystallizing during the completion of the most recent quiz from The Girl With the White Parasol, whose questions were open-ended enough for multiple and varied answers.
Two tests in one month really started the gears clicking in this old noggin, yessiree!

Not that LERNER INTERNATIONAL’s quiz is a criticism of those fine questionnaires and others I may have taken in the past,
but I am interested in people’s more unique, very personal choices—these can lead to inspiration!
How else am I going to find out about films I haven’t heard of before? As open-minded as I think I am, my horizons can always be broadened so much more. Maximize Cinematic Sensory Input!
Please continue; questions below—

Feel free to answer in the comments, but really I’d love it if you made a post at your own blog, and then posted that URL of that posting in the comments below—it’s more fun that way!

And to my pals who’ve been extremely lax in their postings—for like the last two years! I’m not naming names (well, I am, sort of)—now’s the chance to jump back into the Blogosphere with both feet doing something easy, even if it’s just for one post.

LERNER INTERNATIONAL will be answering its own questions within a week or so…STAY TUNED!

[Multiple answers are allowed, and be as detailed as you want/need to be! LERNER INTERNATIONAL needs to hear your opinions!]

1.) Favorite Warren Oates perf that’s not in a Peckinpah or Monte Hellman movie?

3.) Favorite John Ford film that’s not a Western or set in Ireland?

5.) Favorite Clint Eastwood-directed film that’s not Unforgiven or Play Misty for Me?

9.) Fave “Savage Cinema” that’s not the original Straw Dogs or The Last House on the Left?

11.) Fave Left-Wing director that is not Michael Moore, Costa-Gavras or Oliver Stone (not that I consider Stone genuinely left-wing; I think he’s more of a sleeper-agent selling discount rebellion to moviegoers)?

13.) Favorite alien not designed (or based on a design) by HR Giger, or that is the extraterrestrial from John Carpenter’s The Thing?

14.) Favorite Biker Movie that is not Easy Rider, The Wild One or The Wild Angels?

15.) Favorite robot not from Forbidden Planet or the Star Wars movies?

16.) Fave “one-shot wonder” (solo directing credit) that’s not The Night of the Hunter? 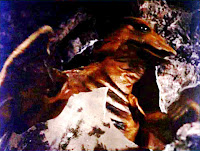 17.) Fave car chase not in a Philip D'Antoni film (and not everybody chose 1971’s Vanishing Point, please!)

18.) Fave religious film not based on a characters or a story in The Bible?

21.) Favorite Giant Monster that’s not Godzilla or the 1933 King Kong?

BONUS QUESTIONS
BONUS NUMBER ONE
English-language movie that blows your mind, that no one knows about, that’s hard to see, that you want to get on a rooftop and shout about:

BONUS NUMBER TWO
Foreign-language movie that blows your mind, that no one knows about, that’s hard to see, that you want to get on a rooftop and shout about:

Thank you for participating!
And if you live in the Hurricane Sandy Danger Zones, LERNER INTERNATIONAL hopes you and yours are safe: batten down the hatches and hunker down with some horror movies—remember it’s still the Halloween season! Enjoy it! 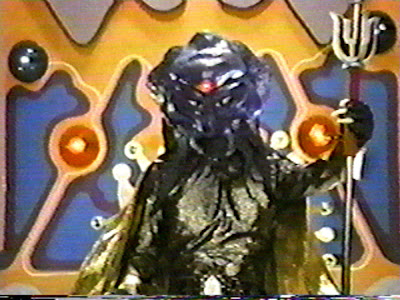 Email ThisBlogThis!Share to TwitterShare to FacebookShare to Pinterest
Labels: a special thanks to all the sites I borrow images from, B-movies, everybody join in, Favorite That’s Not Quiz, kaiju, My First Quiz, quiz time, The Girl With the White Parasol