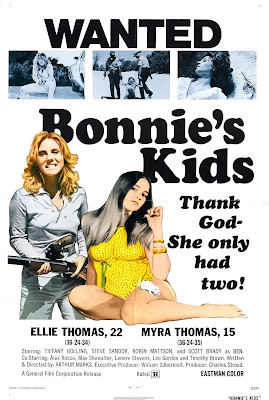 Bonnie’s Kids like the kind of kicks that could kill you!
Hang out with “Bonnie’s Kids”—you’ll have a blast!
Bonnie’s Kids—they’ll blow you…away.

Lurid sleaze abounds when Bonnie’s Kids strut their stuff! Sisters Ellie and Myra are nothing but trouble—in and out of bed! But ripping off gangsters is never smart, no matter how sexy you are. Will these bad girls make it? To find out, see Bonnie’s Kids!

Forgotten and largely unseen since its initial release 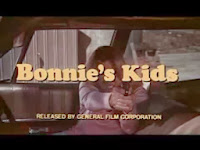 in 1973, Bonnie’s Kids is a lost neo-noir sleaze classic that deserves rediscovering. It’s so much more than drive-in/grindhouse filler: It’s a great twist on the “femme fatale on the run” theme, one that really toys with the audience, like an especially malicious cat with a hapless mouse. 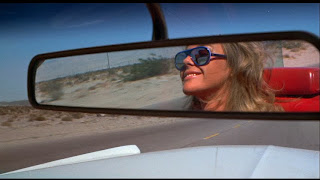 Rather than a film, Bonnie’s Kids honestly feels more like a sleazy paperback book you’d pick up in a junkshop while on vacation—and you only picked it up in the first place because of its lurid cover—but you cannot stop reading it once you’ve started. When you’re done, you want to tell all your friends about it. (Which is sort of how I saw it: Mack Daddy SqDave gave me a copy of Bonnie’s Kids, and once I finally watched it, wow! I was hooked! I’m even trying to get it screened at Brooklyn’s Spectacle Theater.)

Written and directed by Arthur Marks, what starts off as a dopey white-trash teen-sex-romp rapidly mutates into something else far more sinister, finally metastasizing into the savage B-movie love child of Elmore Leonard and Charles Willeford. Marks had an interesting, if uneventful career, but Bonnie’s Kids is his masterpiece. 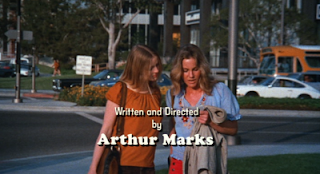 With both barrels of a shotgun, Ellie (Tiffany Bolling) and her jailbait sister, 15-year-old Myra (the oh-so-naughty Robin Mattson), have escaped the clutches of their molesting stepdad, and split to the big city of San Jose (!?!) to enjoy the good life with their Uncle Ben (veteran character actor Scott Brady; this flick is overflowing with recognizable faces), a gent whose publishing empire is a cross between Playboy and Hustler.

While Ben’s lesbian wife takes a shining to young Myra, Ellie oozes her charms at the publisher until he uses her to “run an errand,” which means picking up a half a million dollars of stolen loot! 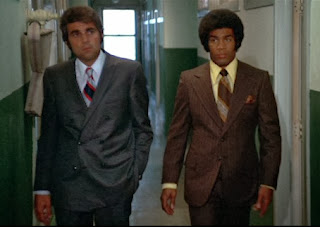 After hooking up with a lunkheaded but handsome private eye (Steve Sandor, later the evil biker from The Ninth Configuration), Ellie double-crosses Ben—and of course he sends henchmen after her. And this is where things really pick up: the goons are a salt & pepper team, Digger (Timothy Brown) and Eddie (Alex Rocco, veteran of a zillion hard-boiled flicks, but best remembered for getting shot in the eye in The Godfather). Eddie is the leader, and he’s like a cousin of Richard Stark’s paperback novel anti-hero “Parker,” a no-bullshit professional, but both he and Digger are also intelligent, hard-working and tenacious—as well as ruthlessly vicious. 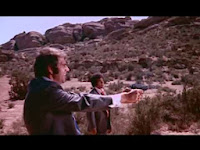 Although usually set in the bright, almost blinding sunshine, Bonnie’s Kids continues the film noir tradition of creating a world that is dark, brutal and hopeless—an existential nightmare. For the most part, everyone is mean or on the make, and the nicest character is considered by others to be a “pervert” and a “creep.”

Like a good pulp thriller, Bonnie’s Kids is willing to throw you curveballs. As the film advances, it gets more and more mean-spirited: innocent bystanders are slaughtered, good Samaritans have their heads kicked in, and blood and mayhem are left in the awesomely tawdry Ellie’s wake. Meanwhile, she and her Private Dick get worse and worse: they are not nice people. 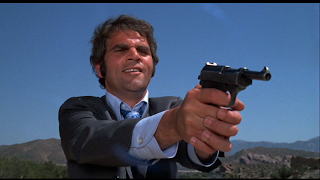 Through the help of crisp cinematography, great use of unique locations in the Southwest (all of which are now probably gone due to expanding urban development), and a grim, fatalistic and genuinely ironic ending, Bonnie’s Kids is a wonderfully nasty neo-noir. Subtlety isn’t its strong suit, but soon what had been a TV-movie-style of artlessness, becomes a cold, dispassionate vision—akin to villain Alex Rocco’s point of view, almost as if he was infusing the film with his personality. 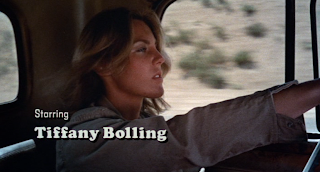 This is a B-movie that keeps getting better and better as it moves along—tracking its protagonists on their one-way express trip straight to hell. But it’s the superbly crafted rise and fall of Ellie, the doomed trailer trash valkyrie who risked it all for the sweet life, that really makes the flick.

Played with loads of killer attitude by the superfine Tiffany Bolling (also the star of The Candy Snatchers, as well as Kingdom of the Spiders), femme fatale Ellie is the missing link between Gene Tierney in Leave Her to Heaven, the psycho go-go girls of Faster Pussycat Kill! Kill! and ice-cold evil super-genius Wendy Kroy of The Last Seduction. A white trash demoness using razor-sharp guile and a body built for sin to get what she wants, Ellie’s only semi-civilized, though, and still a danger to herself—not to mention everybody else around her…

And as for sweet, sexy Myra? Heh-heh-heh, just watch the movie and you’ll find out… (But it’s really a perfect ending—honestly!)

Bonnie’s Kids has been available on both VHS and DVD, but now is in the public domain and can be seen HERE.
(And sorry I’ve been away so long; I’ll explain as soon as I can…) 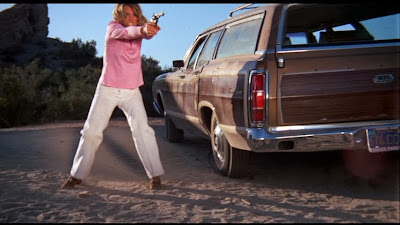