[Sci-Fi June checks in with something that’s still in the theaters. Spoilers abound, about a starcruiser’s worth…] 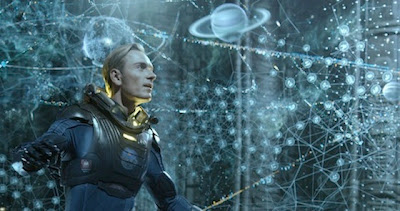 Prometheus (2012; Ridley Scott) is a flick that needs serious mental gymnastics to make sense of and appreciate—if you’re so inclined…

A prequel to Alien, with mashed-up elements of Chariots of the Gods and 1955’s East of Eden thrown in, Prometheus follows explorers with conflicting agendas who are using star-charts from 35,000-year-old cave wall paintings to discover that our ancient astronaut creators are not at all friendly.

Hardly without its flaws—Prometheus is a damn fine flick to look at, technically perfect, partially shot in ’s volcanic fields, with incredible sets and special effects.
Even when the script makes no sense whatsoever (which is most of the time—and completely unravels at the end), director Scott knows how to create mood, suspension and excitement—with plenty of gore.
It’s got all the elements of a “spectacular” crowd-pleaser, even supposedly “deep” theological questions that fanboys and pseudo-intellectuals can chew over later.

Wow, what original Alien screenwriter Dan O’Bannon started as a homage to Planet of the Vampires, It! The Terror From Beyond Space and The Voyage of the Space Beagle has certainly turned into something else entirely!

Prometheus was made because Ridley Scott hasn’t had a hit since 2001’s Black Hawk Down (which I thought was a turgid dopey mess of a movie, anyway, not as exciting, intriguing or as violent as Mark Bowden’s highly recommended non-fiction book), and in H’wood, you need success to keep the sharks at bay.

So Scott has returned to the one film from his career, Alien (his second movie, and first hit), that has maintained a high level of public awareness through its sequels and spin-offs.
Throughout all those other movies, it was never touched on where the xenomorphs (the infamous H.R. Giger-designed monsters) come from, and why their eggs were in the bottom of that strange derelict spacecraft in the first Alien—
nor who the Space Jockey (that fossilized “astronaut” with the elephant head, at the “controls” of some strange instrumentation in the derelict ship) was, or anything else about him.

There’s been much speculation over the years on whom the Space Jockeys were, especially in the Alien comic book spin-offs, but no canonical answers.
With Prometheus, director Scott and producers Walter Hill and David Giler have tried to answer those questions and many more.

However, this flick will drive genuine science fiction fans (not fantasy geeks; and there is a difference) and Members of the Reality-Based Community bonkers.

Honestly, I was sitting in the theater, and I could feel my teeth start to grind—I thought about the $14 ticket, and knew I had to find something to like.

To enjoy this flick, do what I did: treat lead character Dr. Shaw as the villain (very early in the film, I was certain she was mentally unbalanced when she spoke the lines “I think they want us to come and find them”)—

Meanwhile, treat the seemingly treacherous android David as, if not the hero or anti-hero (tragic hero?), then the film’s protagonist—the character that completes the greatest dramatic arc.
Fuck that “find the creator” bullshit—to quote cool space-captain Stringer Bell, “Who cares?”
Give me the story of a bastard son who wants to kill his father.

In the late-21st century, Dr. Elizabeth Shaw and Holloway, her petulant jock-slacker-asshole boyfriend (she must’ve written his papers in college), are ostensibly in charge of an expedition to planet LV-233, the final destination of a star map they discovered throughout archeological digs all over the globe in completely unrelated cultures.

Shaw fervently believes the map is an invitation, a request from God to come and visit. But she isn’t as smart as she thinks she is—and her religiosity (she always wears the cross of her dead missionary dad around her neck) has given her certainty: she knows she’s right. The fact that she could be wrong, or simply uncertain, never crosses her mind—which is pride: hubris, a sin.
And to think that she knows what “God” is thinking (oh, he wants us to drop in and say hi) is even more prideful.
The only reaction an audience should give her is contempt: she’s doomed everybody!

Because planet LV-233 isn’t God’s Heavenly Throne or some such nonsense—it’s a bioweapons ammunition depot for the Engineers—what Shaw calls the Space Jockey race, who it seems created life on Earth from their own DNA (man jumping into ocean of a dead planet to create new life was already used in Alfred Bester’s short story “Adam and No Eve,” but whatevs…).

It seems that about 2,000 years ago there was an accident at the base, and all except one of the alien astronauts was killed, many of them with holes punched out of their chests…
When the “spill” wiped out the Space Jockeys, it seems like they were preparing to launch—to start a bomb run on planet Earth.
And now the naïve humans have “woken up” the base…
(I love how the awakened “Engineer” freaks out on seeing the humans—I imagine the reaction of the pilot of the Enola Gay waking up to find the cockpit full of Japanese.)

Better than Tyrell’s replicants, David is by far the best thing in the film; and Michael Fassbender plays the part to perfection.
Created by zillionaire Weyland, who says the synthetic person has no soul—a statement David’s subtle pang of hurt instantly disproves—the android (with corporate trademark on his fingertips) is working for The Man, certainly, but doing it cool, his way.
Also a little perversely: we see him “scanning” Shaw’s dreams when she’s in hypersleep—isn’t that intrusive? But he’s enjoying it; the robot is a voyeur! (And intrusion is one of this series’ major themes, after all…)

This mechanical man has an agenda, and he’ll use Shaw’s to his advantage.

Weyland has called David the son he couldn’t have (itself an even subtler clue to something else going on in the movie—child abandonment/rejection themes abound, boy howdy!), but is David going to run the company, or continue being an obedient Company Man when the rich geezer croaks it?
And then that “soul” thing—you don’t say that about your kid in front of employees, dude.

So David’s a bastard son, essentially—like T.E. Lawrence, who, because he was born out of wedlock could never inherit his father’s title or lands, and had to go into the army out of necessity. We’re shown that David loves the film Lawrence of Arabia, even cutting his hair to be like Peter O’Toole’s. But it isn’t a cutesy affectation; it’s a clue to David’s personality.

Emulating his idol (remember, ended up helping the Arabs because he respected them, not because the bosses said so), David eventually “goes native”—and planet LV-233 certainly is desert-like.
Being secretive, callous and almost cruel, David uses the crew, specifically Shaw and Holloway, for experiments (hinted to be at the behest of Weyland, who’s hiding on-board, but also out of his own curiosity and revenge).
But then he goes beyond the call of duty when learning and exploring the alien craft—all the better to help Pop meet his maker, I suppose? David feels that when his father is dead, he will be free.
What happens to David is a lesson for us all: our parents aren’t anything to lose our heads over.

Getting back to our zealous villainess, Shaw says that whatever happened to the aliens, happened about 2,000 years ago—which would be in this film’s timeline, about 100 years after the birth of Christ—and the beginning of the rise of Christianity!
Were the Space Jockeys getting ready to nuke Earth from orbit with a bunch of parasitic bioweapons—because of Christ?!? Whoa…
Now, I believe the movie thinks this, too—because when the villainess goes on her crusade to find the Space Jockey home planet, she notes the date as “Year of Our Lord Twenty-Ninety-Three.” [my emphasis]
The Space Jockeys destroyed of her dream of a “Just & Kind God,” so her genocide against them will be a total Jihad!
Which is why I didn’t mind the very ending of the picture: it’s very New Wave Science Fiction to have humans going on a holy war against “God.”

But it also means that her faith has been completely shattered—that the decent and wise parts of the Bible (a book written by humans, Shaw seems to forget), like the noble lessons of Christ, now mean nothing to her. So in a sense, she never was a true Christian, she was practicing a type of neo-scientific idolatry.

Of course, having a squishy alien-spawn inside her barren uterus is a spooge right in the face of her religion, mixing virgin birth, rape and monstrousness (how many times did she pray to “God” to get pregnant before leaving Earth? Now she is, and she’s disgusted)—further unbalancing her mentally (not that a Caesarian section while awake does any good for the synapses, either).

Midway in the film, Shaw and David converse philosophically, and he asks, “Doesn’t everyone want their parents dead?”
“I didn’t,” the obnoxious Shaw quickly snaps back—and there’s the problem: she’s still daddy’s good little perfect girl regarding other cultures as playthings and trinkets for her amusement.

Which may explain why she and her staff routinely break with basic scientific protocol, if not common sense—from playing “kitty” with mutant snake-vaginas, to taking off your helmet in a potentially germ-filled environment, to getting lost when you’re the mapmaker, to letting a patient with an alien embryo gestating inside her to escape and not give chase, to leaving the bridge empty when there are men stranded outside, to…
—maybe in the future, they don’t let the smart ones off-planet.
The Corporate Overlords of the Future know space is too dangerous—can’t risk the brain-trust on one-way missions! If the dummies make it back, send ’em out again, like Ripley.
If they don’t make it back, good riddance (Ripley was a troublemaker, anyway).

As for extraterrestrial contact, these knuckleheads were probably thinking it’d be a happy Spielberg E.T. to welcome them instead of Cthulhu’s big brother.
I’m with Mad Doc Stephen Hawking, who says that contact with aliens
“would be a disaster. The extraterrestrials would probably be far in advance of us. The history of advanced races meeting more primitive people on this planet is not very happy, and they were the same species. I think we should keep our heads low.”

A prequel to Alien that could only feel “stand-alone” if you decided to ignore the constant references and shout-outs to Alien, Prometheus would still be fun for a “newbie” (everybody knows that you don’t try and pet a mutant vagina-cobra!)—and it would be interesting to gage their reaction—or not—to obvious parallels to the 1979 movie.

The first Alien was seen by me sometime in early July 1979 on my birthday weekend, at the long-gone Avalon Theater on —and it scared the shit out of me!
One thing I’d figured out even back then was that the xenomorph was a bioweapon.
Even before James Cameron introduced the concept of a Queen, when the creature itself was mutating human victims into eggs (from scenes cut out of the original release, but still in Alan Dean Foster’s novelization, as well as much of the promo/supplemental material, like Walt Simonson’s excellent comic book adaptation, and The Book of Alien production design catalog), the creature’s whole reproductive cycle is not a natural one, it demands “hosts” (victims) more than simple parasites do—and with Prometheus, it was mighty pleasant of Scott & Co. to finally acknowledge that I’ve been right all along. 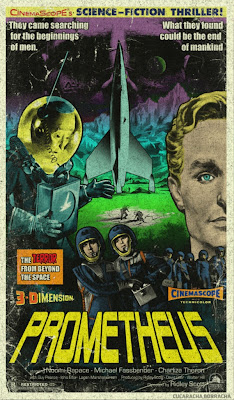