[Sci-Fi June continues with a retroactive Cinema of Weirdness entry] 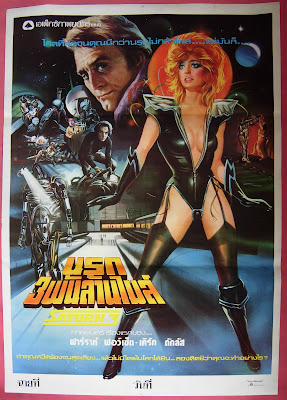 But time has been very kind to Saturn 3, thankfully, and it deserves another look with fresh eyes, because the film is really more like a tawdry, hothouse remake of Forbidden Planet, if reimagined for Heavy Metal magazine.
And in a genre now over-stuffed with bullshit Joseph Campbell-esque “hero’s quests,” that is a breath of fresh air.

Now that it can be considered for its own merits (as opposed to what the publicity machine had been ramming down our throats back in 1980), Saturn 3 is a final product I found to be very entertaining!
In style and tone, the film winds up being like some “lost” TV movie from the ; sort of what would happen if Gerry Anderson ever tried adding sex to his usual mix of excellent 1970s special effects with lapses in logic to aid mood and tension.

Set in a future where space flight is common, with massive cruisers gliding smoothly between planets, we follow homicidal Harvey Keitel as he blasts an astronaut out of an airlock (in a spectacularly gory fashion), and takes the dead man’s place on a mission to the hydroponic research station on Saturn’s third moon.

There, Adam and Alex (Kirk Douglas and Farrah Fawcett, doing the May-December) seem to sit around and never work, so Keitel unpacks Hector, a giant and menacing, if rather unwieldy robot, to aid in production.

Keitel’s already made several passes at Fawcett, so when he literally plugs his cortex into Hector to speed up its training, the metal monster gets the hots for her, too. Love triangles become love squares—with two of those angles being very sexually frustrated, if not psychopathic.
Meanwhile, the moon is going into eclipse behind Saturn, and the station will be out of radio contact with the space fleet for 22 days, leaving the four very, very isolated…

When Saturn 3 was finally released, nearly all scenes of sex and violence—its major selling points, besides being an obvious “space opera”—had been excised by snooty execs whose delicate sensibilities were offended.
(It’s a butchered film, and what the final product really feels like is the edited-for-TV-version that would have been broadcast on some local station in Squaresville.)

Not only that—
During shooting, Saturn 3’s budget had been slashed in an internal studio wrangle: ITC needed the bread for Raise the Titanic! (which was awful—I saw that in the theater, too, immediately grateful that I snuck in that afternoon—and if by doing that, I helped that flick flop, then good).

Saturn 3 was to be the directorial debut of the late John Barry, who had been the production designer of successful films like 1977’s Star Wars, Superman (1978) and A Clockwork Orange.
But a few weeks into the production, Barry’s lack of experience—and inability to stand up to an increasingly bullying cast—caused him to be replaced by Stanley Donen, who was already producer.

After shooting and editing was completed on Saturn 3, Brooklyn-born costar Keitel’s voice was dubbed over by an Englishman….

That said, Saturn 3 moves at a brisk pace, and while it bungles opportunities for more stylish or unique camerawork, I’ll give director Donen (veteran director of lighter fare like Charade or Singin’ in the Rain) some credit for doing a good job as a last-minute replacement with a genre he was unfamiliar with.

Martin Amis’ script is a tad hackneyed, like he’d gotten high and watched a bunch of Space: 1999 episodes, but with such a troubled production, who can tell? With this flick’s odd pedigree, you would think it would be much, much weirder—but considering what’s been chopped out…

Also: He may not admit to it, but Amis’ plot owes much to 1956's Forbidden Planet, just mixed around with more perversion: You have the old man and foxy young gal on an isolated planet; the unwelcome and intruding space travelers; the incredible robot that can do just about anything—and even the monster from the id is still present: not as a giant electric bulldog-pig, though, but just simple lust and jealousy.

Written when Amis was still l’enfant terrible and not yet an institution, Saturn 3 does manage to sneak in dark indications of what a horrible, soulless place the future has become: There are sinister suggestions that Earth is now a totalitarian government that encourages sexual decadence as a form of creepy social control, and that overall life in general is more hive-like.

The writer plays a further twist by having Keitel’s vile actions and solicitations towards Fawcett being considered normal “back home.” It’s her rebuffs to his sleazy come-ons that are socially unacceptable.
Meanwhile, back in 1980, the audience was forced to watch egotistical ham Kirk Douglas pretend to be young and virile, but now we can see—and it adds glorious subtext to the film—that Douglas has also been tricked (or happily accidented) into playing a man suffering from “Peter Pan Syndrome”—
The character of Adam doesn’t want to grow up—
but the only place he can do that in the surveillance-super-state of tomorrow would be to “go off-world.” Keitel taunts with the older man’s obsolescence, and you can image that the suicide booths of this future aren’t as nice as the ones in Soylent Green.

Keitel is a dangerous homicidal nut, but Douglas is the real snake in the grass of this deep space : he’s picked a hot chick who’s never been to Earth as his companion,
because on Earth, she’d have nothing to do with him!
(It’s also a tad unsettling that Farrah’s character seems to have no back-story: We are never given details how she got to the Saturn 3 station—did Adam find her? Does he know her parents? Was she a shipwreck survivor? Was she bought? Put together from a kit? Grown in a vat?)

Adam, ’ hydroponic scientist, is the completely opposite of Bruce Dern’s Freeman Lowell from 1972’s ecological space opera Silent Running (another sci-fi movie set near Saturn)—
Dern sacrifices human contact and stays in deep space for a higher cause: the preservation of the forests.
is in deep space supposedly for the noble cause of developing new food sources for Earth’s teeming billions, but in reality he’s there so he can pretend to be young again and play hide-the-sausage with young space-poon.
Knowing that, the character’s final actions are not so much a tragic sacrifice, but a selfish opportunity for “noble” suicide.

If anything, Keitel’s Captain James is Adam’s “dark mirror,” an evil doppelganger: what Adam would have become if he hadn’t gone hiding in space, and not left the “civilization” of Earth.

Now that Adam’s dead, Farrah can go to Earth, and live—if she’s not too feral and unsocialized from his keeping her in isolation for so long….


As far as I know, Amis has never written another film script. Perhaps he was soured by the experience with Donen, Douglas & Co., which he later used as the basis for his 1984 novel Money. 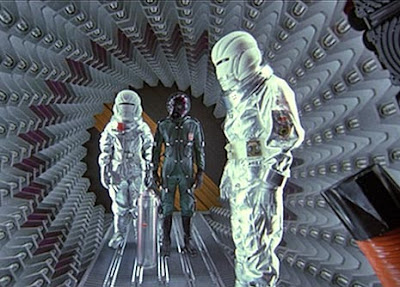 If the production design had been more Barbarella and less Battlestar: Galactica, Saturn 3 might have been better remembered, instead of being shunted aside for other B-movies with “better” “dirty space tech” hardware design and effects. The interior of the Saturn 3’s space station is dull, comparatively.
The robot isn’t a design I like, either, but it’s adequate as a monster, and with its resemblance to an anatomy chart, there’s an icky biomechanical feeling to it—especially since its “brain” is a tube full of squishy brains! 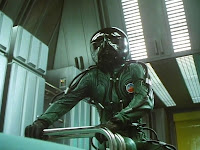 In 1980, when compared to the achievements of Star Wars, Close Encounters, Superman, and even Moonraker, the special visual effects of Saturn 3 were mocked and ridiculed.
But now I find them almost charming, especially the more inexpensive, cunning trick shots like the mirrored water with rocks representing Saturn’s rings. The effects were the creation of old school visual effects genius, Wally Veevers (and others of course), who had worked for Kubrick, James Bond and Kenneth Anger!

The spaceships have almost improbable and clunky designs—welcome after years of “cool” starships; and the spacesuits were different, as well, with Keitel’s green-latex bug-mask combo hardly looking NASA-approved.

The movie has been unavailable on home viewing format for many years, probably due to the eventual financial collapse of its studio, ITC—
I saw Saturn 3 on-line HERE—it used to be on Netflix Streaming, but hasn’t been there since roughly 2009, unfortunately.

Saturn 3 is a perfect example of the inadvertent entry into the Cinema of Weirdness, like so many of them are—but only when you look at it the right way…. 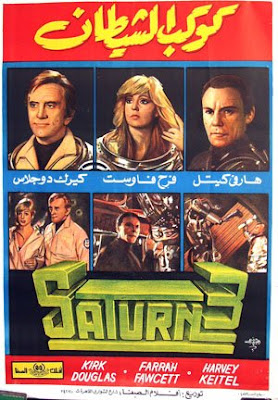