Harry Harrison’s “Bill the Galactic Hero” and the Return of Alex Cox: Huzzah! 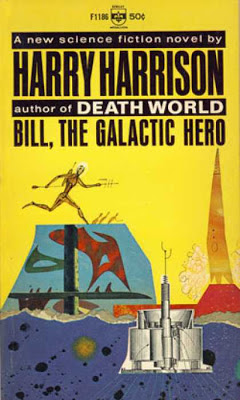 Despite—or because of—directing Repo Man, one of the greatest films ever made, Alex Cox is one of those filmmakers who just don’t seem to make enough movies.

So it was with joy that I heard that, via Kickstarter funding, Cox would be adapting one of my favorite books, the hilarious science fiction satire, Bill, the Galactic Hero by Harry Harrison.

[A Note About the Illustrations: These are, for the most part, a variety of “Space Marine”-style photos from different movies and TV shows that could give clues as to the type of designs Cox may or may not use in his interpretation of Bill, the Galactic Hero. Besides, they look neat!]

Originally published in 1965 (but only after being rejected by Harrison’s regular publishers), Bill, the Galactic Hero takes the standard “Space Marine” storyline, and puts a big spin on it. By spoofing the then-dominant pro-militaristic and technocratic literary canon, Bill, the Galactic Hero became part of the taboo-breaking New Wave that hit SF in the early/mid-1960s.

Regarding the conceit in Starship Troopers that a person was only a “citizen”—allowed to vote—after serving in the military, Harrison once said, “I remember reading that and thinking: I know a lot of veterans, and they’re mostly all alcoholics or mad!”

Meanwhile Cox says, “I like the book Bill, the Galactic Hero much more than the book Starship Troopers! It is the better work… But isn’t it interesting that pro-war SF books like Starship Troopers and Ender’s Game get made into blockbuster Hollywood features, whereas a work like Bill remains unseen… up until now.” 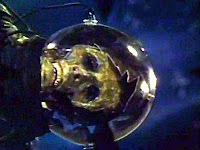 Originally, Cox optioned the book in the mid-1980s, after his success with Repo Man. He told Movie Morlocks:
“The first script I wrote was for United Artists... When they read it they decided not to develop it further because it was ‘too English, too expensive, and too anti-war.’ I didn’t know if was possible to be too anti-war! I had assumed being against war was like being opposed to sin. When I shopped Bill around the studios, the response was ‘too expensive, and too anti-war.’ Was a pattern developing? Only when I found myself in an environment full of actors and technically skilled filmmakers [at the University of Colorado, Boulder, where Cox teaches], was it possible to come up with a new plan for Bill.”

A prolific author, Harry Harrison (1925-2012), was probably best known for Make Room! Make Room!, which was the inspiration for Soylent Green. But he was also the master of the comedic sci-fi tale, creating the long-running Stainless Steel Rat space-crime series, and pulp spoof Star Smashers of the Galaxy Rangers.

As for Heinlein, Harrison says that after reading Bill, the Galactic Hero, “he never spoke to me again!” However, Harrison was a fan of the Paul Verhoeven’s 1997 film adaptation of Starship Troopers, finding the picture’s over-the-top pro-fascist stance to be “really hysterical,” and its special effects “great, great.” Cox’s production received Harrison’s blessing shortly before he died.

When asked if he enjoyed being in the military, WWII-vet Harrison said, “No. If you read Bill, the Galactic Hero you’ll see how I feel about the army. What effect did it have on me? Well, you hate the military forever and ever and ever!”

Graduating from high school in 1943, Harrison was in the “no hope” class: boys who faced immediate conscription at the age of 18. “I spent three years just waiting to be drafted,” he once recalled. 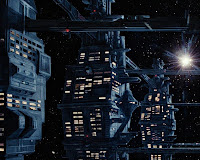 Serving as ground crew in the Army Air Corps (the predecessor of the modern Air Force), Harrison worked on computer-targeted .50-caliber machine guns; and later, in the Military Police, where he was assigned to watch over black prisoners on garbage detail.

Before he was discharged in February 1946, the author became friendly with his charges (who just wanted to finish their time quietly, Harrison remembered), and began to eat with them in the segregated black soldiers canteen. As it turned out, the meals were better. “The head chef was the salad chef from the Waldorf Astoria in New York City,” Harrison says. “Fantastic food!”
Shooting in B&W, with cheap CGI available, the production, design and effects of Alex Cox’s film of Bill, the Galactic Hero should be a snap. 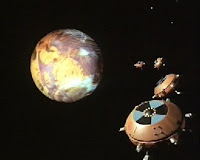 From his website, Cox frequently updates the curious on the progress of his film.
On May 25, 2013, he wrote:
I’m starting the storyboard with scene 3, where Bill wakes from a nightmare that is not a nightmare and begins his training. Scenes 1 and 2, being animated in the finished film, will be the province of the animation department, style to be determined (though we have agreed that their work will be in black-and-white, like the rest of the film).

But after recently re-reading Bill, I will say Cox has his work cut out for him to make this story truly cinematic.

Not so much due to the spaceships and giant sets (mere technical details for filming a book with no “hard” science to speak of), the novel often seems to defy adaptation since so much of the humor comes from the subterfuge of the different characters playing off each other.

This might approach grotesque slapstick if not handled deftly. The novel maintains an even, sardonic tone—very much like the omniscient third person narration of Douglas Adams’ Hitchhiker books—which balances any “whacky” extraneous elements.

Done properly, you get Dr. Strangelove; done poorly, you get Mike Nicholls’ Catch-22, or Tony Richardson’s The Loved One.

Anyone familiar with Cox’s absurdist, left-wing peacenik politics or films, especially Straight to Hell and Walker, flicks with very loyal cults, can see the director’s attraction to this anti-war, anti-authoritarian black comedy—but he could also be drawn to hapless recruit Bill’s similarity to Otto from Repo Man: someone more acted upon than acting.

Bill is the proverbial everyman who eventually wises up to a shitty situation—because it’s either that or be ground underfoot by bureaucracy, and turned into cannon fodder. The military will do anything to you, a character tells Bill, because it can. Fair has nothing to do with it. 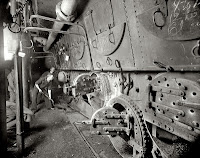 After a soul-crushing session in boot camp, the character of Bill is never even in the “heroic” position of a front-line soldier: the kid’s assigned as a Fuse Tender Third Class, stuck in the bowels of the spaceship changing the 100-pound fuses when the laser guns burn them out—sort of like the cannon crews in the old British Navy, toiling in the dark.

But he’s not out of harm’s way: when one of the fuses explodes, spraying the room with shrapnel and killing everybody else, Bill loses his left arm.

Horribly wounded, our hero staggers into the gunroom, and in true F-Troop/Carry On…-style, passes out on the controls—pushing the “FIRE” button and successfully destroying the enemy ship.

Yet at the infirmary, there’s a shortage of Caucasian left arms, and the doctors sew on a black right one, telling Bill he’s lucky he’s getting anything at all.

Although disconcerted about having mismatched skin colors and two right arms, Bill optimistically muses, “At least I can now shake hands with myself.” 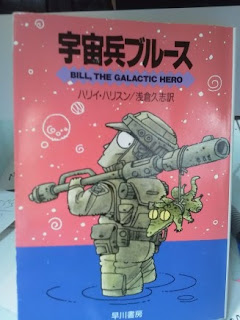 A neat concept in itself, I can’t help but wonder if Bill’s ending up with two right arms is a sly jab at the right-wing tendencies found with so many protagonists in military adventure books (SF or otherwise). Bill, the Galactic Hero not only pokes fun of the “Space Marine” sub-genre, but all jingoistic, gung-ho, pro-war propaganda, whether novels or films.

Because of his “heroism,” Bill is awarded the coveted Purple Dart medal and a shore leave to the Imperial homeworld, Helior, whose surface is completely covered by a city.

An imperial city-planet is an old idea that keeps turning up in space operas, most recently in the Star Wars films. But in Bill, the author hysterically concerns himself with such usually overlooked, commonplace bothers like trash, sewage disposal and what do people breathe when there’s no trees?

Harrison has admitted that this is a spoof of the planet Trantor in Isaac Asimov’s Foundation series, but unlike others in the old guard, Isaac Asimov found Bill amusing, and said it was “fun.”

“Isaac was a gentleman and he had a sense of humor,” noted Harrison.

On Helior, after meeting “The Emperor,” Bill quickly finds himself lost—which means AWOL—and pursued by Deathwish Drang, his former boot camp sergeant, now turned MP. A monstrous yet beguiling sketch of the ultimate drill instructor, Drang even has tusks!

In quick succession, Bill is a secret agent, a garbageman, and then a prisoner as he’s finally caught and sentenced to the brig—narrowly avoiding the firing squad with the help of a wily Arabic-Irish-Jewish attorney.

Bill is sentenced to a swampy prison planet, and it’s there where many of the book’s threads tie together, with several (almost forgotten) characters turning up again. During a climactic battle scene, Bill finally figures out that “If you can’t beat ’em, join ’em,” albeit in a hilarious way. (Perhaps Harrison felt that the “split from the whole scene” conclusion had already been used by novelist Joseph Heller in his Catch-22.) 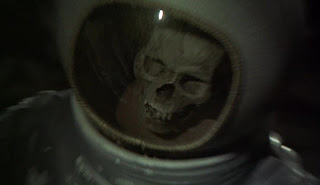 “I wanted to get my feelings about the army and the military into a novel,” Harrison once wrote. Bill, the Galactic Hero grew out of his “deep-seated suspicion of the military, and a profound hatred of war and the people who like and want war.”

And all of Harrison’s officers in Harrison’s satire are sadistic cowards; there isn’t a noble or decent one in the lot, and the war itself is really a sham, a product of imperialistic expansionism used to prop up the economy, with the “enemy” actually harmless if left alone. 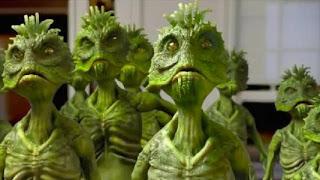 The Empire tells the recruits that their opponents are giant lizards with four arms—which is true except they’re only seven inches tall. “Seven inches, seven feet—what difference does it make?” mumbles a petulant officer when Bill confronts him with the truth. “You don’t expect us to tell recruits how small the enemy really are… We gotta keep moral up.” It always seems that any enemy’s an enemy when you need an enemy. 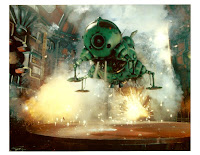 On June 13, 2013, Cox posted:
“In Bill, his own experiences were the story. Despite the insanity of it all, nothing was made up or needed to be ‘researched.’ Everything that happens in Bill had happened, one way or another, to Harry Harrison. Many of those things have happened to you and me, too. There is truth in Bill of a greater depth than mere scientific accuracy or historical veracity. Which is why it will endure, I think.”

“I got the clues I needed from Candide and Catch-22: do it as black comedy,” wrote Harrison, who has referred to reading Heller’s novel as “the crystallizing moment…Some things are so awful they can only be faced by bitter laughter. To this, I added parody of other SF.”

Since my current financial condition prohibits me donating to Alex Cox’s Kickstarter campaign, I am doing what I can by promoting this fantastic and underappreciated director and this fabulous, almost forgotten science fiction satire. Parts of this article appeared in other forms elsewhere. 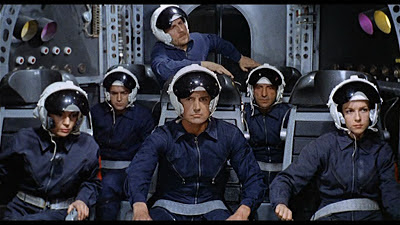 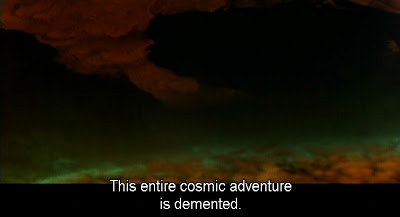 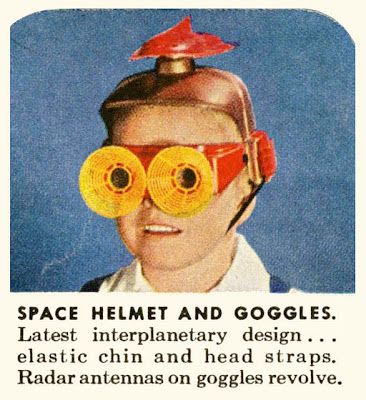