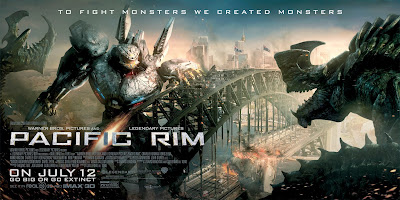 Any gripes against Guillermo del Toro’s Pacific Rim (2013) are sniggling ones: For the amount of money spent—and that bread is all on-screen—this is about as perfect a giant monster vs. giant robot flick as you’ll find.

(This, more, and the films of June, all below)
Pacific Rim is Crack for Nerds—but often the flick feels like an unironic propaganda movie, as well. The movie is pure spectacle, leaving you intellectually breathless, with the only phrases left in your head being “Wow!” “Neat!” and “Gee-Whiz!” 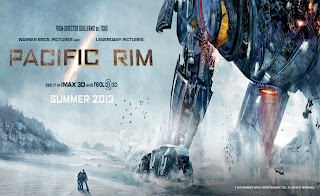 Honestly, though, it was a tad disappointing that all the robots are bipedal-humanoid-shaped, if humongous. My nerd-inner-child wanted an entire arsenal of gigantic tinkertoy weaponry! And while I wish the monsters had been more differentiated, or given more individual personalities, the film is technically perfect, and as fitting a tribute to Ray Harryhausen and Ishiro Honda as you could find.

PLOT: Monsters are emerging from a dimensional rift at the bottom of the sea, and are decimating cities all along the Pacific Coast. To fight these monsters, the governments of the world have put aside their differences and joined forces to build giant robot suits for humans to pilot in combat against the monsters. Everyone’s noble and brave, with enough back-story to humanize them enough—and that’s it, with non-stop action that pounds you into submission. 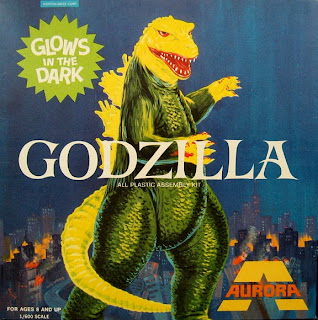 This is a movie made by and for those kids who used to take their Aurora model-kit version of Godzilla (with the glow-in-the-dark hands, head and tail) and place it in the ring with their Rock ’Em-Sock ’Em Robots.

Pacific Rim is pretty lightweight in the brain department, but I liked how in the exposition-heavy intro, you’re given the impression that the world is even more corrupt and repressive after the monsters arrive than before—especially with the movie’s scenes involving “the coast wall”: the governments think that building a giant wall will keep the monsters out, an idea one of the beasts makes quick work of, turning it to kindling. But I had to think, whose buddies got their pockets lined with that stupid idea? Of course, all this is dropped toot sweet so’s to provide more time to smash a city. 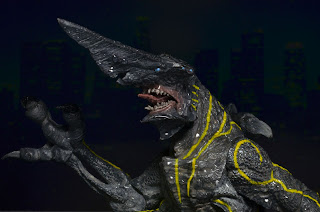 I’m also disappointed that there is nothing deeper to the monsters attacking than alien invasion—like, what if some humans had encouraged, or even asked the monsters to attack, in order to get rid of excess population, create jobs, improve the economy and make people richer? Nope, it’s a straightforward invasion: they’re bad and want our perfect planet; we’re plucky and make sacrifices to defeat them.

All that said, I enjoyed Pacific Rim a lot—especially in a theater with great air-conditioning. 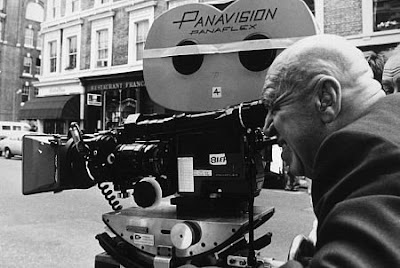 There’s one of those darn memes about favorite directors going around on Facebook like a bad social disease, where a someone tags someone and it eventually gets to everyone, and it’s finally gotten to me. 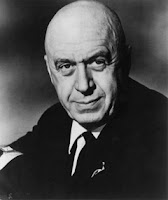 Thank you for this honor!
The now largely-forgotten (and often unjustly ridiculed) Otto Preminger was the master of the long, complicated take and the controversial topic—and is someone who needs a serious career re-assessment.
MOVIE I LOVE: SKIDOO/LAURA
Skidoo isn’t “Camp” to me: it’s a crazy, crazy comedy that works.
Laura needs no explanation.
MOVIE I LIKE: ADVISE & CONSENT/BUNNY LAKE IS MISSING (Preminger imitates Frankenheimer and William Castle, respectively, with fine results)
MOVIE I DISLIKE: IN HARM’S WAY/EXODUS/CARMEN JONES (some good scenes scattered throughout, but all these films are mostly bloated and boring)
MOVIE I HATE THAT I LOVE: HURRY SUNDOWN (for Michael Caine’s awesome awful Southern accent, and Jane Fonda fellating a saxophone)
MOVIE I STILL NEED TO SEE: BONJOUR TRISTESSE (Otto Mannix has been raving about this one for years)
HONORABLE MENTION: ANGEL FACE (Mitchum & Jean Simmons in LUST: mad love and two awesome car crashes)
SUCH GOOD FRIENDS—much better than its reputation, and flick that has aged well—this wicked satire was ahead of its time in 1971, and now is one of the better time capsules accurately depicting the soullessness of the “Me Generation.”

The release of a new Preminger film used to be an “event,” and for a long time, he could do no wrong.
One of these days, I will get around to finishing screening all of Big O.’s flicks, and I can make further determinations.

Arrested Development: Season Four (2013; created by Mitch Hurwitz)
Comedic gold, in my opinion. Excellent stuff! I love all the call-backs and the looping references.
Yes, I watched all the episodes in a few days, doing the marathon viewing. Why is that even a topic of conversation?
Anyway, Arrested Development rules: the epitome of contemporary comedy.

The Sea of Perdition (2006; Richard Stanley; eight minutes) Neat E.C. comic vibe to this tale of a lost astronaut.

BEASTS: “What Big Eyes” (1976; written by Nigel Kneale; directed by Donald McWhinnie) Starts off well, but becomes an ultimately disappointing misfire.
As I’m mining the works of Nigel Kneale, I’m discovering that his lesser known works are rightfully so. In an attempted almost post-modern twist, this episode discards the supernatural for the mundane by the third act, which is to its detriment. Patrick Magee gives a performance worthy of a Samuel Beckett play, as he plays a manic, chain-smoking lycanthropy theorist. But the tonal shift in the teleplay finally undermines Magee’s performance, especially as it makes the officious and narrow-minded animal control inspector the hero.

From Beyond the Grave (1974; Kevin Connor) Amicus anthology movies—some of us grew up with them, and have a soft spot in our hearts (and heads) for them. Peter Cushing, Donald Pleasance, David Warner and others fill out the cast in several supernatural tales all interconnected via a haunted pawn shop. Well-mannered, veddy British horror with a touch of sardonic humor.

This Is Not a Test (1962; Fredric Gadette) Wonderfully anti-authoritarian and self-consciously arty, this film could be retitled “Ten Characters In Search of a Nuclear Armageddon.” Watch it HERE.

About 80 minutes in length, the film has a lot of filler, but it is an infuriating flick that’ll make your blood boil because it says “authority” is worse than useless, it’s interfering and dangerous: hidebound and willfully stupid. Melodramatic but subversive, this flick must be the product of left-wing peaceniks!

The movie starts with a proto-fascist dumb-hick highway patrolman setting up a road block “on orders” regarding a possible nuclear missile attack, and he doesn’t let any drivers go forward or back, under the threat of violence. He essentially dooms everyone, and rather than let people live the end of their lives as they might, the stupid cop imposes a ridiculous plan: hiding in a furniture truck.

The scene with the psycho kid flipping out and attacking crates of chickens is filler, but great fun—and indicates what would be going on in the cities during a missile attack..

Threads (1984; Mick Jackson; written by Barry Hines) is possibly one of the most intense, gut-wrenching films I’ve ever seen, tied with Paul Greengrass’ United 93.

For a while there, I was on an “Accurate Armageddon” kick, seeking out films that showed the end like it would happen. Not monster-mutant visions or “Mad Max”-style adolescent fantasies—nor white-washings like The Day After, which concentrated too much on Americana/nostalgia/melodrama and not enough on the physical effects of massive radiation on the human body, or the changes in atmosphere and economy.

There isn’t an ounce of sentimentality in Threads—bleak, unrelenting horror as the bombs fall and society goes into the crapper. No food, no medicines, corpses everywhere, nuclear winter, rampant disease, it’s a world of no hope. Slow death, in a quasi-fake-documentary style. Brilliant, simply brilliant.

The Man With the Iron Fists (RZA; 2012) What starts out as a decent tribute to the “bad” kung fu movies that used to pepper NYC (whether on Channel 5’s “Kung Fu Theater” or in the variety of grindhouses around The Big Apple), becomes an overly sentimental and self-satisfied vanity projects with terrible pacing. Too often the film resembles a rap video instead of a movie, and only people who’ve never seen a real kung fu movie would be impressed.
Better to stick with Tsui Hark’s Flying Swords of Dragon Gate from 2010. Now, that’s a movie!

However, it’s fun to watch Russell Crowe channeling Marlon Brando’s perf from The Missouri Breaks as he plays a mysterious English adventurer.

The Wind Is Whistling Under Their Feet (1976; György Szomjas) A beautifully shot Hungarian western (I had no ideas such things existed!), but a smidgen clichéd with its character development.

You Don’t Know Jack (2010; Barry Levinson) Better than the usual TV movie about the enigmatic and controversial “Dr. Death,” Jack Kevorkian. Al Pacino really acts in this, doesn’t just scream and pose, and the movie is more powerful for it. Thankfully, the film doesn’t bother with the “Young Dr. K” story, and sticks to the suicide machine years.

The Nines (2007; John August) Spooky and metaphysical; neat and wonderfully astro-gnostic vision about God and the creation/maintaining of the world.
Watched because of fascinating articles at The Secret Sun.

Fright Night (2011; Craig Gillespie) Very enjoyable horror-comedy, with a high gore quotient. Never seen the original, so can only judge on its own merits, but I had fun watching this sly and fast-paced B-movie.

Mad Foxes (“Los violadores”) (1982; Paul Grey—a.k.a. Paul Grau) Good lord, this is reprehensible! A Spain-made revenge/biker flick that is…beyond the pale. Unrelentingly grim and nasty violence and sexual assault. It’s fast-paced, and always entertaining—but only if you’re a borderline nihilist. A Corvette-driving Casanova runs afoul of a grotesque and stupid biker gang—and the mayhem ping-pongs back and forth as each group takes revenge on the other, as the brutal killings pile up.

BOOKS READ IN JUNE 2013
Tentacle Death Trip by Jordan Krall—If H.P. Lovecraft and Harlan Ellison joined forces to rewrite Death Race 2000, it might look like this. Fast-paced page-turner that blows snark like John Dies at the End out of the water.

The Best of Henry Kuttner by Henry Kuttner—a collection of sci-fi stories from the 1940s; charming if dated, but sometimes really good stuff remains. Read because the short story that is the basis of the film The Twonky is included.

Fletch Won by Gregory Mcdonald—Amusing snarky fluff; perfect summer reading as Mcdonald is the master of the breezy-funny detective story.
Posted by Ivan at 1:03 PM