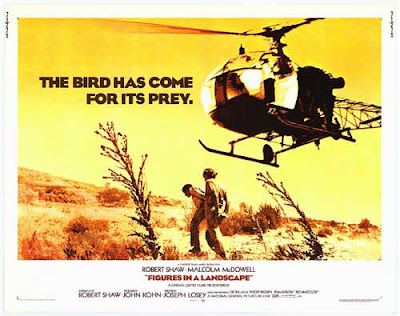 Figures in a Landscape (1970; Joseph Losey) Done right, this could have been an incredible combo of Walter Hill and Samuel Beckett—

The plot is fantastically simple: Two men (Robert Shaw & Malcolm McDowell—what a cast, right?), with their hands tied behind them, are on the run, with a helicopter chasing them.
And that's it.
However, Figures in a Landscape has something just a bit wrong with it.

It’s just a tad off—I can’t quite put my finger on it: maybe the timing, or rhythms in editing—too much information, or not enough?—
some of the dialog is a bit forced—but I am the first to admit that I did not see this flick under optimal circumstances at all: an often out-of-sync transfer of an anamorphic print that wasn’t “unsqueezed” on TheTubes of You—
Yeah, it’s gonna look suck-ass, and this film is something that appears like it NEEDS to be seen in a theater. As far as I’m concerned, there are plenty of faves that I would not have liked if I had seen them first on a small screen, such as There Will Be Blood and Gran Torino.

Cronenberg’s current cinematographer of choice, Peter Suschitzky, is one of the cameramen on Figures in a Landscape, and even on a “scrunched” version, you can tell this film often looks good, if not technically perfect.

Stand-out are the beautiful over-the-pilot’s-shoulder/helicopter POV scenes which are scored with atonal music (and I swear these scenes are practically rip-offs/homage to parts of the stargate sequence from 2001), as well as several shots of Shaw and McDowell clambering and scurrying across the arid and rocky landscape (the film was shot in Spain, in areas reminiscent of the desert the astronauts have to cross in Planet of the Apes).

The mentioning of those two 1968 science fiction classics isn’t accidental, either: because the film is very existential by not mentioning what Shaw & McD are running from, who is chasing them, nor why they were ever even in that country in the first place. And as such, Figures in a Landscape develops an almost sci-fi vibe—is this some sort of alternative reality? A crypto-fascist future?—

Meanwhile, the helicopter is the third “figure in a landscape,” and the way it is anthropomorphized, the pilots are secondary—parasitic—the chopper is the character pursuing the puny humans—also feels very much like a science fiction film, like one from Eastern Europe, where a robot or giant hand represents “The State.”
(If Figures in a Landscape "tributes" 2001, then Peter Hyams’ underrated sci-fi-conspiracy-actioner Capricorn One (1978), with its “chattering choppers” chasing astronauts across a desert, tributes Figures in a Landscape.) 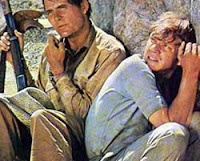 But the paranoid vibe (and the type of helicopter used) also bring to mind another 1968 sci-fi-ish cult phenom: Patrick McGoohan’s The Prisoner. It’s very easy to image Shaw & McDowell being escapees from “The Village.”
A feeling reinforced by acting styles: I’ve always felt McGoohan and Shaw’s styles of acting were very familiar to each other—a sort of super-intelligent, but mocking and nasty personality, done to cover a vulnerability they’d rather die over before revealing.
(McDowell’s acting style can also fall into this bracket, but in Figures in a Landscape, made between If… and A Clockwork Orange, he’s more of a “straight man” to Shaw’s rants, if not the only voice of reason in the film. However, if you want to see McDowell go stone cold bonkers, dig up the DVD MIA The Passage (1979; J. Lee Thompson). In it, McD plays the most outré SS officer imaginable, bringing style and verve toevery line. Personally, I think Tarantino completely ripped this part off for Colonel Landa in his WWII epic.)

That said, Losey’s track record as a blacklisted left-leaning director of politically-themed films of course reinforces the feeling that what we are watching is also in some way political—but in a semi-absurdist, deconstructivist, existential style where Man, Like Sisyphus, Struggles Eternally Against Fascism!
Describing Figures in a Landscape like “Michael Winner discovers Franz Kafka” wouldn’t be too far off the mark.
We learn about the men themselves (jobs held, philosophies, families), but never find out how they got in this predicament—they’ve obviously escaped from some sort of military unit or prison, but why were they there in the first place?—and we never learn where exactly they are.
And then the helicopter returns…

Unable to work in H’wood in the 1950s, Losey self-exiled himself to the UK, where he focused on films of a strong socio-political nature, including the excellent, and ultimately heartbreaking “preparing for doomsday”/teddy-boy mash-up for Hammer, These Are the Damned, and then a series of films with noted playwright Harold Pinter, including the wicked and scorching The Servant (both films released in 1963).

Losey wasn’t this film’s original director—that was Peter Medak (who went on to direct The Ruling Class and The Changeling).
For reasons unknown, both Medak and original star Peter O’Toole quit the flick; Losey was hired, and he then made screenwriter Robert Shaw the star.
If you didn’t know, Quint was an accomplished playwright as well back in the day; he also wrote The Man in the Glass Booth (available on Nflex Streaming), which I have to catch up with soon—
After listening to the monolog (about meeting his wife) that he gives himself in Figures in a Landscape, I can hear Shaw’s voice in his Jaws monolog, giving much credence to the rumors that he extensively rewrote the “Indianapolis” speech.

Like Otto Preminger, Joseph Losey is a filmmaker that used to be a really “big deal” in the world of movies, but recently has almost fallen into obscurity or worse, mockery.
I have been aware of both for quite some time, but had not given any critical or intellectual attention to either until relatively recently.
Yeah, their films are somewhat dated—or to be nice: “these movies are of a distinct era.”

As such, I’ve been enjoying rediscovering the films of both these directors, as well as the work of Ken Russell, Henri-Georges Clouzot, Costa-Gavras, and several others, all of whom—for whatever reasons—had been under my radar before;
I’m glad my film education is far from over!

Unfortunately, as far as I know, on-line is the only way to catch this flick, though; it’s a DVD MIA partially due to the financial collapse of its distributor, Cinema Centers Films.
The next time there’s a Joseph Losey retrospective, I hope they feature (a good print of) Figures in a Landscape. 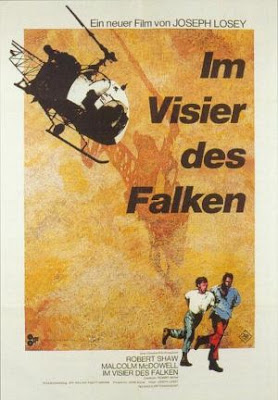