LIE #2: The Drowned City (and DVD MIA in US: “The League of Gentlemen’s Apocalypse”) 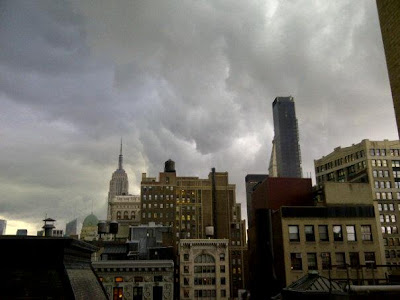 Speaking of the weather (I warned you in LIE #1 that I just might do this!): 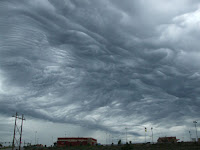 As far as I’m concerned, NYC and the Tri-State Area should accept the fact that it now has a Monsoon Season.

Every day in late-Spring/early-Summer, for at least an hour a day, we get a heavy downpour.
Often followed by bright sunshine, and later an incredible sunset, thankfully.
But sometimes we get rain for days on end—totally grey skies and drip, drip, drip from all the humidity. It’s starts making you think you’re John Doe in Seven….


This opinion comes from empirical data gathered through my own observations over the past decade since I first noticed it—one June it rained every damn weekend.

Other observations weather-wise gathered over time: I’ve also noticed that the pink pollution haze that used to only appear over the specific horizons of cities when you’d be flying into them—now, that pink haze is across the entire horizon.

Yep, I believe in climate change/global temperature nightmare (because it won’t just be warming everywhere)—I also believe, and this is something I try not to bring up around friends who have children, that we are well past the “tipping point.”
I feel that even if we turned off every factory and car right now, that that would not do anything to prevent some sort of changefrom occurring—

There are already too many macabre greenhouse gases in the atmosphere: Tierra del Fuego is a cosmic radiation zone because of the ozone hole above it! 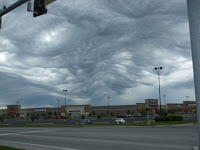 In about 20 years, New York City might have weather patterns more appropriate for contemporary New Orleans—and who knows what NOLA will be like? Underwater and oil-slicked? Abandoned and left to the gators and swamp rats?

If the waters around NYC rise roughly nine meters, you can kiss Williamsburg, Greenpoint and Long Island City good-bye, along with 90% of South Brooklyn: Coney Island, Sheepshead Bay, Flatlands—gone.
A rising sea level generator is HERE—check what happens to your neighborhood!

Most of Manhattan is untouched by a nine-meter water-rise—except the Upper East Side—snicker!—and I live on very high ground!
(My nabe, Sugar Hill, is about eye-level with the 80th floor of the Empire State Building, and will be worth lots of $$$ in the future: hee-hee!)

But I could see The Powers That Be approving a massive construction project to protect lower Manhattan (especially the Financial District), with something like a colossal sea-wall—
and to hell with the rest! And speaking of apocalypses, let us cover this definitive entry into the Cinema of Weirdness:

The League of Gentlemen’s Apocalypse (2005; Steve Bendelack)
Now, I can see why a self-referential meta-movie, peppered with dozens of horror movie in-jokes and tributes, might not ever get a theatrical release in the US, but the lack of a DVD release puzzles me.
The comedy group The League of Gentlemen made three seasons of their television show, as well as a Xmas special, and all those are available here in the states.
Luckily, I have an all-region player and friends in the UK division of my petrochemically-related employment…

Honestly, though, The League of Gentlemen’s Apocalypse is really only for those not only familiar with the show and its characters, but its creators as well!
First some background:
Very much influenced by horror films, as well as any other kind of weirdness, the TV show was set in the isolated North England town of Royston Vacey, where there is evidence of incest, inbreeding, murder, witchcraft and cannibalism.
The show was a great example of the intersecting style of sketch comedy: where different story threads and characters criss-cross against each other, forming a larger, more sinister pattern.

Dark and twisted humor, usually in dreadful to horrible taste, was the order of the day for the The League of Gentlemen, and the awful side of humor nature was explored and dissected (often literally—the show was gory)—the saving grace that many of the characters were innocents in their own way, like the way Leatherface is really like a child. They mean well, but, y’know, things happen…

If you like the comedy of the Upright Citizens Brigade (and when’s Season Three coming to DVD?), you will like The League of Gentlemen.
(BTW, the troupe gets their name from a 1960 British heist movie, where a gang of ex-soldiers pull a commando raid on a bank. The flick is now very dated, and kinda stupid, but it was a mainstay on British TV when the members of The League of Gentlemen were growing up, like The Magnificent Seven was in the US when I was growing up.)

Giving away plot point won’t spoil anything: As the film starts, we find out that The League of Gentlemen, the three performers and their writer (with the director, they all wrote the script), are planning to shut the show down—and they’ve already started on a new script with much different characters and settings.

In Royston Vacey, the Apocalypse is happening—lightning strikes, flames from the sky, hurricane winds—and under the church is “the portal” to the world of “The Creators.”
Two different teams of “locals” visit our world—and then the world of the new script—and switch places, and so on and so forth—
and meanwhile David Warner guest-stars as an evil wizard, and there’s plenty of cheeseball stop-motion monsters and gore (and references and tributes to a plethora of horror flicks—and I’m sure I missed some references as well).

As a parting gift to their fans, it’s nearly perfect. 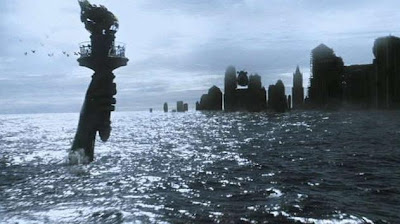 (AI doesn’t deserve this cool effects shot, so I’m giving to either The League of Gentlemen or Monsoon NYC.)

And June will be Sci-Fi month here at Lerner International—an attempted one post/day all centering on science fiction! Tune In!
Posted by Ivan at 1:58 PM

Email ThisBlogThis!Share to TwitterShare to FacebookShare to Pinterest
Labels: rain, the future, The League of Gentlemen’s Apocalypse, weather