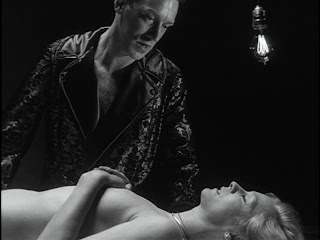 [This post is part of the Viewer Vomit #7 blogothon organized by The Moon Is a Dead World. And make sure to check out the various links to other bloggers' reviews; some very interesting viewpoints out there indeed.]

Hour of the Wolf (Vargtimmen; 1968; Ingmar Bergman) is an anguished, painful, intense film that had been made with exquisite precision.

I’m willing to admit that this is a film I do not “get” intellectually; but emotionally it gets under your skin—or it did to me, at least—disturbing and confusing this viewer, leaving much food for thought—and worries about sleepless nights.

An incredibly personal film, full of dense symbology unique to itself, Hour of the Wolf is the result of director Bergman trying to make sense of a nervous breakdown he had at the time.


No description of Hour of the Wolf would do justice to the flick’s 200-proof weirdness—
Honestly, I think David Lynch’s description of his own Eraserhead (“a dream of dark and troubling things”) would be a better synopsis for this film, but here goes:
A self-tormented artist (Max Von Sydow, emotionally gnarled and twisted, effectively expressed mainly through his body language) and his pregnant girlfriend (Liv Ullmann as saintly innocence personified) are summering on an isolated island, when neighbors from a nearby castle (they could be real people, the past brought to life, projections from the subconscious, or even ghosts—we are never quite sure) begin showing up regularly, first offering advice and invitations for friendship… 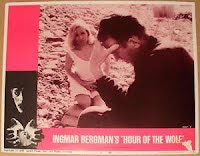 After the ghosts (whom Von Sydow calls “the cannibals”) have brought up a series of bad memories at nightmarish dinner party that’s the antithesis of fun—they no longer pretend to be polite, pouring on warnings and threats…

No run-of-the-mill ghouls and monsters here, oh no. But then, the director never set out to make a horror movie specifically—that’s just the descriptive we (reviewers and the public) have applied to the movie to help our overly-compartmentalized brains categorize Hour of the Wolf—
All Bergman is trying to do is exorcise his personal demons, get them out of his system—and into ours.
Just like all great artists should do…

While sometimes confusing or mysterious, nothing in this film feels wrong or out of place—the crystal-clear B&W cinematography (by long-time Bergman collaborator Sven Nykvist) aids the viewer beyond beautiful imagery; it reinforces the feeling, in both the film itself and how the film is made, that everything is being done for a purpose.

Aside from the fact that many, many scholar consider Ingmar Bergman one of the essential filmmakers of the 20th century, fans of the cinema of the fantastic should also pay attention to this director’s work—not only for its fantastical/spiritual/mysterious qualities (that have often caused great inspiration in others—more on that in a moment…),
but because Bergman plugs into intense emotions and nightmarish states—perfect crossover material for horror films.

The greatest thing that struck me on my recent first-time-viewing of Hour of the Wolf, however, was how much it reminded me of Kubrick’s The Shining, not just the unique ghosts in the giant empty castle in a barren landscape, but
especially the man-woman dynamic: Von Sydow and Ullmann’s relationship is absolutely the template used between Jack Nicholson and Shelly Duvall, but The Shining increases the volume to “11.”

Big Stan K. was well know to R&D the living shit out of his projects, and he has been quoted as saying that he “tries to see everything”—so there’s no way he wasn’t familiar with Hour of the Wolf’s tropes and ideas.

Was Kubrick trying for some sort of Ingmar Bergman-William Castle mash-up? (Because you can’t tell me Stanley wasn’t aware of haunted house movies like Castle’s 13 Ghosts, as well…)

It gets better: According to Cracked.com, SK “borrowed” some themes (like the ax to the door) from 1929’s silent Swedish horror classic, The Phantom Carriage—
then Movie Morlocks credits a scene from Nigel Kneale’s Quatermass II for the inspiration of “All work and no play make Jack a dull boy.” (If you’re going to “appropriate,” why not from the best?)

Personally, I think Kubrick’s decision to adapt King’s book was not only a grab at greater market recognition, but a “borrowing” from the playbook of his former partner James B. Harris: the pulpier the source novel, the more opportunities to plant weird seeds in fertile ground, and explore offbeat topics—and less worries about criticism for straying from sacred texts. This was a tactic Kubrick continued by adapting The Short-Timers,by Gustav Hasford, for Full Metal Jacket.
(James B. Harris and his films will be topics of future posts.)

And the twins in The Shining? Dunno where Big Stan got that idea, but everybody thinks twins are creepy…

(BTW, I am definitely not one of those who believes that Kubrick’s work on 2001 was actually a cointelpro towards faking the Apollo landings—and then, to assuage his guilt at this colossal charade, Stanley then made The Shining and filled it full of secret codes “revealing” that the lunar missions were faked. But I am eager to see Room 237, the documentary about fans of The Shining and their often outré theories regarding the movie.)

Bergman’s influence on the horror genre goes beyond inspiring awful Woody Allen comedies—
Aside from my speculations regarding The Shining, I’ve read that the flash-frame of the devil face in The Exorcist was inspired by Bergman’s Persona (with the devil-face itself inspired by the demon-mask from the incredible Japanese "ghost story" Onibaba), and more blatantly, Wes Craven remade Bergman’s The Virgin Spring as The Last House on the Left.

A great and grand entry into The Cinema of Weirdness,
Hour of the Wolf is currently available for viewing at Netflix Streaming, which has a number of Bergman’s films, including the aforementioned Persona (inspired by the nervous breakdown that also created Hour of the Wolf) and The Serpent’s Egg (his Weimar-era conspiracy thriller with David Carradine, produced by Dino De Laurentiis, and Bergman’s only real foray into “Hollywood blockbuster” commercial cinema), both of which I mean to watch soon.

[Meanwhile, over at our evil twin brother’s site, The United Provinces of Ivanlandia, there’s a sort-of semi-tribute to Hour ofthe Wolf HERE.] 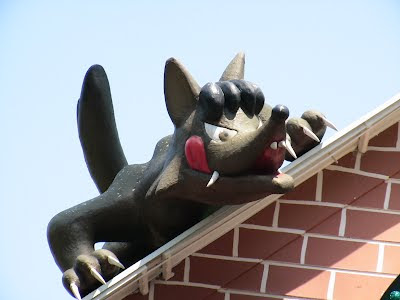 (A cheerful image to help wash the angst out of your head; I took this on a trip to Japan in 2006—this is a detail from a ride at a very quaint Tokyo amusement park for children.)
Posted by Ivan at 7:47 PM

Email ThisBlogThis!Share to TwitterShare to FacebookShare to Pinterest
Labels: Ingmar Bergman, James B Harris, movies, Stanley Kubrick, The Hour of the Wolf, The Moon Is a Dead World, The Shining