The Gate (1987; Tibor Takacs) is an insightful and honest look at pre-adolescent growing pains, with incredibly realistic performances by its child cast (it never feels like “acting”)—rolled into a fantasy/horror films with goblins, stop-motion demon lords, and a portal to a sinister dimension.

Feeling abandoned by his older sister, lonely and pudgy 10-year-old Stephen Dorff accidentally creates an opening for demons to get through to our world.
With the help of his uber-geek best friend, Dorff learns that spells to close the gate are hidden in heavy metal songs—backwards!

After her party is ruined by satanic forces, Dorff’s sister gets on-board, and the trio struggle to stop the demons (“These guys are older than the Bible!” squawks the geek) from devouring Earth… before mom and dad get home…

(Minor Spoiler: As the credits roll, it’s great to imagine HOW the kids are going to explain the wrecked house to their parents. But the film’s characters are so well-rounded, so human and humane, that you could first see the parents asking “Are you kids alright? You’re not hurt, are you?” and then, “What the hell happened to the house!?!”)

Excellent at building tension, but told very straightforwardly, The Gate is a low-budget, low-key wonder, proof that horror/fantasy flicks with kids are more than “simple entertainment.”
The Gate needs to be rediscovered and gather a wider fanbase—it’s as good a movie about growing up weird as the similarly themed The 5,000 Fingers of Dr. T, Willy Wonka and the Chocolate Factory (1971), or 1953’s Invaders From Mars.
Like those films, The Gate has a very dream-like (I guess now we’d also say “Lynchian”) quality to it, but unlike two of them, it thankfully never reveals that “it was all a dream.”

Similar to 1981’s equally “needs-to-be-discovered” The Pit, but less angry and mean-spirited (and psychosexually creepy) than that macabre fable, The Gate is a positivist spin on the “secret friends doing your bidding, and things go awry” fairy tale.

Rich in details (check out the teens’ matching 1980s color scheme!), and full of old-school effects (like forced perspective sets, stop-motion animation, optical-printer visuals, miniatures, and so on)—I see these “old” flicks, and I still think it’s too bad CGI overtook all effects and homogenized them to such an extent—
it’s like a pre-adolescent X-Files meets Poltergeist meets In the Mouth of Madness, and maybe The Gate’s lack of recognition stems from it’s being ahead of its time, much like 1991’s Eerie, Indiana (which The Gate could really be seen as a prototype for).

The Gate is still available for viewing via Netflix Streaming; that’s how I saw it—and so should you!

Also recently screened:
The Gates of Hell (1980; Lucio Fulci)
Zombie (1979; Lucio Fulci)
I didn’t need to see these flicks, but going out to the The Forum Theater Arts Center in Metuchen, N.J., on a Friday night to see this Fulci double-feature (a gorehound’s delight) was worth it for maximum nostalgia value, for that “old grindhouse vibe”:

the bad prints with the obvious scratches and damages before a reel was going to change, the widescreen (you forget how many of these movies were in Panavision!), a dingy but decent theater, seeing it with friends, strangers talking to the screen, everybody freaking out when some good gore splatters the screen, the whole shebang—including real popcorn!

I’d never been to the Forum before, but it reminded me of the slew of theaters I’d spent much of my kidhood in—all the shithole palaces on Flatbush Avenue, the 1950s theaters on Kings Highway, the vaudeville temples carved up into the first multiplexes, like the Oceana, the Kingsway, the Marlboro, the Kenmare, and so on. (With all those theaters, who needed Times Square?)
Sponsored by Crystal Plumage Films, this series is worth it—
As for the movies, jeez, it’s Fulci’s classics. Whaddya expect? A detailed analysis? (But I'll tell ya, I love how, at the end, when the zombies are crossing the Brooklyn Bridge—see photo at the top of the post—the traffic below is "business as usual," no sign of the Zombie Apocalypse, no sign of any trouble at all, actually!)

Another reason this was a fun evening, worth the trip: I won a DVD of Cannibal Holocaust in the show’s lottery! Yee-HA! 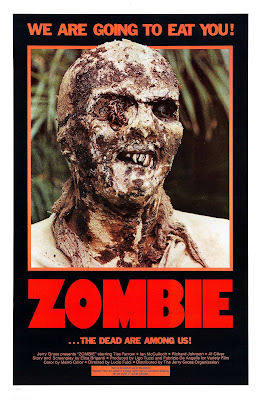