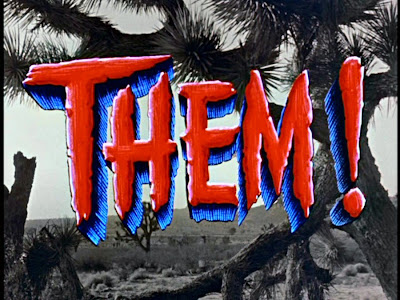 Them! (1954;Gordon Douglas) takes a potentially harebrained starting-off point, and by playing it as sane and sober as possible, ends up creating a classic film, and one of the best giant monster movies to come out of the 1950s, as well as an exceptional “cop flick.”

The plot is simple enough: Due to radiation from atom bomb tests, ants in the New Mexico desert have grown to enormous proportions.
Police and federal authorities destroy the New Mexico colony, but evidence shows that two young queen ants have escaped; flying off before the nest was attacked.

No new super-weapons are needed against the big bugs; bullets and bombs kill them just fine—but it’s a race against time to stop them before they become entrenched. They can breed fast enough to repopulate a colony (several hundred to several thousand ants) in a matter of weeks, and are incredibly strong and vicious.
Not only that, they’ve shown a taste for human flesh…and they’re hiding somewhere in the Los Angeles area…

The film treats its (perhaps silly) thesis of irradiated ants growing humongous very seriously, by both the characters in the film, and the filmmakers themselves.
I think why Them! completely holds up after all these years is because it’s primarily a well-scripted, well-acted police procedural. 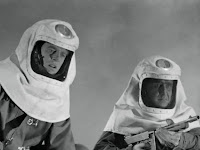 The horse-sized ants have no superpowers or anything else: they haven’t gotten smarter or can breathe flames.
What we have is ants acting like ants.
But now that they are so huge, they are competing with man for/as food sources.

(Some historians bring up the “Red Scare” going on in the US then, and try and postulate that Them! was, like Invasion of the Body Snatchers or Red Planet Mars, some sort of “commie allegory.” But if so, it’s a leaden and heavy-handed political message, completely lacking any tone or subtlety, a message that really has to be forced on the film.)

NERD ALERT!!!
Of course, however you might try, even if you got an ant to that size—heck, even if you got one to grow only to the size of a small cat, you still couldn’t keep it alive: Ants have no lungs; our atmosphere's air pressure of 14psi forces oxygen through the membranes in their exoskeletons. Any larger, and that 14psi doesn’t work to push air in.
Also: any larger, and an ant cannot walk—it would be too heavy for its own exoskeleton (and reinforcing the exoskeleton would make the critter to heavy to walk). Only in the oxygen-super-rich atmosphere of prehistoric Earth could bugs be much larger than now. 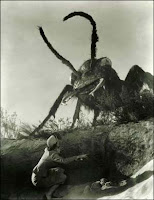 That said, once you accept the gi-ants concept, you are rewarded by a film that no longer needs to you to suspend disbelief. All the actions of the authorities and military are credible and grounded.

Like a grandfather to The X-Files (minus the supernatural), where a smart, self-reliant and sexy female scientist and a square-jawed he-man FBI agent fight a terrible unknown force—with much assistance from her brainiac ant-expert dad and a decent and brave desert policeman—
the film is taut—nary a wasted moment, and it also shifts genres as the story progresses:
Starting as a mystery—a little girl lost in the desert; a wrecked camper; and a destroyed grocery store are discovered by some New Mexico state troopers, one of whom goes missing himself soon after.
When the culprits are revealed as gi-ants, this science fiction element makes the film a war picture, as machine guns and flame throwers are busted out: there’s a problem, and it needs to be solved—let’s go!

Later, while searching for clues of the young queen ants’ whereabouts, the viewer is returned to the police procedural, as clues, leads and tips are followed. Anyone who may have seen something is held and questioned, even drunk tank dipsos.

BTW, My stepdad and I used to watch Them! whenever it was on TV back in the day—usually on the now-Fox-but-then-WNEW, channel 5—
and for the next week after, he’d randomly shout “Make me a sergeant, charge the booze!” like the geezer in the nuthouse that Arness questions. And that old geezer was played by Olin Howard, who in 1958 was the first victim of The Blob. Poor guy couldn’t catch a break…)

Of course, horror runs throughout this film as humans are torn apart by the huge beasts, with the accompanying cries of agony, the nasty click-click-click of the ants’ mandibles, and the omnipresent eerie high-pitched oscillating whistle/whine of the their antenna communicating.
(If you’re wondering what a contemporary version of “man vs. giant bug” might look like, I recommend the excellent bug slaughters in Paul Verhoeven’s 1997 Starship Troopers: maximum splatter-punk gore, with humans sliced and diced every which way.)

Female lead/ant expert Joan Weldon is very easy on the eyes, but she becomes ultra-sexy as she eschews gender roles and outmoded conventionality in the search to find the bugs’ big secret—and she can be the most cold-blooded of all, as she orders ant genocide behind a tight rubber gas mask.

And credit to FBI man James Arness’ character for acknowledging her as the expert with the minimum of fuss.
The film states that this job is tough enough without added baggage—just as the film itself knows it’s got enough going for it without having to throw in superfluous junk, like mushy romance, or contrived human villains interfering with the investigation.

There are genuinely moving moments in the film, as well, like one major character’s heroic death (its aftermath shot like something set on an island in the Pacific in WWII), or when the little orphaned girl regains her memory, and freaks out, shrieking, “THEM! THEM! THEM!” as she relives her family being massacred by mammoth insects. 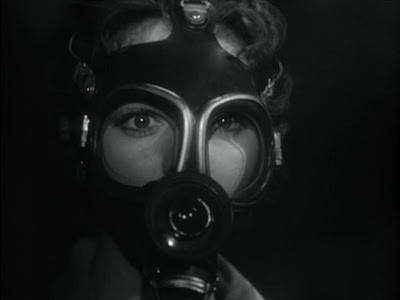 This picture is also a character actors cornucopia: Dub Taylor, Fess Parker, and a very young Leonard Nimoy, among other recognizable faces, have roles, all delivering snappy memorable dialog. Screenwriters Ted Sherdeman and adaptor Russell Hughes (from a story by George Worthington Yates) are to be commended: even the most minor characters are remarkable, and they often deliver a lot of complicated information in an unforced and effective fashion.

Brooklyn’s own Yates has had a very interesting writing career, heavy in genre product, but deffo across the board: he also wrote King Kong vs. Godzilla, Earth vs. the Flying Saucers, George Pal’s Conquest of Space, and many more.

As for the effective, if rickety, rod-puppet production-design for the ants? Attributed to an uncredited Dick Smith, I think it is swell; especially as it allows for more human/ant interaction—the optical effects then would not have allowed the film to be as action packed, or with as many multiple camera angles.
There’s just something about the somber mood of Them! that doesn’t allow these obvious effects to be mocked, either. We can all see how fake-looking they are, but because the filmmakers and the characters believe, so do we. And we can tell that they’ve put a lot of work into the ugly brutes—puppets, sure, but nightmarish puppets even more importantly.

NOSTALGIA NERD ALERT!!!
As a kid, rotten nerd that I was, I also “knew” that Them!’s ants looked nothing like real ants did, like we’d seen in nature documentaries or even the short film Them!’s insect expert (Edmund Gwynne) shows the Pentagon early in the movie.
But because I loved the flick so much, even as a kid—wonderful nerd that I was—I “knew” that the gi-ants of Them! had been mutated in more than size, so that was why their mandibles looked like scimitars instead of the serrated, interlocking blocks of wood of “real ants.”

In the comments of the now sadly defunct The Horror Blog, writer/reviewer/critic Jeff Allard wrote, “[Them! is] definitely set-up with a strong ‘real world’ vibe to it. It never seems campy like some of its atomic-age contemporaries, like Tarantula.”

Them! never drifts into “camp” territory like The Blob or The Deadly Mantis—
nor suffered from budgetary constraints like The Giant Claw or The Giant Behemoth—
nor, like Bert I. Gordon’s The Beginning of the End (elephantine grasshoppers in Chicago), or the much-loved Gorija, came up with another fantasy to fight the first fantasy—that is, they use a new secret weapon: in Gojira’s case Dr. Serazawa’s oxygen-destroyer, or in The Beginning of the End, with a Pied-Piper noise generator that draws the grasshoppers into the lake to drown.
(Harryhausen’s big radioactive critter flicks, The Beast From 20,000 Fathoms and It Came From Beneath the Sea, also suffer from “magic bullet” ending to slay their monsters.)

Other films might have a more rabid fan base, but by virtue of being the most serious and logical, Them! has managed to remain the freshest and long-lasting of the 1950s giant monster movies. 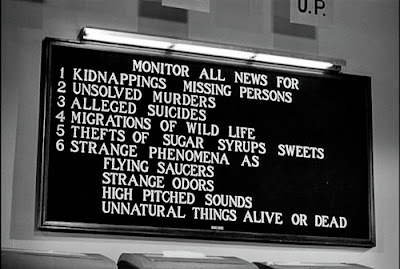 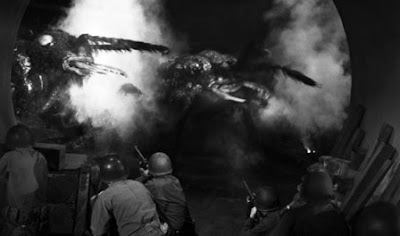 Email ThisBlogThis!Share to TwitterShare to FacebookShare to Pinterest
Labels: ants, sci-fi, Them 1953