[Not to say that essentially every movie couldn’t be improved by being severely chopped down—but let’s stick to genre product for now, this is Sci-Fi June after all….] 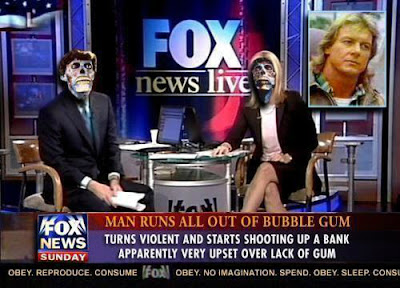 They Live (1988; John Carpenter) is the premiere example of the type of movie that, had it been 45 to 52 minutes in length, would have made a perfect episode for The Outer Limits, that legendary early-1960s sci-fi/thriller/horror anthology TV show (revived in the 1990s).

There are several sci-fi films, mainly contemporary, usually lower budget B-movies, with off-beat sometimes controversial takes on genre situations; I’m not talking “tentpole” flicks like the Transformers movies—(partial list below)—
and all these movies could be edited down to 45 to 52 minutes, and would be great as an episode of The Outer Limits.

But while those movies would need trimming throughout to make the grade (but especially in their early sections), you could let They Live unspool uninterrupted from the beginning until a specific, certain moment roughly 40 minutes in, and like I said before, it’s perfect.

Potential episodes of The Outer Limits include films like:
Eduardo Sanchez’s chilling UFO-abduction nightmare Altered, Duncan Jones’ Moon, Apollo 18 (which I liked!), The Crawling Eye, Alternative Three, Cube, Killer Mountain, Journey to the Far Side of the Sun, The Cabin in the Woods, Chosen Survivors, Splinter, Triangle, Salvage, Westworld, The Reef, Troll Hunter, and that movie about the genetically-altered dogs on the island that had eaten everything else and look, here come some teenagers in a boat!; and a whole lot more—
Feel free to add your own nominees to the list in the comments—
(And I honestly think that if we still lived in a time where sci-fi anthology shows were popular, many of these films would’ve been steered towards that direction.) 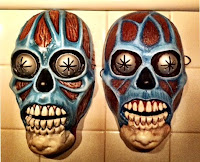 It’s doubtful anyone invested in genre filmmaking or The Cinema of Weirdness is unaware of the film They Live—but perhaps a recap is necessary:
Like some Steve Ditko-illustrated noirish sci-fi tale from Marvel’s early days, the flick’s about a shlub who discovers The Big Secret.
We meet John Nada, an everyman drifter who’s wandered into Los Angeles, looking for work in a bankrupt America. After witnessing some sinister and excessive activity (blind preachers spouting crazy talk being carted off by mean cops; ubiquitous helicopter surveillance; addiction to TV being interrupted by pirate broadcasts; brutal attacks by SWAT on homeless camps; hyper-rampant materialism; and more), he finds a pair of magic sunglasses.

As cornball and fairy tale as the glasses may be, Nada finally suddenly sees the world as it is: subliminal messages everywhere, under all advertisements and television broadcasts, and disgusting alien space ghouls pretending to be human: All white people, and usually rich yuppies or imperious business types.

Like some Jello Biafra fantasy, the “subliminal” messages are blunt and obvious:
OBEY, MARRY AND REPRODUCE, NO INDEPENDENT THOUGHT, SLEEP, and best of all, on every piece of currency: THIS IS YOUR GOD. 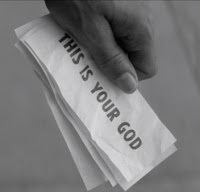 Meanwhile, camouflaged sonic equipment beam “Sleep… Sleep… Sleep…” to the crowds, and hovering stealth mini-saucers scan from above.
Nada sees it all, and is stunned—because now the world all makes sense.
And that’s where I’d end the flick!

Of course, being a John Carpenter film (instead of a Joseph Losey movie, for instance, which would place all political messages at the forefront to the detriment of any “entertainment”), the action kicks in, including that infamous and stupid 11-minute fight (which is loved, natch, but really necessary?), leading to the mini-apocalypse on the roof of the TV station, and the shutdown of the “signal.”

Those flicks I’d mentioned before often feel really padded out in spots, usually in the beginning, as “character” is trying to be “developed.”
While with
They Live, I feel that if the Carpenter’s film had caught in the gate and melted immediately after the scene where Nada sees all the “real” messages on the signs, but just before the “kick ass and chew bubblegum” moment, I would have been fine with it.
The film’s message had come through loud and clear.

The movie is perfect up till then, every moment building mood, often tension; it’s a growing and possibly dangerous mystery—more unnerving that the police are involved—genre fans will remember that in 1953’s Invaders From Mars, both versions of Invasion of the Body Snatchers, I Married a Monster From Outer Space and It Came From Outer Space (films director/writer Carpenter was certainly aware of), law enforcement was one of the first segments of humanity absorbed into the aliens’ conquest plans.

In those moments of discovery with the sunglasses, the metaphorical truth of our world is shown: the wealthy plutocrats are invaders stealing our lives for the solipsistic purpose of making more money, with the power-hungry more than willing to aid them.

My version of They Live would end on a very open-ended message that
would fit nicely with Carpenter’s style of ambiguous endings, while really smashing home the hopelessness of the situation.

Now, consider this: What if They Live,
released by Universal Pictures, now a subsidiary of mega-huge media/internet/phone provider Comcast,
was part of some master cointel psywar ops to offer a panacea to the segment of the population just a wee bit smarter than the rest of the sheeple?

It may be a “cult item,” but They Live had never been unavailable in home viewing format, and Carpenter didn’t have to fight to get it on DVD (like Peter Watkins with his hypercritical left-leaning borderline sci-fi dystopic visions, Punishment Park and Privilege).

Meanwhile, any agitprop that comes through The System is suspect—what are the messages behind the messages?
The film and its makers’ hearts might be in the right place, but are they being used in a way that may be ultimately detrimental?
Does someone wearing an “OBEY” shirt ironically make a protest?
What if they wear that shirt and only think it refers to a skateboard company?
So…now, it’s “cool” to OBEY?

Certainly They Live is a validation of some paranoid brainiacs’ fears—“It is a weird conspiracy that’s controlling the world!”—but also leads down a false path, as if maybe we could find their control box and shut down the subliminal brainwashing signal—but
there are no alien space ghouls pretending to be human; and the film offers hope of a rescue that is never coming: no sullen drifter is gonna bring down The Man (even if The Man is an alien space ghoul).

And after having their suspicions confirmed about the reason why The Powers That Be are so greedy and uncaring, how many smarter-than-average viewers did nothing but return to their drugs of choice, whether glass teat or glass pipe?

They are snug and smug in the knowledge that they were right—here’s a piece of cinematic art as evidence—and besides, what can only one person do?

I saw the movie in an almost-empty house when it was first released in the fall of 1988, at some now-gone theater in the Kips Bay area, and I didn’t start any revolution.
The increasing number of CCTV scanners I saw were proof that the surveillance security state is here, now, and doesn’t need flying saucers, but I shrugged.

If anything, I wished the movie was true, so the disgusting actions and policies I saw going up all around the nation—and continuing today—were explicable. Otherwise, how could people be so cold and callous and greedy?
Now I know, humans are evil, and
They Live Right Here, Right Now and They Are Sociopathic Plutocrats!

My roughly 45-minute truncated version of They Live would not start any revolutions, but it might be more disquieting, more disturbing.

About cutting down these films—I’m in no way saying something like Videodrome or 2001 or Ikarie XB-1 should be turned into some 45-minute cinema salad!
It’s just that B-movies these days often don’t have enough for 90 minutes, and tend to pad things out.
Back in the days of drive-ins and double- and triple-features, flicks were made that were only 60 minutes or so, like Attack of the Crab Monsters (62 min.), Robot Monster (66 minutes of unsung Dadaist genius!) Not of This Earth (67 min.) and I Was a Teenage Werewolf (almost an epic at 76 min.).

Many of the movies mentioned earlier would have so much more oomph had some of the more extraneous time-killing bits had been excised.
Y’know, if cut down to the length of an Outer Limits episode.

Here are a couple of fun links, regarding They Live:

—How to Make a They Live Mask

—Long interview with special effects wizard Jim Danforth, creator of the film’s matte paintings, and a frequent collaborator with John Carpenter. (The image immediately below is one of Danforth’s shots for They Live.) 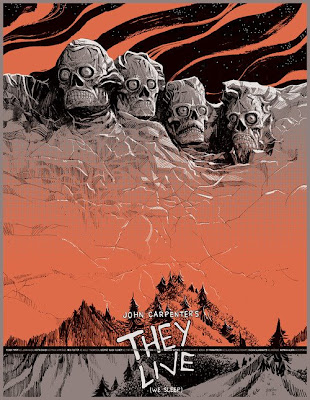