[This is the first installment of LERNER INTERNATIONAL’s “Sc-Fi June” month-long celebration of science fiction—with much more on its way! Thanks!] 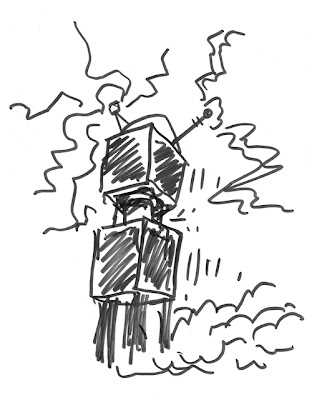 Kronos (1957; Kurt Neumann)
When I was a kid—oh, who am I kidding? I still do it: I doodle the giant robot from the 1957 film Kronos obsessively. (example above)

Not that I don’t think the flick’s a snoozer on the whole, but
Kronos is my favorite robot from the movies. Sure, sure, sure, other robots are better, cooler, more agile, smarter, have a fascinating personality, can get drunk, look like a hot chick, speak 8,000 languages, be more awesome, fire .50-calibre rounds out of their butt—whatever. I’m sticking with the Big K. 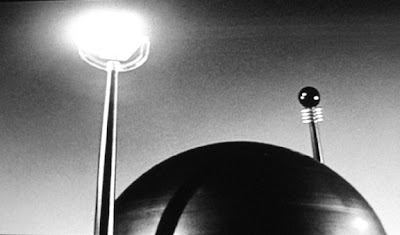 It’s the stupidest design, but the most perfect as well in its simplicity: Two black boxes, a thick pole to connect them. A dome on top with two aerials (my wife loves the cute rotating antenna!), four pile-driver legs, and some sort of rotating energy beam underneath (a stabilizer, perhaps?).
No face. No voice. Zero attempt to anthropomorphize.
It’s so big that our heroes can fly a helicopter and land on top of it.
(When they do that, you get a cool glimpse into the machine’s innards, and see some sort of extraterrestrial neo-cubist puzzle-box—I love it! (see below))

And the structure/robot/alien is as unstoppable as it is impassive, zapping and crushing everything in its path, leaving parallel grooves pounded into the earth where it has passed.

Who wouldn’t doodle Kronos obsessively as a prayer for a boring meeting to be interrupted?

Aliens have sent this Big Black Box to Earth to suck up all our electrical and atomic energy—
Which makes no sense at all—these spacemen can send a huge flying saucer billions of light-years across the cosmic void, but have no concept of utilizing existing solar or geothermal power that might actually be closer to their home? (Yeah, I’m a nerd.)

Anyway…
After Big K. crushes and sucks it dry of energy, it heads for
—but our intrepid genius-scientist heroes (lead by the wooden Jeff Morrow, of This Island Earth) thwart the invaders’ plans, just in the nick of time.
(Slight spoiler: When Kronos blows up at the end, with all the force of a stock-footage H-bomb test, isn’t the big machine almost right on top of ? I mean, how’s that gonna help the City of ? Oh well…)

Released by 20th Century Fox, but produced independently, Kronos was a staple on afternoon TV when I was growing up.
It is another of those old school sci-fi or horror flicks that actually benefited from the butchering from editors at local TV stations who needed to make room for more Crazy Eddie or Carvel Ice Cream or “Oh, DiAne!” or Roll-Roaster ads.

These editors (bless their mercenary hearts!) would chop out anything that was boring, leaving only the slightest plot sometimes.
For an afternoon movie program like the 90-minute The 4:30 Movie on ABC Channel 7, that meant that a film—which was usually 90 to 120 minutes—had to be cut to roughly one hour to make room for all the ads.

For a flick like Kronos, though, that sort of thing only helped.
Although only 78 minutes, it feels longer—mainly because the human element in film is dull.
And I mean the “human” scenes are so entropy-intensifying that you rush into the “arms” of Kronos, wishing it would be stamp-stamping its piledriver legs across the painted landscapes again!

One positive note:
If you’re like me, and FF’ed through the majority of the (puny) human segments of this movie (thus reducing their impact on your memory),
soon the overall look of the film Kronos, because with its excessive use of stock footage, much of it hardly matching, and the inventive and inexpensive optical effects (waves of water superimposed over the giant robot to indicate waves of energy), the images become even more fascinating, bordering on an art project.

The effects were created primarily by Irving Block (who wrote the story for Kronos, as well as Forbidden Planet) and his business partner Jack Rabin (the men were two of the producers on the film, as well), both of whom had long histories working on shoestring budgets.
I have a great love for these old school outside-the-studio-system special effects men who made so much out of so little, who, like the shadowmen of Japanese Kabuki Theater, must rely on our most efficient suspension of disbelief, along with the acceptance that an “obviousness” is part of the show. (Kronos also boasts a fun, over-the-top, very “science fiction” music score, that’s heavy on the theremin.)

Kronos is often available at YouTube—if it’s not at this link, just snoop around the webs; like a bad penny Kronos always turns up.

And speaking of art:
You cannot tell me that Kronos didn’t influence the sculptures of Donald Judd! (see immediately below) 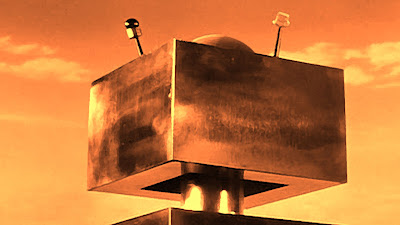 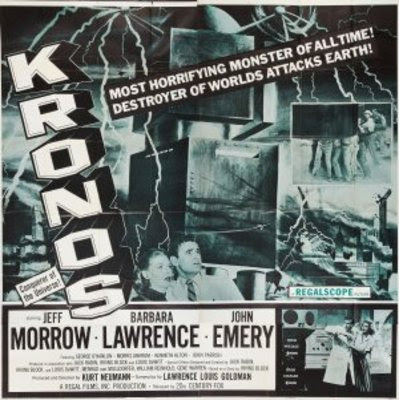