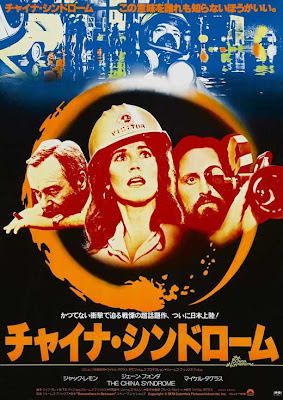 The China Syndrome (1979; James Bridges) is the type of film I include on science fiction lists to remind people that it’s not always about spaceships, the future or robots—
That there’s no reason a fictional film about a real piece of scientific technology like nuclear reactors couldn’t also be in this all-embracing genre—especially when the film in question is about that science going awry.

China Syndrome director Bridges had previously written the screenplay for the extremely recommended sci-fi thriller Colossus: The Forbin Project (1970), a very serious and sober look at a supercomputer’s takeover of the world.
Set maybe a couple of years in the future, Colossus didn’t go overboard on the new tech (unlike its unreadable source novel), only going forward with the idea of a new kind of “souped-up adding machine” being put in charge of US nukes, and then taking charge of everything, since it’s analyzed the data and determined it’s the best man for the job.

This sort of non-exploitive attitude continues in TheChina Syndrome—it is a conspiracy thriller and a drama, not a disaster movie (and then it would solidly be in sci-fi territory), and if it hadn’t gotten so damn “lucky” to be released a couple of weeks before the Three Mile Island disaster in Pennsylvania, the movie might only be remembered by a few film nerds.

The story:
While putting together a fluff piece on a local power station’s new nuclear reactor, TV reporter Jane Fonda and her cameraman Michael Douglas (in full-on revolutionary hippie mode; he was only going to produce the film, and had to step in when Richard Dreyfus dropped out) witness from the overhead observation booth (where they can see, but not hear), some sort of emergency in the control room, resulting in a tremor going through the building, and chief engineer Jack Lemmon freaking out about something. , meanwhile, films the entire thing surreptitiously.

Later, the plant is given a clean bill of health, but Lemmon suspects the inspectors were tricked with doctored data.
With the help of the cameraman and then Fonda, Lemmon tries to do right, but is routinely thwarted by corporate unconcern and greed. He becomes genuinely concerned after it seems like attempts are being made on his life, and strange cars seem to be following him.
Finally, in an effort to be heard, an armed Lemmon takes the nuclear reactor control room hostage…

The first time I saw The China Syndrome was on its original release, a couple of weeks after the incident, when most of rushed to see the flick.
It’s nice to say that the flick still holds up as a sociopolitical thriller—
maybe more so in the wake of : we now know what could happen to a major city after a meltdown.

While definitely entertaining and well-paced, The China Syndrome is also a somewhat schizophrenic flick: Sometimes you’d think that it was really about pretty news bunny Fonda trying to break through the glass ceiling, instead of a conspiracy thriller about greedy and irresponsible nuclear power companies gambling with the lives of millions.

Not that Fonda doesn’t give a good perf—but the execs at the network thinking of her as only a pretty face with no journalistic abilities should be a subtext as to why they don’t believe her story about the initial reactor mishap—not an entire plot thread in itself.
(Of course, I can see Fonda’s part getting so big as part of the whole “star throwing their weight around” scenario; or else to entice her, Bridges and producer Douglas agreed to beef up her part; or something along those lines—it’s an old H’wood story, and Jane was headlining this flick, riding high after the Oscar for Coming Home. But honestly, the majority of her scenes really feel “bolted on.”)
(On the flipside, maybe because he was so busy with the details of producing the film, is a very giving performer. He has a couple of heavy scenes, but mostly is willing to step back and let others take center stage.)

While there are some nice cinematic touches, like the use of multiple TV monitors within scenes, and the lack of a score—which showcases the incredible use of audio (or silence),
Bridges is more what you’d call “an actor’s director,” and The China Syndrome often uses those dull TV movie-style compositions that show off the acting.

Thankfully, this is one of Lemmon’s performances I like—I prefer when he plays somber, and tones downs the manic histrionics (which is why I really can’t stand the actor in most of his comedies, where that is his usual shtick).
His nuclear engineer is a guy whose work is his life, and he’s been involved with atomics since his days in the Navy. He’s got no wife or family—no pets even (at least never-at-home reporter Fonda has a pet turtle)—the reactor is the center of his universe, and it’s a betrayal worse than adultery when he finds that its safety reports have been tampered with.

This film would’ve been much more memorable in the hands of someone with a snappier sense of style, or a better feeling for paranoia and the sinister, like Robert Aldrich (who despite his macho reputation has had strong female leads in many of his films; and had released his own nuclear terrorism flick, Twilight’s Last Gleaming, two years earlier), Alan J. Pakula (again, strong female leads, notably Fonda in Klute; and director of the greatest conspiracy movie ever, The Parallax View) or Joseph Sargent, who had directed Bridges’ script for Colossus: The Forbin Project before helming the legendary thriller The Taking of Pelham One Two Three in 1974.

Of course, I think that any movie that deals with technology or machines should be directed by John Frankenheimer—what he could’ve done with The China Syndrome: wow! (Instead, he was working on Prophecy: wow…)

However, if you’re a fan of old school matte-painting special effects and the like, The China Syndrome is a joy: every exterior view of the nuclear power plant is a painting, as well as many interiors of the reactor or other big pieces of equipment (or else these effects were accomplished with the very old-school technique of hanging miniatures).

(Because Roger Corman and AIP used matte paintings so routinely for the exteriors of castles in their Poe flicks, when I now see films like The China Syndrome, where matte paintings are used extensively for exteriors, I have the Pavlovian reaction to think of Corman’s spook palaces—
which isn’t a bad analogy, I suppose: nuke facility [equals] haunted house. Makes sense.)

[Below are some of the special effects of the reactor, with a snap of late, great matte-painter Matthew Yuricich at work on the scenes. (Images “borrowed” from NZ Pete’s incredible and essential blog MatteShot – A Tribute to Golden Era Special FX)] 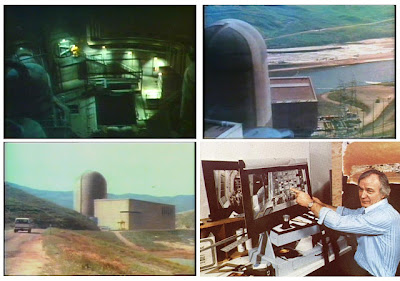 The DVD has a couple of good “making of” documentaries, but it’s too bad the extras didn’t include the old SNL spoof “The Pepsi Syndrome” just for kicks (I love Dan Ackroyd’s Jimmy Carter, glowing with a cheap video effect after stepping out of a reactor saying, “I’m a nuclear engineer, and I’m pretty worried right now!”). (But it is HERE, andstill funny—with a cameo by Rodney Dangerfield!)

SPOILER: While The China Syndrome has its “happy” ending where engineer Wilford Brimley tries to exonerate the dead Lemmon on live TV,
personally, though, I think the movie should have ended with that penultimate scene in the control room after Jack Lemmon’s been gunned downed by the SWAT team:
It starts when he’s on the floor, bleeding and dying, and he whispers, “It’s moving,” meaning the reactor is going critical again.
Then the scene becomes pandemonium and chaos, with the sirens clanging, the monitors freaking out, the engineers screaming, Fonda looking scared, then the building shaking and rumbling, everybody freaking out, some of the monitors start shorting out, others show static and color bars—
Of course, the surviving engineers solve the problem (for now), there’s no meltdown, and we have our toothless “happy” ending (that only the brain-damaged could believe would lead to justice being eventually served).

But I think what they should have done was, at the height of that chaos (I’m thinking specifically of the close-ups of the TV monitors freaking out)—
smash cut to black.
Leave the audience thinking that the reactor went ker-blooey, and Goodbye SoCal.

That would’ve been too freaky for the general population, I suppose—but y’know what? It’s how I keep thinking the movie ends anyway, and I have to remind myself that there’s this bogus “happy” ending there.
Oh well… 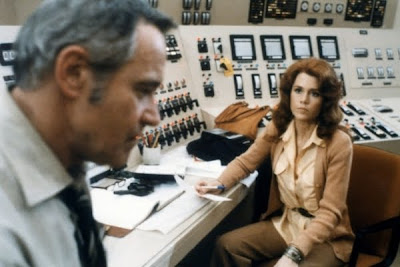