LIE #9: Back in the day, MAD magazine called it “Rollerbrawl”

[Sci-Fi Month at LERNER INTERNATIONAL continues, rolling into the future!] 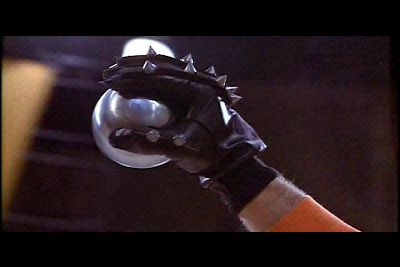 Rollerball (1975; Norman Jewison) is perhaps the reason the fast-forward button was invented.

The sequences on the Rollerball track are perfect, and beautiful to watch as sport and cinematography work together making kinetic art—an action movie lover’s dream. 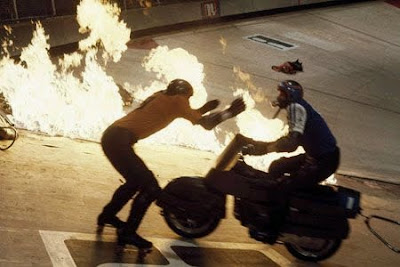 The three game sequences are classics of action cinema—and ought to be required viewing for all the shaky-cam acolytes who think they know what they’re doing. Second-unit director/stunt coordinator Max Kleven should be proud of his work.

It becomes of fusion of movement—who knows how much footage was shot, but it feels like a lot (Were the cameramen on roller-skates, too? It seems like it sometimes)—but edited beautifully by Anthony Gibbs: I always understood where the players were in their spacial combat.
You could argue that the circular nature of the track (or is it a rink?) aided in the prevention of confusion, but the empirical evidence of ineptly edited action sequences in dozens of other films proves me correct—and more so these days unfortunately.
Gibbs knows what he’s doing (he went on to edit many films including The Dogs of War and John Frankenheimer’s excellent actioner Ronin).

Recently watched again as part of my effort to catch up with all potential influences to The Hunger Games, Rollerball presents a corporate-controlled world where the bread & circuses this time is the titular brutal and exciting game, a combination of football, rugby, roller-derby, extreme fighting and motocross.

Maybe the financiers of Rollerball should have given Max Kleven the rest of the flick to direct as well, because when we are not in the arena, what we have is—well, not so much bad, as pretentious and so very serious. It tries so hard to “say something” that it forgets to tell a story.

Like Logan’s Run (1976) or Truffaut’s Fahrenheit 451 (1966), this film is an interesting failure about (cue Paul Frees-style movie trailer voice-over:) One Man’s Almost Kafka-esque Struggle Against the “Soft Totalitarianism” of his Future Dystopia.

Yeah, this flick thinks it’s important—
that just because it mentions these themes the audience will be impressed enough with the filmmakers’ audacity.
Director-producer Norman Jewison & Co. were incompetent enough to think that serious themes can only be presented in a staid, formal manner, with any sort of “fun” drained out of it. (And if they haven’t overthought it, then they haven’t given a crap, and have contempt for the audience.)

Rollerball unfortunately spends too much time on star player James Caan’s somnambulistic life, as he mopes about muttering over “what it all means,” and how the corporation has shafted him.
Much of the dialog in these sequences comes off like clumsily-translated lines from an Eastern European existential drama about a boring rich man’s midlife crisis.
I get the feeling that these filmmakers were too scared of this film being thought of an “only” a genre piece, and had to up the level of pretentiousness. (And trying to examine these scenes as if they’re dull and lifeless on purpose doesn’t work either—the movie just isn’t that smart.)

But the Jewison’s lack of familiarity (or faith) with the genre leads him to make the mistake of filling it with tons of clichés, with sections feeling like pages torn out of the Cliff Notes of Brave New World or any of the other dystopic visions I’ve mentioned.
Instead of presenting us with a world that is obvious superficial and shallow, the filmmakers have given us chunks of a movie that are superficial and shallow.
For example, all the women we meet in Rollerball are played by the then-supermodels of the day, like Maud Adams—at first we are given the impression that all women in this world (of a certain social standing, natch) would look like exquisite mannequins as part of some horrid, tyrannical peer pressure—but that theme is never followed up, and it just seems that they were cast because they were hot chicks and this is a Hollywood movie.

(Credited as sole screenwriter, William Harrison has disowned the film, saying that director Jewison threw out his script.)

Jewison has admitted that the production design was very influenced by A Clockwork Orange. But unlike that film’s very specific use of real world locations, Rollerball’s feels willy-nilly, buildings only used because they looked “futuristic” or “antiseptic,” with cameras obviously never moving beyond a certain point so we don't see downtown Munich.
Art direction in R-ball also fails due to schizophrenia: the scenes at the games are given many details, all looking accurate. Off the games, the design couldn’t be more unspecific, where nothing seems like it’s plugged in; one button can control a variety of different functions; and in something out of the anti-realist art department of Barbarella, a “liquid memory bank” is represented by bubbles in a fish tank.

Press materials always state that the film takes place in the year 2018, but I honestly have never heard the calendar mentioned in the film itself, so I think that specific year was just a number cooked up by United Artists—Rollerball’s original distributor—for promotional possibilities.
Thus thwarting Jewison’s attempts to make Rollerball not a “science fiction” film. [Insert Nelson Muntz-style “Ha-HAH!”]

The funny thing is that Death Race 2000 (1975; directed by Paul Bartel; produced by Roger Corman), made to cash in on the then-impending release of Rollerball, is much better remembered—probably because it’s a much better film, wisely understanding that a criticism of the dystopia of now via futuristic portrayal is much more effective when done with comedy and a touch of camp at a very fast pace. It’s especially surprising how, with so much less, Bartel/Corman manage to create a much more detailed and complete future fascist state than Rollerball’s creators did.

Part of the problem is that Rollerball never shows how much the game means to hoi polloi and the unwashed masses beyond non-descript shots of extras shrieking in the stands—
The audience knows that The Powers That Be say they need the game to control the masses (to see the futility of individual effort, in this case), but we never get to see the giant TV monitors in town squares, or factories stopping production to watch an important match.
Death Race 2000 actually manages a wider representation of socio-economic classes (the rebels, the girl who “sacrifices” herself, and the wife of the first “score,” for example)—and we see what The Transcontinental Road Race means to each of them.

The filmmakers of Rollerball really, heh, dropped the ball when they didn’t make the film as if it were a two-hour special on The Wide, Wide World of Sports focusing on Caan’s character, Jonathan E.
It could have been like an extended version of one of the “news break” segments from either Verhoeven’s Robocop or Starship Troopers, and they could have featured game highlights, statistics, player interviews and gossip—with much, much more arena footage—
but throughout it, there should be dark hints to Jonathan’s growing dissatisfaction.

Last time I checked, 1975’s Rollerball could be watched HERE—check out the action scenes at least!
(It’s too bad Last Exit to Nowhere discontinued its line of Houston #6 T-shirts, though.) 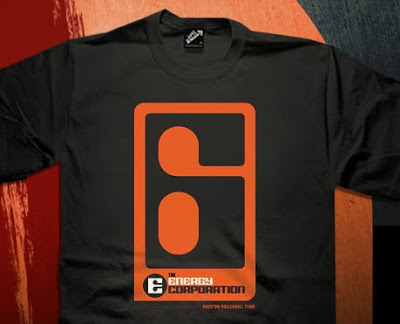 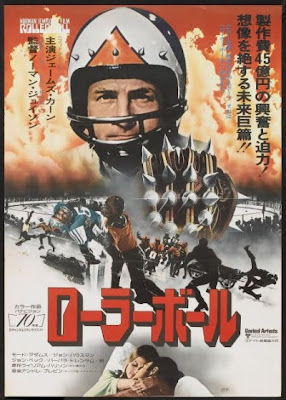 Email ThisBlogThis!Share to TwitterShare to FacebookShare to Pinterest
Labels: GO METS, James Caan, movies, Norman Jewison, Rollerball, sci-fi, The Mets pitched their first no-hitter EVER in their history yesterday and I was at Citi Field to see it in person