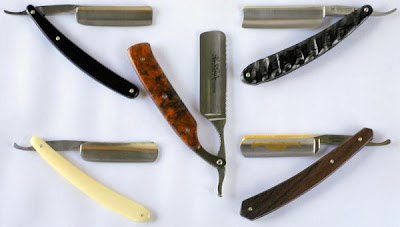 It was a blast participating in the “The Best Films Hitchcock Never Made” blogathon, and a specific reason I like getting involved with these things is to discover new films, or get my memory jogged about others—one film the b-thon turned me onto is now a new fave: the excellent Abandon Ship—and much of July was spent hunting down films that were either directed or influenced by, if not contemporaries to the Master of Suspense.
Read more »
Posted by Ivan at 12:04 PM No comments:

Email ThisBlogThis!Share to TwitterShare to FacebookShare to Pinterest
Labels: Alfred Hitchcock, Hitchcock, Peeping Tom, The Collector, The Phantom Lady, The Trouble With Harry, This Gun For Hire 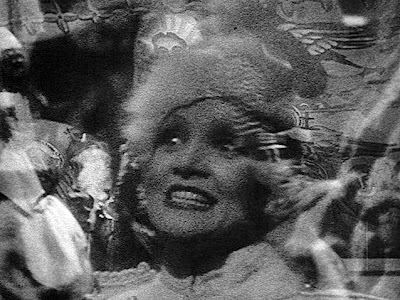 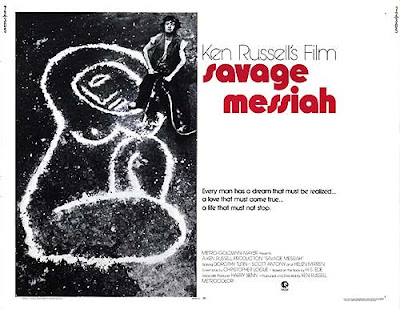 Savage Messiah (1972; Ken Russell) is probably infamous director Ken Russell’s most personal film, one into which he invested roughly $1m of his own money out of passion for the project as well as to maintain maximum creative control, using the biopic—despite (or enhanced by)
“necessary exaggeration of the facts”—as the delivery system for his artistic manifesto.

Russell has created an intense and vibrant, but sometimes necessarily off-putting film, exploring volcanic creative talent, warts and all. 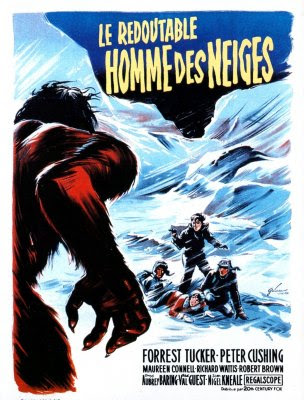 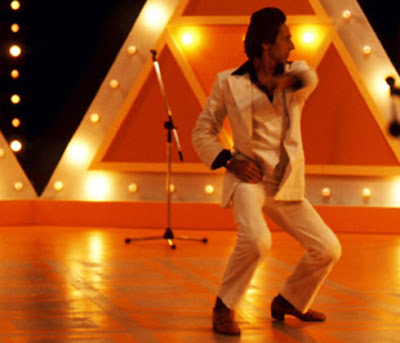 Tony Manero (2008; Pablo Larrain) is not fun. It is probably the bleakest and most “feel-bad” film I have seen in a long time, with a main character that’s such a rotten, soulless bastard that the movie is often very uncomfortable to watch: he’s such a beast, that you’ll feel dirty afterwards.
Set in 1978, had director Larrain shot this in 16mm and then blown it up to 35mm, you would have that exact same sleazy-grimy grainy-film texture you get from movies from that period, like The Last House on the Left and I Spit On Your Grave.

Most of all, though, Tony Manero is like a Chilean version of Lodge Kerrigan’s creepy Clean, Shaven—and I mean that in the best way: Both films are unrelenting and grim character studies of disturbed and violent loners; nor do they give obvious reasons as to why the protagonists are such bleak examples of humankind. (While very different, Tony Manero also reminded me very much of Nicolas Winding Refn’s Bronson: each movie being absolutely focused on its complete and unredeemable psychopath.)

While Raul, Tony Manero’s Tony Manero wannabe, is a mystery in his details, the source of his aberrant behavior is ever-present: the film says, this is what happens in the aftermath of a right-wing, anti-intellectual, anti-everything military junta taking over in a coup d’état.

Email ThisBlogThis!Share to TwitterShare to FacebookShare to Pinterest
Labels: Pablo Larrain, Saturday Night Fever, Will what happened in Chile happen in the US? Tony Manero

INDEX: Three More Potential “Outer Limits” Episodes; and the Other Films of the First Half of July 2012 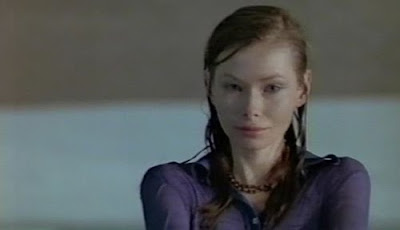 As I have mentioned before (in my post about They Live being the “best episode of Outer Limits never made”), there are decent, original flicks that are some variation on the sci-fi and horror genres

that sometimes beg, no—scream out for the cutting room treatment, where, had they been trimmed to the average length of a one-hour TV show (48 to 52 minutes, depending on commercials), they would be perfect.

In the first half of July, LERNER INTERNATIONAL watched twelve movies*, several of which fall into the category of “Potential Outer Limits Episodes;” let’s take a look: 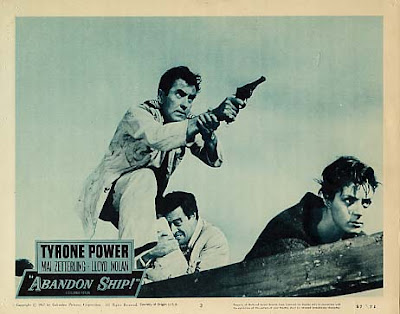 Abandon Ship (1957; Richard Sale) is a grim and monumental tale of survival, specifically of Tough Choices in Bad Seas—and is another new favorite, and a front-runner in the sweepstakes for “Best Old Film Discovered This Year.” 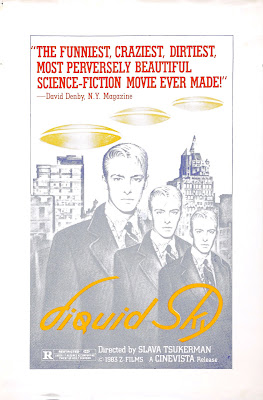 Liquid Sky (1982; Slava Tsukerman) is about aliens, both human and extraterrestrial—and is pure unadulterated 200-proof Cinema of Weirdness: a practically autobiographical No Wave/sci-fi murder mystery/comedy of manners.

This is no Flash Gordon-style space battle sci-fi, oh no: it’s much, much more: a sui generis rara avis all the way, baby… 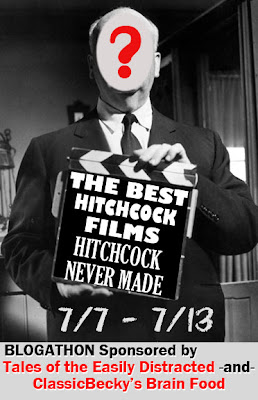 [This post is part of “The Best Hitchcock Films Hitchcock Never Made,” co-sponsored by Tales of the Easily Distracted and ClassicBecky’s Brain Food, both excellent sites and highly recommended: they offer perspectives refreshing to my sometimes cynical eyes.
Meanwhile
If you’re in search of massive amounts of imagery from and related to Jaws, and much, much more, feel free to visit the image bank at The United Provinces of Ivanlandia.] 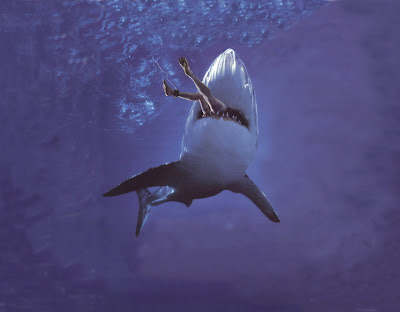 “[T]he killer shark in Jaws can signify anything from repressed sexuality to unbridled capitalism and the threat of a Third World to America… The way out of this deadlock is not via deciding which of the multiple meanings is ‘true’… what one should do is rather to conceive the monster as a kind of fantasy screen where this very multiplicity of meanings can appear and fight for hegemony.”

—From Enjoy Your Symptom! Jacques Lacan in and Out by Slavoj Zizek 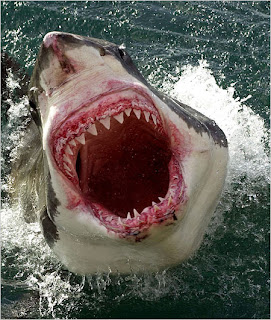 Jaws has that satanic ability to never be boring no matter how often I’ve seen it.
It’s as perfect as the shark it describes and chases; Jaws is almost as good as 1974’s The Taking of Pelham One-Two-Three—
I freely admit it, I love 1975’s Jaws—heck, I’ve loved it since I first saw it that summer at the Kings Plaza Twin!—I was there first, man!

So rather than rehash old ground about a classic flick that everybody has seen and loves—
I’m postulating
“What if Alfred Hitchcock directed Jaws?”

This comes about because Steven Spielberg has been name-checking Hitchcock as an influence on the direction of Jaws since the very beginning—
but Alfred Hitchcock was still alive and working even as he was being turned into “history.”

What if Hitch got the gig instead of Steve?
How would the film be different? How would it be similar? What surprises does The Master of Suspense have up his sleeves? What patterns can we trace, what guesses can we make?
Let’s start speculating!

Email ThisBlogThis!Share to TwitterShare to FacebookShare to Pinterest
Labels: Alfred Hitchcock, Jaws 1975, movies, Steven Spielberg, The Al Whitlock clouds in the sky almost have a HP Lovecraft vibe to them 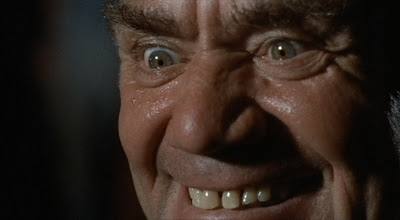 He will live in our hearts forever!
Posted by Ivan at 10:27 AM No comments:

LIE #25: In Brief: “Hollywood Boulevard,” Where Dante, Arkush and Davison Got Started 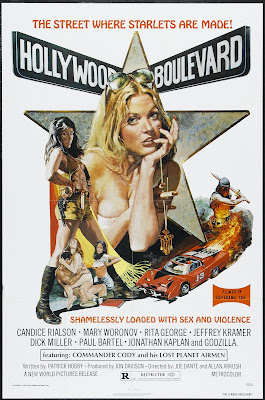 Hollywood Boulevard (1976; Joe Dante & Allan Arkush) is at best a curio—conceived as a bet between New World honcho Roger Corman and producer Jon Davison (who later produced Airplane, Robocop and Starship Troopers), that Davison and then-New World trailer editors Dante and Arkush couldn’t put together a flick in 10 days, using short ends and footage swiped from a dozen other New World action flicks.

LIE #24: Free Your Mind and Your Analyst Will Follow: a review of Cronenberg’s “A Dangerous Method” 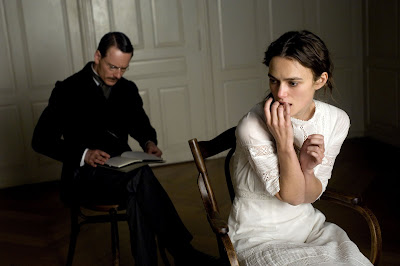 A Dangerous Method (2011; David Cronenberg) is another superlative film from this most singular of directors, one that tackles subjects familiar to the filmmaker’s fans (mad doctors; body-horror; the mind-body split; the body in rebellion; the pain in our heads that never goes away; sexuality and repression; misdirected creativity; and so on), but presented in a thoughtful and precise manner showing Cronenberg’s maturation as an artist and human being. 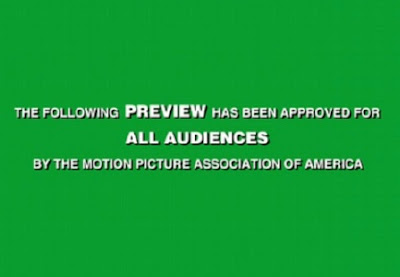 Perhaps more for me than you, here’s the index of films screened by LERNER INTERNATIONAL in June.
Movies listed in order that they were seen….

Email ThisBlogThis!Share to TwitterShare to FacebookShare to Pinterest
Labels: the movies of June 2012 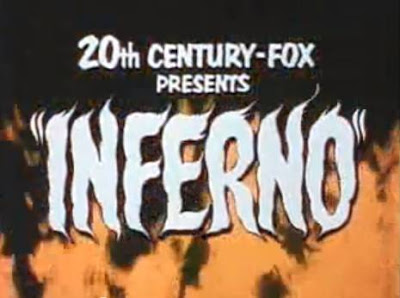 Inferno (1953; Roy Ward Baker) is the type of movie that would have been created by Albert Camus and Fred Nietzsche on a Friday night tequila bender: an incredible, existential neo-noir “man against nature fight for survival” that’s grounded by yet another tour de force performance by legendary actor Robert Ryan.

It’s a taut thriller that continuously ups the ante, with a unique structure, and nary a wasted moment.
Originally released in 3-D, and rarely screened since then (I didn’t know the film even existed until a few years ago), Inferno is a new fave of mine, and another “Great Older Film Discovery” for this year.