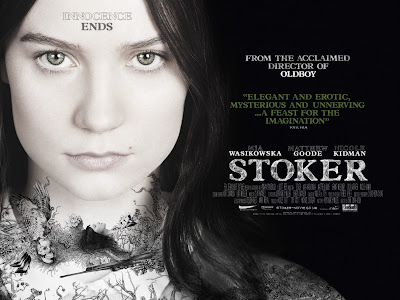 In a nutshell, Park Chan-wook’s first English-language film, Stoker, is right now at the top of my list for Best Movie of 2013.
This is the type of film that feels like it was made only for me, with complete disregard for what “popular taste” demands.
What can I say? I LOVED it!


Stoker (2013; Park Chan-wook) is a subtle, arty and oh-so-very suspenseful hybrid film that can be labeled “psychological thriller” for those who need capsule descriptions like that—but it’s much, much more intelligent than garbage like Fatal Attraction or Basic Instinct. 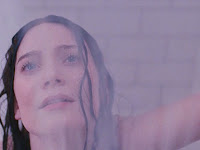 The excellent Mia Wasikowska plays India Stoker, a brilliant and moody, somewhat withdrawn teen with the most incredible hearing. She can pick up whispered conversations from far away, and the film reflects this with a complex and multilayered sound design that could almost drive a person insane (hint).
Her beloved father has died in a mysterious car crash on the day of her 18th birthday, and then urbane and aloof Uncle Charlie shows up at the funeral, insinuating himself into the family. The longer Charlie sticks around the more disturbing he becomes—never creepy or sleazy, but definitely unnerving.

India’s mom, Nicole Kidman, is a shallow twerp, and director Chan-wook uses Kidman’s plastic features to good effect (whatever happened to that natural fox from Dead Calm?) as the vapid widow unquestioningly allows the Uncle total access to the family.

Stoker defies simple summation: part mystery, part coming-of-age tale, part experimental art film—with an often sick sense of humor that’s quite transgressive in its own way.
The film has a style overload, but without being obnoxious: it is very formalistic and restrained—but there’s something seething under the surface, and if anything, the exquisite and beautiful cinematography increases the tension (aided by the already-mentioned audio landscape). 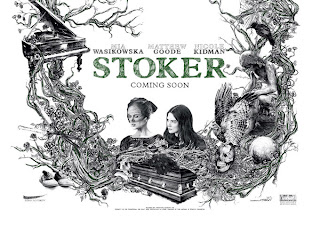 The best way to describe the movie’s plot without giving away anything? If Alejandro Jodorowsky was to remake Hitchcock’s incredible Shadow of a Doubt (tied with Psycho as my favorite of the Old Master’s films, and the one most like a David Lynch movie, meaning the weirdness is piled upon weirdness; if you’re familiar with that film, Stoker’s “Uncle Charlie” should be recognized as a tribute).
Honesty, Stoker would be a perfect double-feature with Jodorowsky’s Santa Sangre (severe blood-splattered parent-child dynamics).

The title evokes vampirism (Irish author Bram Stoker wrote Dracula), but those expecting fangs, neck bites or (worse) sparkly teens will be disappointed. (Not that I expect the knucklehead brigade to even recognize the name of Count Dracula’s creator, anyway…)

Some snarky critics call Wasikowska the current “It” girl, but this status is totally deserved praise: She has such poise, acting chops and genuine beauty that you know she will have a long and varied career ahead of her. There’s nothing apparently artificial about her, and the character of India has an unearthly, ethereal quality coupled with a deep maturity, if not sorrow.

Stoker is a film I will see again and again, I swear—it’s that good. Director Park Chan-wook (who gave us 2003’s infamous Oldboy, among other pieces of cinematic intensity) has made a successful transition to English-language/Hollywood filmmaking, and I cannot wait to see his next feature.

ALSO SCREENED RECENTLY:
Doomsday Book (2012; Kim Ji-woon and Yim Pil-sung) Interesting Korean sci-fi anthology that’s worth catching on Nflix Insta (where I caught it), but a tad too obtuse (language barrier? The background signs and various newspaper headlines not being translated?) for anyone beyond a dedicated fan of SF or Korean cinema:
It’s as thought-provoking—and shallow—as a Twilight Zone episode.
Also disappointing: although listed as a “star,” beautiful actress Doona Bae has only a cameo.

30 for 30: Straight Outta L.A. (2010; Ice Cube) I don’t like football, but I grew up loving Al Davis’ Raiders, and then we both hit Los Angeles around the same time, cementing adolescent violence fantasies in my mind, especially with psychos like The Tooz or Brooklyn’s own Lyle Alzado on the team.

That said, rapper Ice Cube’s documentary (originally for ESPN) is both personal and sociopolitical, looking at the City of Angels and its tangled, tortured history of racism, government-enforced segregation and police brutality, as well as how urban kids dealt with it.
The Raiders’ arrival in Los Angeles was a blast of hope for many youngsters, points out Cube (who appears and narrates), effectively showing how the city (and all its legends), hip-hop and football influenced each other.

It didn’t hurt that their first year in their new “hometown,” the Los Angeles Raiders won the Superbowl (whew, Marcus Allen’s spectacular run is still impressive).
Yep, a “Commitment to Excellence” was a massive influence on rap group NWA, and Straight Outta L.A. is a true fan’s film, with Cube’s interview of the infamous Raiders owner Al Davis having to be seen to be believed: I think Davis is the only person Cube has ever been in awe of.
This documentary deserves to be on the shelf with Los Angeles Plays Itself and Bastards of the Party.
Los Angeles Raiders, RIP: 1982-1994.
(Meanwhile, I hope Cube keeps making documentaries; he shows a flair and style that many of the other ESPN docs seem to lack.)

Porcile (Pigpen, or Pigsty) (1969; Pier Paolo Pasolini) I just don’t think I will ever like any of Pasolini’s films: this, Salo and Teorama all put me to sleep, sometimes literally.
Maybe it’s the slope of my forehead, but I cannot see why Pasolini is given such praise. However, the boys at Soiled Sinema recommend Porcile, and their review is HERE.