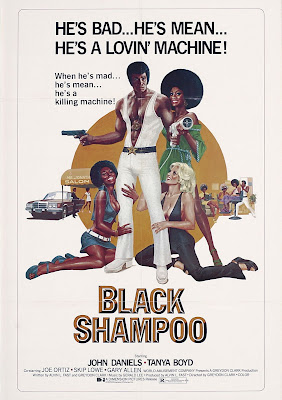 Enlivened by beyond over-the-top performances and excessive (but thematically integral) nudity, 1976’s Black Shampoo is blasexploitation at its height: Mr. Jonathon knows how to satisfy his customers!

(And later, we’ll be taking a look at the New School in Exploitation, reviewing The Purge!) 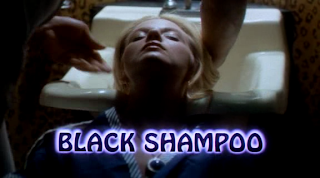 Essentially a Russ Meyer flick that takes itself seriously, Black Shampoo is a cross between one of RM’s 1960s B&W morality tales, and one of the candy-colored 1970s romps. So you get the dangers of drug trafficking mixed with nude BBQs; violence is given a musical score better suited for the carnival; a goofy detour with the nympho swimming-pool sisters and disconcerting overdubbings; and any and all opportunities to show all-natural 1970s-era female flesh. So retro, it’s refreshing!

There’s total camp value in this flick, as well, with hair styles and clothing that’s now almost like something out of a sci-fi movie. Lead John Daniels (who did all his own stunts) struts his stuff well, and the flick is enlivened by location shooting around Los Angeles (without permits, of course) by young Dean Cundey, a couple of years before he began his long collaboration with John Carpenter.

Meanwhile, Brenda, the new receptionist at Mr. Jonathan’s hair salon, seems to be the only woman who has melted his Casanova’s stone heart. Their happiness is threatened by Brenda’s past as a Mafia mistress, though, and her old boyfriend wants her back.

Then, what started as a raunchy blaxploitation rip-off of Warren Beatty’s “Death of the Sixties” opus, takes a nasty turn, and ends with pack of mean-spirited goons and a motherfuckin’ chainsaw fight!

During the flick’s meaner segments, anything gets used as a weapon: cars, pool cues—and in a scene both ludicrously over-the-top and quite horrifying, a sympathetic gay hairdresser is sexually abused with a curling iron.

If you can enjoy this flick on a deeper, more philosophical level, good for you—otherwise Mr. Jonathon’s follicle and fornication follies will keep you happy with its parade of disrobing women—various Me Generation hotties of unique shapes and sizes—some low-budget thrills; and a super-soul soundtrack that’ll flip your wig. 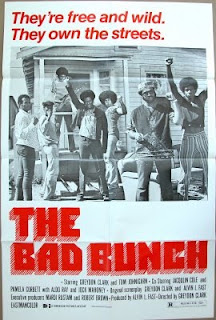 A few years earlier, director Greydon Clark explored race relations in the U.S. with 1973’s highly recommended The Bad Bunch, a bleak and grim flick whose bitter message and utter social realism (fantastic location photography around Los Angeles stolen without permits) made it box-office poison. In that film, the director plays Jim, a vet of the ’Nam, back at home having a hard time trying to assimilate back into “society.” He gets a nasty lesson in racial inequality/insanity when he goes to Watts to deliver a letter from his dead buddy to the man’s father. But the dead man’s brother, who has chosen the non-slave name Makimba, refuses to allow Jim on the property, and blames the hapless vet for all of the White Man’s Evil. A pair of racist cops right out of a James Ellroy novel keep turning up to stir up trouble, and Makimba keeps fingering Jim for everything wrong that happens, vowing to make him pay…

With the much less socially conscious Black Shampoo, Clark eschews all politics: Playing up the legend of the Black Stud to the hilt while being weirdly post-racial in its depictions of social interactions, the movie spends half of its time being spicy and silly. Then the other half is menacing and serious—creating an overall schizoid vibe that keeps things jumping, even during moments of relative calm. 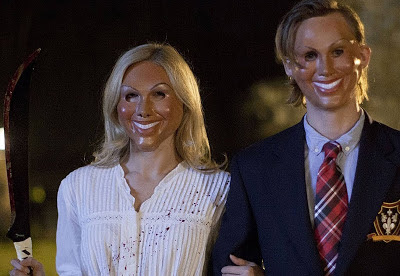 YES! This is what a B-movie is supposed to be! Radical political ideas wrapped in a blood-splattered exploitation movie.
In an alternate reality/near-future where it seems McCain/Palin won the 2008 election and Ayn Randian sociopathic tendencies run riot, control and economic growth is maintained via the annual “Purge,” where all laws are suspended for 12 hours, even murder. 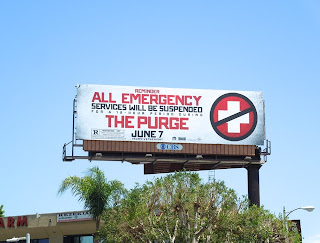 But from the get-go we’re informed that this isn’t equal-opportunity wholesale slaughter—those with “level 10” government clearance are exempt from Purging, and if you have enough money, you buy a top-of-the-line home security system.

But it’s a method that works, argues dad/security-salesman Ethan Hawke to his family on the eve of The Purge, and they wouldn’t have such a swell house if it wasn’t for this government-approved psychosis.

After the klaxons announce the start of the madness—no police, medical services or fire departments will be available—the night begins to reverberate with the sound of gunfire.

Soon a wounded black man—he might be homeless, he might be a vet—is running through the gated community, pleading for help, screaming and begging to rows of cookie-cutter mini-mansions, all with their steel shutters rolled down. (Due to budgetary limitations, we don’t get to see much of how The Purge impacts urban areas, but maybe that’s for the sequel…)

Hawke’s young son is moved by the bloody stranger’s plight and deactivates the home defenses and lets the man, who’s never given a name, in.
Subplots regarding the rest of the family all swarm together, and it’s all exacerbated by the arrival of some obsequious prepsters wearing verrrrry creepy masks. Their smug spokesman is the Preppie From Hell, and tells Hawke that if the wounded man isn’t turned over to him, the masks will break in and kill everyone inside.

The Preppie knows what Hawke’s been keeping secret: the security systems he sells aren’t infallible—and more than one chicken is coming home to roost tonight…

What we get is a very good mash-up of Funny Games meets The Hunger Games meets Straw Dogs meets The Wicker Man (there’s a very pagan vibe to The Purge with its talk of blood sacrifices and ritual killings), with a dash of Death Race 2000 thrown into the mix. The film knows how to build tension, and there is much for the gorehound to enjoy. Meanwhile, with this and the excellent Sinister, Ethan Hawke has reborn his career as a genre B-movie lead.

But best of all, is this flicks’s twisted political message, going straight into Jonathan Swift/Richard Matheson territory, pointing out where unlimited greed and vilifying of the powerless will take us, expertly bolted-on to a gory home invasion scenario, that makes The Purge work.