“Real Men Eat Whatever They Goddamn Want!”: Making Salmon & Mozzarella & Asparagus Quiche (and Eating It, Too!)


In 1982, humorist Bruce Feirstein published Real Men Don’t Eat Quiche—Reagan-era, populist anti-intellectual humor.
Even as a kid, I thought, “To heck with you; real men eat whatever they goddamn want!”

And I was a kid who ate cereal for dinner, and hamburgers for breakfast.
So there.


My palate for food was hardly sophisticated when I was a kid. Sometimes I think I might have gained more social skills had I been raised by wolves…
But be that as it may, it took growing as a person, and traveling and meeting new people to help expand my taste buds.
Heck, I didn’t even know about sushi until I started going to college in Southern California!
College was a great place to expand cultural horizons—especially gastronomical ones—even when it happened inadvertently, and perhaps begrudgingly.
I used to LOATHE asparagus. Wouldn’t touch it. My mom loved the stuff and was all, “Fine, more for me!”

So, I used to make a big show of avoiding asparagus—lots of those dopey “asparagus pee” jokes, and so on. Laughs galore.
But finances made me change my tune (don’t they always?)—
It was circa 1985-1986, a lonely Spring Break on campus for the students too financially strapped to take a giggle-fest trek to Cancun, or Ibiza, or San Francisco….

Those of us who were left, and who had banded together, had chipped in $$$ equally for some food purchases, but when future-superstar-photographer Michael Larsen returned from the market, he had also returned with a bundle of the dreaded asparagus.
I feigned outrage: “I didn’t pay for this, I won’t eat this,” I proclaimed, not really thinking it through.
“Fine, more for me,” Larsen chortled, echoing Mother Dearest, and definitely thinking it through.
Fine.
I paid for it, I’ll eat it, I thought, grabbing a plate.
And it was great! I’ve loved asparagus since then.

Smoked salmon has been a staple of my existence since the start (Hey! I grew up in Brooklyn! Bagels and lox, bubbeleh!)—
But despite making yummy quiches for me and my family and friends for more than a decade, it had never occurred to me to make one with salmon. The Missus just mentioned it in passing, almost an afterthought…. “How about a quiche with salmon?”
YES! 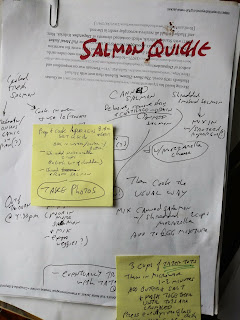 Brainstorms—and research (and I lost the URL for one site that was particularly helpful; my apologies); my R&D M.O. for recipes is to take copious notes, and then cross-reference them, cover with Post-Its, and make it my own! 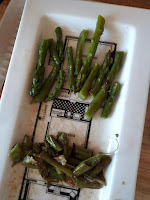 Prep and cook Asparagus [6 to 10 spears/simmer in shallow pan (start with thick pieces first), when water is almost simmered away, add butter and a couple of crushed garlic, pinch or so of salt, a few leaves of fresh basil if available, sauté.]

Keep spears for decorating/chop up rest, then set aside—

We’re not doing anything fancy with the pie crust; Foodtown had Pillsbury’s, so Pillsbury’s it was. 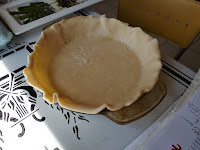 The shell should be thawed before unrolling, but not thawed to the point of drooping excessively. Be gentle unrolling the pie crust, and have some white flour sprinkled in the pie tin. (It’s a glass-Pyrex pan at our house.)

Usually quiches go heavy on the cheddar, but this one is different:
Using the same principle that salmon goes well with cream cheese, this recipe calls for mozzarella cheese, about 2 cups.

I did also shred some mild cheddar cheese maybe 1/3rd or 1/4th cup, but that I was going to save until the end, as almost a garnish. 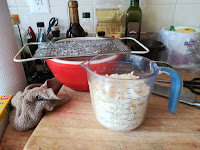 My mozzarella was from both Aldi’s and Foodtown. (I’m not sure where I stand on this: Would paying more for some “top dollar” mozzarella cheese really be worth it? Any subtlety of flavor might get lost in the intensity of the smoked salmon’s pungent deliciousness, or any remaining tartness from the asparagus. I tend to lean toward using the cheese as a backbone, or a foundation to build upon, rather than a primary flavor delivery system. But I acknowledge that the cheese cannot be overpowering, like a cheddar, so Aldi’s/Foodtown mozz, it is.) 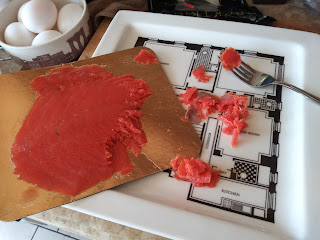 I shredded the beautiful red salmon as best I could (two forks in opposite directions seemed to be effective).

First, we lightly coated the uncooked pie crust with some chunks of salmon. 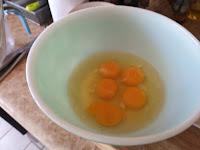 Five eggs (I always break my eggs in a separate cup, like a coffee cup, before adding them to the other eggs in the bowl. What if one eggs is bad? I’ve had weird eggs come out of their shells, so I don’t want to take chances!) 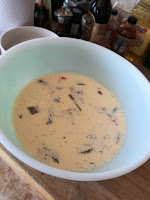 Add about 1/4th of the salmon left to the egg mixture, stir in well

With a fork, stir in the 2 cups of shredded mozzarella cheese into the egg mixture 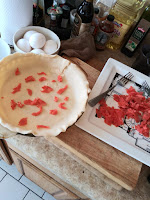 Then with a fork, poke the floating salmon to different levels in the quiche.

Lightly mix in with a fork, the little bit of cheddar cheese on the top (it’s a garnish to add a bit of bite)

Finally, place the broccoli spears into the magic sigil of your choice!

Then into the oven! I checked at about 40 minutes, poking a couple of toothpicks into the quiche, but I felt it was still too liquid-like, so I put it back in the over for another 7-8 minutes. Individual oven temperatures and cooking times may vary. 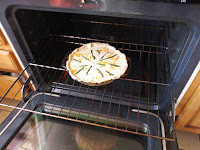 So I eyeballed it. Looks good!
Let it cool for a while—these things are hot! 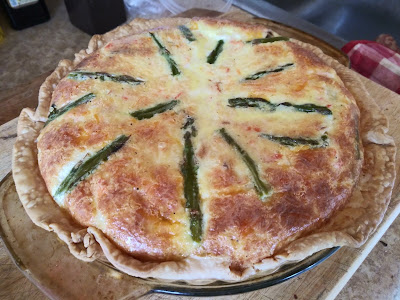 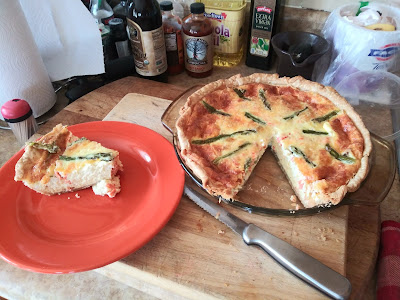 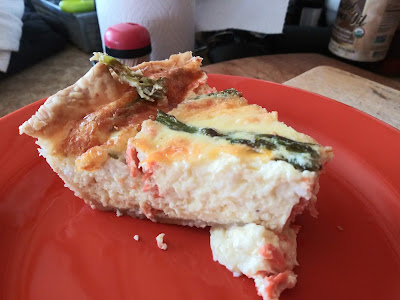 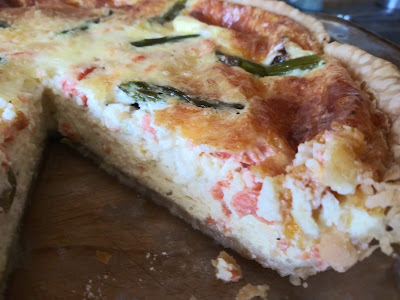 Then, that evening, I made another quiche—but this time the pie crust was created home-made, from mashed potatoes! Oh, YEAH! 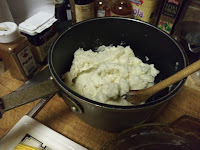 Mash the potatoes (lots of butter! And cream!) but not too runny…
Coat the pan with olive oil
Preheat oven to 350 degrees F—
Smoosh in the mashed potatoes into the pie crust. Try and keep it even!
Once pie pan is coated in mashed taters, then coated with olive oil.
Bake for 30~35 minutes, or until golden brown-ish…. I turned the heat off, and left the mash-potato pie crust in the oven for another 7-8 minutes….

Took it out, cooled it. Then filled it with your standard sliced-ham-red-pepper-and-cheddar-cheese quiche egg mixture, thrown on some fresh basil if you have it, and bake it again—350 degrees Fahrenheit for about 40~45 minutes.
Once again, DELICIOUS. 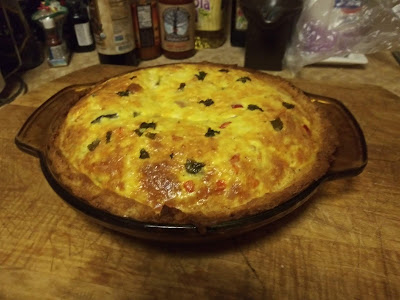 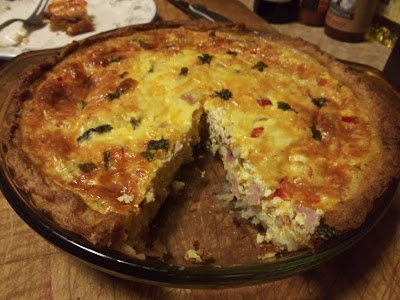 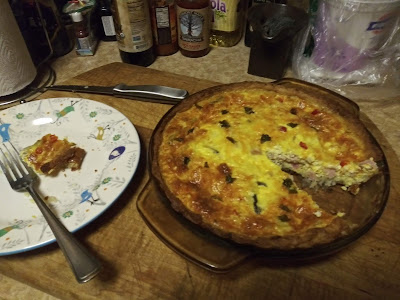 Next Time I Try This: We’re gonna go for some Tater-Totz Pie Crust!