It was 43 years ago today—on the afternoon of Saturday, May 28, 1977—that I saw the movie that changed everything.
Really, everything: I even believe that the film was partially responsible for getting Reagan elected… (but that’s an unsubstantiated theory for another day). 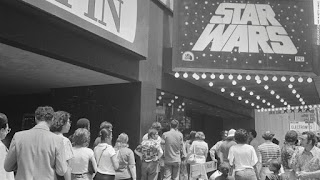 It had opened in NYC earlier that week—on Wednesday, May 25—at only a handful of theaters, none in Brooklyn, I recall (or else we would have seen it there).
We had arrived at the Loew’s Astor Plaza (now gone, sort of), right off Times Square, at 11:30am, but they were only selling tix for 4pm. Shrug, we got no choice.
Holy moly! There was a line that stretched around the block, all the way around the four corners and back again! The theater across the street showing The Car was deserted. Tumbleweeds.

In Loew’s, the excitement was palpable. The theater was a’buzzin’! We’d scored decent seats in the smoking section (and there were already slight whiffs of something other than tobacco already in the air), and the lights went down. No trailers, just the extended 20th Century Fox fanfare (a sign of quality!), those clean graphics in that groovy blue font in silence (build the tension), WHAM—


the combined-blast-of-music/pullback of the title—followed by more of that rousing music: Yeah, take a moment to savor that score! Meanwhile, here comes the crawl, an info-dump that thankfully isn’t of mammoth proportions, but aping the opening crawls of the old Buster Crabbe space opera serials of the 1930s. Dig it, this modern flick is showing respect by acknowledging its roots! (Although I’d already seen it, I’d forgotten George Lucas’ 1971 debut feature, THX-1138, began with some B&W 16mm footage from an old Buck Rogers serial.)

The crawl fades off into the galactic distance, the music settles down—so no credits at the beginning then? Okay. A slight tinkling begins, glassy, sweet, and lovely. We pan down past some exquisitely-composed and photographed beautiful matte paintings of planets hanging in space—
The music suddenly drones into an ominous, portentous theme—ZOOM! Blam! Was that a spaceship? Annnnnnd….. what the hell is that? Does it end? This is brilliant…. Oh. My. God.
Never stop!

And with that, I was HOOKED.
Here's the first seven minutes--watch it and love again. 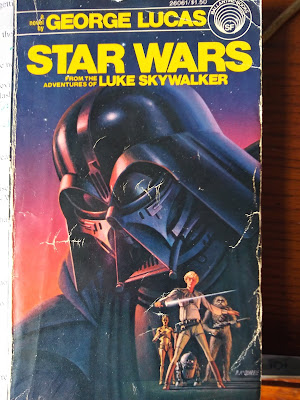 Saw Star Wars 10 times that summer, then three more times in the theater, before The Empire Strikes Back was released in 1980. But I wasn’t as hooked after that. I liked Empire, but not as much. Not having an ending didn’t help. I was a moody adolescent by then and demanded “closure.”

But 11-year-old me had been aware of SW77 before mid-May, when the TV ads began (I remember seeing my first Star Wars TV ad on Saturday Night Live).
I had picked up the George Lucas novel (ghosted by Alan Dean Foster, who made a bundle I heard!)—published in December 1976—I remember little of the book, probably won’t be attempting a re-read for quite some time… Glad I still have it, though.
Starlog magazine had some pix, but never ones that really grabbed.
But if the paperback and the smattering of photos in the press were the fuse, the bomb was the trailer.
I could swear I had seen the original Malachi Throne-voiced trailer before a screening of Ralph Bakshi’s beloved Wizards. That was in March or April of 1977.
Although slow by contemporary standards, this trailer was RIFE with what this kid needed and craved. I could barely wait.

Yes, no matter from what segment of the overall Star Wars franchise, eyeball kicks are guaranteed.

But since Empire, I just… lost interest. Saw the movies—mostly; I’m not sure if I’ve ever watched Revenge of the Sith all the way through, from beginning to end… Loathed Rogue One, but really enjoyed The Last Jedi… Still haven’t seen Solo, or any of the recent animated Clone Wars TV shows…

Interestingly enough, 2020 started with some new Star Wars material:
Couldn’t be bothered to muster the minimum of disdain for The Rise of Skywalker—
So noisy! So…movement! Uhhhh…. So, what happened?
Wow, I really wanted to like this flick, but it was so…. blah…. [Link to Great Wisecrack video about Rise of Skywalker HERE.]

On the other hand, I’m a big fan of The Mandalorian: Season One (2019; 8 episodes; created by Jon Favreau) Spaghetti-western Shogun Assassin in Space! Werner Herzog cameo! Totally awesome Clint Eastwood-Sergio Leone vibe!!! Love this! It’s well-written, it takes its time, it develops its characters. At the same time, it adapts and mutates—and improves—a universe I thought I had grown weary of…. Looking forward to Season Two! (And Darth Gus Fring? I’m in bad-guy heaven!)

Because of Star Wars, 1977 is deffo The Year That Nerd Broke, but the movie itself becoming the, heh, force that it did was no fait accompli—and the film is not really sui generis.
Star Wars was created out of the swirl of the now-almost-forgotten Nostalgia Boom—
and being the best stoner flick ever!
Last one first: Other flicks were obviously “trippier,” but that could also work against a happy stoner vibe—2001 or Yellow Submarine were overwhelming, the eyeball kicks of Star Wars were familiar, but weird; normal, but tweaked intergalactically. Goofball sci-fi was stuff with which the viewer was comfortable. And zoom-zoom, bang-bang! Eyeball kicks, man.

Lucas has called the shooting style he uses in the SW universe as an almost documentary style, hardly any close-ups, a certain type of lighting—I’m not sure I agree with him, but whatever he calls it, the SW movies tend to have a  distinct style, if not now established at least by the shared costumes, background critters and tech. The universe is lived-in, treated familiarly, but not as weird as the sets from Barbarella.

The 1977 movie, which I will not call “A New Hope”—I’ll concede to calling it “Star Wars ’77” to prevent confusion—was part of the Nostalgia Boom at the time, flicks like Paper Moon, The Sting, even Lucas’ previous American Graffiti.

Star Wars got so big, it tsumani’ed the Nostalgia Boom right down the toilet.

But back in the day, before he latched on to Joseph Campbell and slid to snoozeville on greased rails, Lucas would either cite the 1930s/1940s serials of Buck Rogers, or Flash Gordon (which in one interview, he said he had tried buying the rights to). There’s the connection to the Nostalgia Boom, it was bound to happen….

Throw in Kurosawa; Jack Kirby comics (Dr. Doom and Darth Vader, anyone?); James Bond-esque villain technology, including all the effects knowledge gained from those movies (remember that SW77’s physical effects supervisor was John Stears, who’d worked on the Bonds from the beginning), as well as 2001, Silent Running, Gerry Anderson TV shows, and countless others; a lived-in universe, the antithesis of the antiseptic starships of Star Trek; insane amounts of Frank Herbert’s novel Dune; and then as a capper,  take all of that, and re-edit/recreate it using The Bridges at Toko-Ri/The Dam Busters/30 Seconds Over Tokyo (take your pick, but the video on Dam Busters really pegs Lucas & Co.) as the template for the final battle.

(And let’s not forget: What were producer Gary Kurtz’s contributions? And ghost-screenwriters Gloria Katz and Willard Hyuck? And then how did the film editors (notably ex-Mrs. Lucas, Marcia) refashion an okay movie into a great one? [Great video about the editing of Star Wars HERE])

It might be a formula, but for the time, DANG: A weird formula, absolutely!
But one that I latched onto completely.
Because of a healthy diet of TV, comics and weirdness, I was quite the young mutant, and the nerd in me recognized much of what was being referenced, but it was all also used so originally and creatively that everything old was new again. BLISS.