Tsundoku No More (or: “Reading Is Fun For Mentals!”)

This is all about having too many books in your collection…. 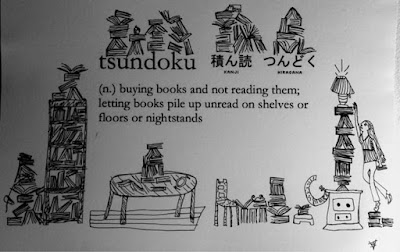 In high school, Mr. Hayden, our intense, fascinating, essentially humorless, mean, and sometimes vindictive English teacher (and D-Day veteran), was really into drilling us with what he called “Spot Quotes.”
It was a rote memorization technique (probably frowned on now by progressive pedagogical types—I’ll save my gripes about the modern education system for some other time…), but the famous and essential quotes from English-language literature were hammered into our heads. Yeah, yeah, yeah, lots of dead white guys, but it was the early-1980s. I think Mr. Hayden was right: You want to sound smart? Drop a famous (or infamous) quote from classic literature—

“…full of sound and fury/Signifying nothing….”
“I am his Highness’s dog at Kew/Pray tell me, Sir, whose dog are you?”
“To a green thought in a green shade….”
“Tyger, Tyger, burning bright…”
“Look upon my works ye mighty, and despair!”
“I’ll burn my books!”

Wait—huh? What was that last one? “I’ll burn my books!”? How can that be a famous quote? Is it from a revised Fahrenheit 451, where Montag recants, and rejoins the Fire Department? And what does it have to do with me owning too many books?

“I’LL BURN MY BOOKS!”
That’s the last line spoken by the main character in Dr. Faustus by Christopher Marlowe (who, Mr. Hayden informed us, was killed by being “stabbed in the forehead!”). Faustus is being dragged to Hell by The Devil, and makes a final attempt to be freed by offering to destroy all that he’s been going about collecting (what he sold his soul for): his knowledge.
It’s like the rich man who’s sold his soul for gold telling Satan, “I’ll be a pauper if you don’t take me!” Well, of course, Mephistopheles will hear nothing of it. Lucifer’s deals are unbreakable, and besides, why should the Prince of Darkness believe or care about you? 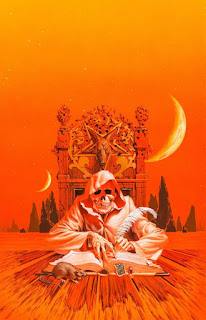 But giving up something that was (at least at one point in time) valuable to you can be a noble thing—if done for reasons that aren’t remotely satanic.

And Marlowe’s quote is in my head lately because I’ve been trying to give up something valuable to me: My books.
I used to be a prime bibliomaniac.
I used to be tsundoku.

Have you ever been in a house or apartment that has too many books? One of my neighbors in my apartment building has books EVERYWHERE.  All the walls are covered. Extra shelves were put in, so it looks like books are holding up the ceiling. It was overwhelming, suffocating. Especially because I wanted to ignore the cocktail party (boring conversation anyway), and CLIMB THE WALLS to look at all the books (and try to steal any I didn’t have and coveted). Completely distracted, I couldn’t wait to get out of there, it was driving me nuts.

Take a look at the “Denver” scenes from Kubrick’s The Shining. The apartment that the Torrances have in the Mile-High City is overflowing with books. Books can be a perfect place to hide; trust me, I know: That was the apartment I grew up in—full of books. Books can be a buffer between people, you can use books to insulate yourself against others, while claiming to be learning about the world (when really you might be hiding from some aspects of it).

I admit it: I love that “old book smell.”
I love haunting a used bookstore and checking every nook and cranny for some treasure. It’s something I’ve been doing since a child.
And once the New Plague has A) either gone away; B) been cured; or, C) killed 99% of the population (except me, please!), I will find a used bookstore and spend a lot of time snooping around. I’ll probably leave with five or six books, and a couple of them I will most likely never read. (Honestly, thinking about my compulsion makes me a little queasy.)

Some have written about the “value of owning more books than you could read,” but that sounds stupid. It sounds greedy and selfish.

I do not want to be tsundoku! Some of my friends would revel in that appellation if applied to them, and if it makes them happy, that’s awesome.
Being tsundoku when you’re younger is an expression of joy—“I’m gonna read all these fuckin’ books one day!
Yeeee-HA!”

But when older, being tsundoku seems… I’m not sure—desperate? Like you’ve made a deal with Satan—“I can’t die until I’ve read all the books I own, okay?” [Which, if you’ve studied the ways of Satan and his contracts, you know never quite works out the way you want it to—well, most times.]

If my book-collecting friends have the money, space, and yearning to develop a personal library to equal Andrew Carnegie’s, more power to them. Me? I’ve only got so much space. Meanwhile, The Missus has really influenced my sense of style: Clutter is not cool.

Now, some of my personal spaces do get cluttered, but that tends to be “work-related.” Clutter is oppressive, and stifling. It’s not a question of the amount of stuff, but how it is displayed. Less is more. The Pile Theory is a big loser here. Stacks? Sucks.

Nowadays, for me, I must PURGE. If that book’s been on my shelf for more than 10 years, and I haven’t cracked it? It’s a goner. (Although that’s not always true: Gravity’s Rainbow and William Gaddis’ JR keep turning up on my shelf. One day, I promise, one day….)

Reference books are exceptions, though: There are plenty I would like to ditch, but can’t because they are/have been/may become necessary to my employment.

I used to be very much the “tsundoku”—someone who would buy books and not read them, just let them pile up. I was very smug and satisfied with myself until some astute person, whose name I cannot remember now—this was said to me nearly thirty years ago—such a different time! (Gosh, I miss the 1990s….)
Anyway—I was showing off my collection, and this person offhandedly said, “I think it was Oscar Wilde who said, ‘Some people think that owning books is having read them.’”

That quote—from Wilde or not (and I’ve searched)—really struck me. I felt I was being an intellectual faker (like Gatsby and his unread library). Even 30 years ago, I knew I had too many books; there wasn’t enough room, and it looked ugly—like I was a hoarder. Tsundoku, or collector scum?

I still love books, and reading, and learning—about 50% of what I read is non-fiction (although that is not be represented by my shelves; because the majority of my non-fiction reading tends to be of a timely nature, and I don’t like keeping around non-fiction books that have become outdated, it is from the most-exalted NYPL, so I  don’t have to keep it around cluttering my shelves).

I’ve had about three major book purges in my life so far—but usually associated with Big Life Changes (moving, going crazy, being broke…), so these days of the New Plague will consist of Book Purge Four… I’m at home all the time now, and staring at those overflowing shelves made me feel… I dunno, maybe dirty is the best way to explain how I felt.

I still have too many books, but I like what I have, and I have no intention of getting rid of most of them. In some cases, I am collector scum (I’ve got signed editions, first editions, rare paperbacks, out-of-print books, et cetera…). But these are all books that are either loved, needed or wanted. Most of them, I want to reread (I tend to reread my faves…)

Luckily, my apartment building has a sort of “lending library” in the basement, next to the laundry room. The tenants can leave any books they don’t need, or take any that catch their fancy. I’ve actually picked up, read (or started to read and put down), and returned several books to the basement lending library. And when I leave a book, and then it disappears, I always wonder which of my neighbors took it? For example, who took my copy of Russell Banks’ The Darling (good, but no Rule of the Bone), or Forever and a Death by Donald Westlake? (I’m a huge fan of Westlake’s writing, but this one was one of his most minor efforts, and not worth keeping around—and I already have a very large collection of his better books. Hey, I guess I’m not collector scum, after all! Whew!)

BTW, I also have TOO MANY T-shirts—don’t have to buy another for fifty years, it looks like—but that’s a post for another day…. 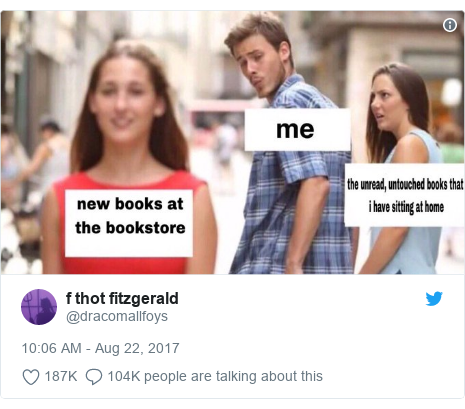 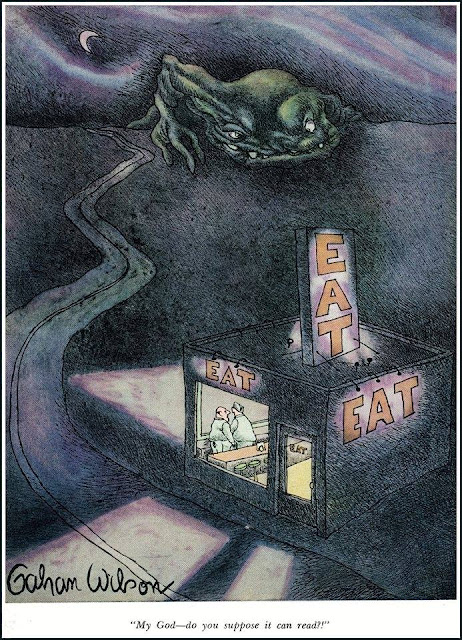