Okay, so the Steve Ditko-illustration of happy guy in the easy chair meeting an alien? I’m featuring that illo because he’s reading!
The book in the man’s lap may not be a mass-market paperback,
but you could interpret the space creature as a symbolic representation
of the Spirit of Science Fiction Itself, coming to “take the Earthman away….”

MORE Summer Reading Recommendations! With the PERSONAL seal of approval! Yep, I vouch for these books!
Summer’s Here! 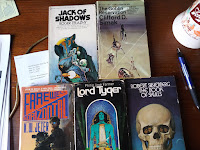 Some summertime SF reading recommendations—
Five Five-Star Should-Be-If-They’re-Not-Already CLASSICS. (And that should be pronounced “KEY-Lass-IX!”)

In Order of Recommendation:
The Book of Skulls (1972) by Robert Silverberg
Farewell, Horizontal (1989) by K.W. Jeter
The Goblin Reservation (1968) by Clifford D. Simak
Jack of Shadows (1971) by Roger Zelazny
Lord Tyger (1970) by Philip Jose Farmer


Yessiree! Five strange bits of SF weirdness—that are not unapproachable!
SF should make you THINK—push your brain, but entertain—tweak expectations! Deliver the unexpected! These books do that! 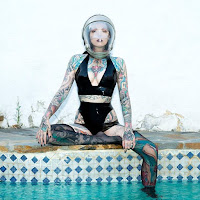 But they also fall under the umbrella of Awesome Summertime Reading that’s action-packed!
These five sci-fi books are deffo page-turners! And yes, they are WEIRD (which makes them awesome! Squeee!).
And I’ll promote these books because no one else is!

With the exception of 1989’s Farewell Horizontal (which is itself a sort of sui generis, anyway: cyber-steam-punk? Super-science fantasy? It feels more like Barbarella than Blade Runner, honestly), today’s books are, if not part of, then of the time of the New Wave in SF (that is, circa 1964-1974).
Not sure what that means other than a labelling of the types of SF that I like—much of which dovetails into what is considered the style, content, and attitude of New Wave SF; it’s what I’ve always enjoyed. Today’s five mix science, mythology, and horror/suspense into a super-science mélange where the line between technology and magic disappears. These books all show phenomenal world-building, as well, sometimes with only a bit of dialogue.
In a sense, the ghost of Arthur C. Clarke’s comment, “Any sufficiently advanced technology is indistinguishable from magic,” hovers over these books.

In Jack of Shadows and The Goblin Reservation, science and magic at least tenuously co-exist, and

Farewell Horizontal zooms right into the super-science so fast, it might as well be a magic realm—a world that’s a giant building with all of society’s outcasts living on the outside riding motorcycles with “snake”-tires to stay attached to the exterior, high above the clouds, parallel to the ground! Like a tale of goblins and elves living on the outside walls of a castle…

Lord Tyger and The Book of Skulls are ostensibly set in contemporary times, but deal with mythologies—whether creating or participating in them—and examine these myths through sociological-anthropological lenses, albeit via an Edgar Rice Burroughs-inspired adventure, and a horror tale, respectively. These two are really the best, but also the most potentially controversial, dealing with genuine social issues of the NOW, rather than metaphorical problems that might be standing in for something else. 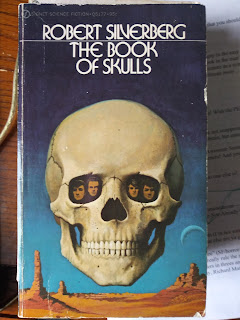 The Book of Skulls (1972) by Robert Silverberg—probably the most “horror” of this list (although Signet, its publisher lists it as “science fiction” (not quite a lie; there’s much talk of anthropology, philology, mythology and comparative religions))— Ghoulish thrills equal to anything of Stephen King’s (honestly!). Of these five books, The Book of Skulls is probably the one that’s nearest to the “mainstream.”

Four young men discover that a monastery in the American desert holds the secret of immortality, and they road trip to it.
But they all also know that only two of the four can achieve the eternal, and that of the two that are ordained to die, one must be by suicide, and the other has to be killed by the remaining students—and it can’t be a suicide or an accident.
The characters go through a LOT of introspection, but it’s all like a puzzle: which one’s secrets will destroy them? Although often melodramatic, the introspective flashbacks tend to ring true, as well—making “sense.” And as a mystery of who will die and who will survive, The Book of Skulls keeps you guessing, not so much through “surprises” or “shock cuts,” but by ping-ponging the sympathies and attachments the reader has made with the characters (which Silverberg deftly defines through variations of internal monologues and incident). It’s good. 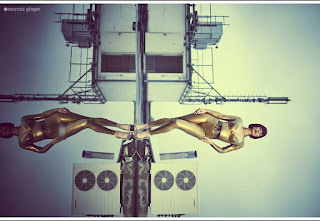 Farewell, Horizontal (1989) by K.W. Jeter—I always had the feeling this was supposed to be the start of a trilogy, or a potential series…. Our protagonist is Ny, a freelance video-hoodlum trying to make his big score. But he’s double-crossed, and has to run for his life—on the outside of a miles-high, impossibly-huge building. Steampunk-ish nanobot tech keeps people “upright,” but it does start to mess with the reader’s mind as you start conceiving everything sideways.
Possibly the weirdest of this group of recommendations—a relentlessly-paced sideways-world Mad Max on the outside of a building; why this building is even there is never explained—are there other buildings? Never mentioned— 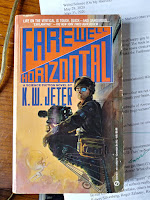 I’ve read this book twice before; I need to read it again; hopefully my opinion won’t have changed much since the last time…. But I liked Farewell Horizontal’s lack of an info-dump, the lack of background exposition; the book’s breathless demanding that you accept its world on its terms! And the novel is ACTION-packed!!!

(If you’re interested in the sci-fi sub-genre of “Impossibly Large Buildings,” I recommend the excellent The World Inside, written by the already-mentioned Robert Silverberg. Dealing more with government-sanctioned overpopulation through constant sex than the engineering dynamics of a huge frickin’ building, this is still an impressive read, and wildly thought-provoking.) 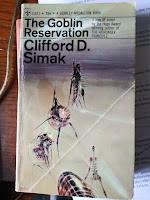 The Goblin Reservation (1968) by Clifford D. Simak—a wild combo of Lovecraft and Zelazny, or something that you might expect coming from the fetidly fertile mind of Mike Mignola. I’d kill to see Mignola illustrate this! It blows my mind to think that this book was a giant early influence on Kim Stanley Robinson.
In The Goblin Reservation, Science has shown that the supernatural exists! Trolls, goblins, ghosts exist, and time travel is commonplace. This book is often freewheeling, not goofy or self-consciously “whimsical,” but breathlessly adventuring from one point to the next. ZOOM! It’s an exhilarating,fast-paced page-turner. Pete Maxwell is an expert in the supernatural, and when he returns to Earth, via teleportation, he finds out that “he” returned two weeks ago, was murdered and buried before Pete Maxwell got back. 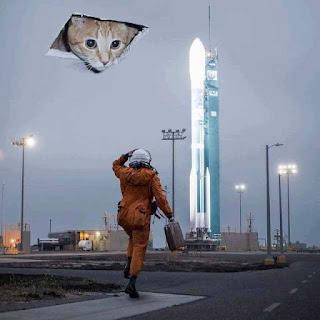 Racing against the clock, eventually Peter and his friends (including a Neanderthal who “escaped” from the past) discover that ours is the second universe—after the Old Ones’ original universe ended 50 billion years ago. And there are creatures who have already killed “Peter Maxwell” once to keep him silent….

Any regular reader of any of my blogs—in other words, my friends—knows that I’m a HUGE fan of Damnation Alley, the book, written by Roger Zelazny. NOT the movie—ugh!
Jack of Shadows (1971), also by Zelazny—is probably the most “fantasy” of this list, but a grim and dark tale, as well, of a thief done wrong who goes about getting his revenge, and if the whole world must be forced to change, so be it. Having no soul, the eponymous Jack is a heaping helping of existentialism, becoming worse than the monsters he’s been fighting. 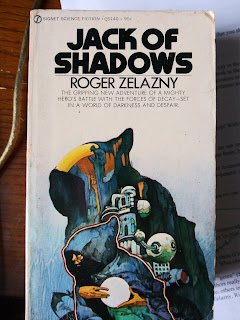 The Earth has stopped rotating; the night-side (the Occult and the Supernatural; protected from the cold by giant magic mirrors) against the day-side (Science-based, and sheltered by heat-reduction technology), but Jack was born in twilight, can survive in both, and has a magical intimacy with shadows: He can disappear into them and travel along them; if his name is spoken in shadow, he can hear it; and so on. But the reverse is true, bright light reduces his powers, and at one point, he is imprisoned inside an eternally-lit mirror-crystal.
Zelazny doesn’t stop and world-build, he world-builds as he moves along, giving just enough information to whet our appetite. The landscapes, the beliefs, the culture that we meet, we are given just enough to flesh it out for the action-adventure we are reading, not for the establishment of some broader literary realm.

One nice thing about Jack of Shadows is that there is NO sense of there being a sequel (RZ’s written a couple of prequels, but kept to his word about no sequels for JoS). While you get the dreadful feeling that “This Is Not Going To End Well,” Zelazny keeps you glued to the book as he leads his protagonist to a self-defined doom. GREAT READ. 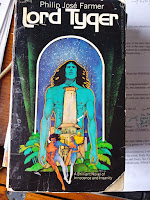 Lord Tyger (1970) by Philip Jose Farmer—a modern-day Tarzan ponders his existence, while trying to solve the mystery of his birth.
Ras Tyger lives like Tarzan in the hidden valley—but that hidden valley is part of a reclusive billionaire’s exclusive private park, recreating the Tarzan adventures he’d read as a child—and ruining dozens of lives in the process.

As detailed and somewhat forlorn as, for example, Peter Matthiessen’s At Play in the Fields of the Lord (1965; excellent!), or some of Joseph Conrad’s work (and just as deep, really, concerning the “clash of cultures”), Lord Tyger deffo makes you work for your entertainment, but it’s worth it. As with Jack of Shadows, in Lord Tyger, after a certain point, you get that feeling of “This Is Not Going To End Well.”
Perhaps melancholic, but a groovy, intense read at the beach, as well! 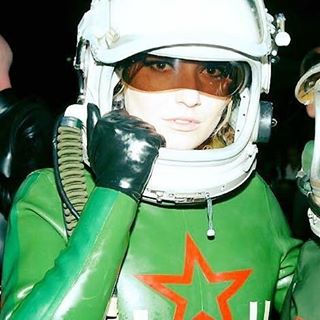 In Praise of Mass-Market Paperbacks!

So, I don’t know of you noticed, but the recommendations of today’s post were ALL mass-market paperbacks….
I LOVE mass-market paperbacks; I love their size, how they feel in the hand, that they can fit into a back pocket, a cargo pocket, the side pocket of an army field coat, the inside pocket of certain types of denim jackets… Immensely portable! That’s the sign of a reader, someone who demands ease of transportation with their reading materials! 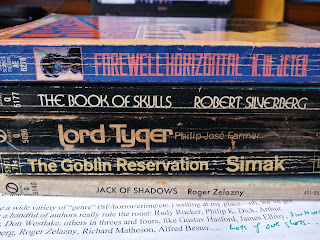 Trade paperbacks don’t always fit. And there’s a snooty “modern lit” vibe that trade paperbacks often carry with them. It’s not like I don’t have a lot of those sized books on my shelf—but usually, what choice do I have? After a certain point in time—the 1990s? Blame the Clintons! —it was considered declassee if you were published in only mass-market size, like airport or pharmacy spinner-rack books. Read ’em & toss ’em. Even Stephen King gets published in both size of paperbacks after his initial hardcover run. 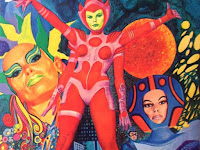 There’s more than likely a nostalgia vibe that goes with my preferring old school mass-market paperbacks with my SF—it’s all of a certain era of art direction and typography that I grew up with—and is now essentially long-gone in today’s publishing world.

So, I thought I would combine my love of these MMPs and some offbeat science fiction recommendations SINCE IT IS SUMMERTIME!
Oh, happy day!
Posted by Ivan at 2:45 PM