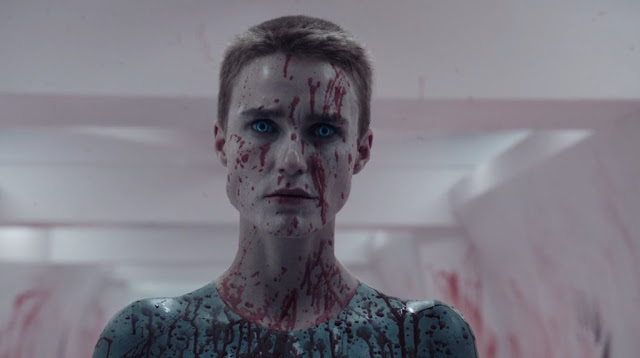 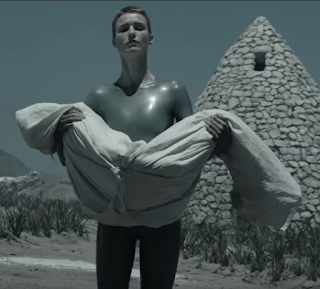 Honestly, Raised by Wolves starts with a fascinating concept: a pair of androids, Mother and Father (their costuming the most unsexy use of latex catsuits ever), are sent to a far-off planet with a dozen embryos, with some tech to “grow” and raise them. There seems to have been a war on Earth between atheists and the Mithraics, and our home planet has been destroyed. (What the Mithraics are about, and why there was a war in the first place are just some of the questions the show frustratingly refuses to answer.)

Father is a basic humanoid android, but Mother has additional incredible powers: she changes into a golden, but meaner version of herself and flies (in a crucifix position), as well as having a vocal-sonic “beam” which pulverizes living tissue into gory, ropey chunks of pulp. 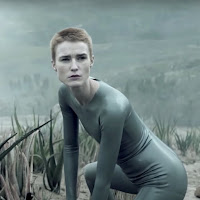 They raise the children as good atheists, but after 12 years, M&F have only managed to keep one child alive. Then the Mithraics’ space ark shows up…

Mother manages to crash the space ark, grabbing a handful of Mithraic (and thus, very religious) children, and tries to start “anew.”

But there are survivors of the space ark crash, all of the children are unhappy (I kinda loved that Campion, the primary atheist child, was such a shrill and abrasive little shit at first—he’s the ultimate spoiled child; having robot gods as caretakes will do that to you, I guess), and the planet may not be as uninhabited as it seemed… 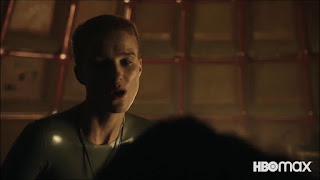 Growing up, I heard two variations using the expression “raised by wolves”: The first was “Those kids are so wild, it looks like they were raised by wolves;” and the second was, “He would have been better off raised by wolves.” The second expression is my primary thought when I hear the phrase “raised by wolves,” and it’s also what I think the title of the show means. Some commentors have noted that Romulus and Remus, the alleged founders of Rome, were raised and suckled by a female wolf, and that this has something as yet unexplained to do with the show. But I don’t see it.

But there were many elements from the New Wave (as well as cyberpunk) in the show: the deep questioning of religion and our place in the universe, and if there is a god; the advanced technology that’s almost magic; non-linear storytelling; the androids are often more empathetic than the humans; apocalyptian dystopias; illegal, secret street surgery; ancient, perhaps dead civilizations in deep space; semi-mystical children; artificial intelligence; and more. Like New Wave science fiction, I felt the show was often sexist despite its claims otherwise (crying wolf?), especially in the plot moves taken against Mother, denying her agency, and sometimes giving her questionable motivations.

That said, I had been really invested in this show, but by around episode 6, I started to get a bad feeling: More loose threads were being created than being tied up. More characters, themes, and plots were being introduced than were being resolved.

Now we have extended narratives in practically all shows and the lines between TV show and miniseries have blurred. Even sitcoms, like Parks and Recreation or The Good Place, have extended story arcs. [I have also noticed that most miniseries, if not all of them, tend to have two or three “filler” episodes that add little overall except some fun bits, or backstory. Raised by Wolves is guilty of this, but so are some of the best shows, like The Mandalorian or Better Call Saul.]

Since a TV show’s producers need to keep a “buzz” going, of course there will always be cliffhangers and the like, but a good show knows to close at least some narratives at the end of the season—Breaking Bad did this excellently, as does The Boys.

Since we are specifically reviewing an “HBO miniseries that feels like a New Wave science fiction book from the late-1960s/early-1970s,” let’s look at another to see how it can be done right: Season One of Westworld, also known as Westworld—Season One: The Maze (2016; ten episodes; created by Jonathan Nolan and Lisa Joy, based on the 1973 screenplay and film by Michael Crichton). 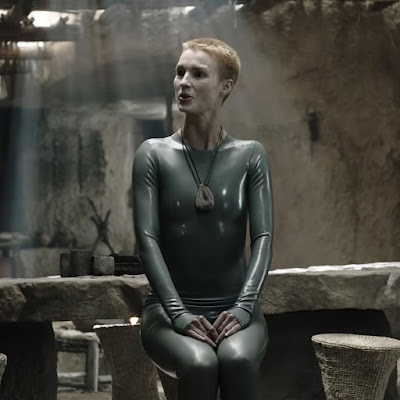 I haven’t seen Seasons Two and Three of Westworld (although “Samurai World” does sound cool), and I’m honestly not sure I want to: I think Season One is a perfect, contained whole. I’m very satisfied with it, especially after my second viewing. Sure, there are a few somewhat nagging loose threads (what happens when Maeve goes back for her “daughter”? What about the security guy and the Ghost Nation Indians?), but those become almost unimportant as the massive saga of Dolores and her expanding A.I. consciousness, with the time-jumping side story of the Man in Black/William, comes to a glorious close as the robots revolt (which neatly ties the show into the central events of the original 1973 movie [which I saw twice in the theater back in the day!]). 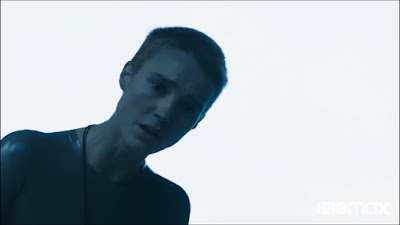 Westworld Season One is, like its fellow HBO show Watchmen, better appreciated the second time around. And like the unfortunately-cancelled Watchmen, Season One feels like a novel—dense, complex non-linear plot structures that demand viewers pay as much attention as a reader might with a complicated book—but also something with a definite end. Not everything has to be answered (if you’re planning a sequel), but the novel itself should be a unified whole. Frank Herbert’s 1965 tome Dune might have had countless sequels, but each one was a book on its own. (Unlike the two sequels to The Hunger Games, which would have been better off published as just one big book, IMHO.)

In summation, and it hurts me to say this because there’s a lot of good about this show (and I went to college with its producer—happy belated birthday, Jon!), and the performances, writing, and production values are all top-notch, but WHY SO MANY CLIFFHANGERS?!?

I can’t afford the emotional and mental investment a confounding show like Raised by Wolves demands when I have the deep suspicion that these questions will never be satisfactorily answered. One season is enough.