NO LEGS to Stand On: Saturday, June 1st, at midnight, You MUST see “Mr. No Legs”! (read more below) 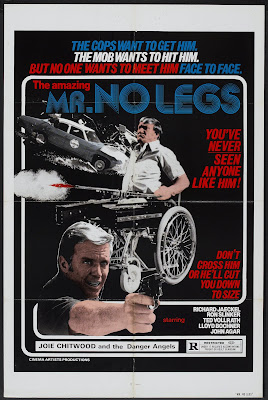 If you are anywhere on the Eastern Seaboard on Saturday, you must make your way to Brooklyn’s Spectacle Theater to catch a super-rare, midnight-only screening of lost exploitation freakshow Mr. No Legs (also known as The Amazing Mr. No Legs—which is my preferred title).

Directed by Ricou Browning, this 1979 sleazeploitation anti-classic is set in the ugliest Tampa imaginable, and follows two grotesquely self-righteous police detectives (one with the obligatory porn-stache) tracking dope dealers and corrupt fellow cops, while trying to stay out of the clutches of unstoppable mob enforcer, Mr. No Legs, a martial arts master with many a violent trick hidden up his sleeves—and wheelchair. 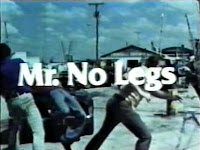 Shotguns, switchblades, ninja stars and his fists are No Legs’ weapons, and if he’s outnumbered, there’s always a convenient swimming pool around to pull an assailant into where this hitman doesn’t need his legs to kill you.

Like the poster says, “Don’t cross him or he’ll cut you down to size!” 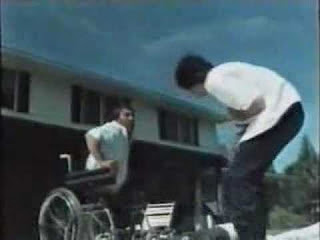 As I’ve mentioned before, Mr. No Legs makes Ray Dennis Steckler seem like a goddamn David Lean! Ripping off Peckinpah and Hong Kong equally, along the way some of the sleaziest, nastiest cross-sections of low-life trash get put on the screen: racists start a rumble in a bar involving midgets and drag queens, junkies get loaded, prostitutes get into broken bottle fights, and everyone double-crosses everyone else. It culminates with a disturbing car chase/demolition derby that gives the impression that innocent bystanders are getting slaughtered.

My fave bits? Everything involving the black dwarf in the bar; and the fact that at one point a dope peddler turns over the "stuff" to a customer before getting the cash—even The Missus was shocked: “Do these people know anything about selling drugs?!?” she yelled at the TV.

Featuring a cast of shameless B- and C-listers, including Richard Jaeckel, Lloyd Bochner, John Agar, Rance (Ron’s dad!) Howard, and real-life double amputee Ted Vollrath as the snarling No Legs. 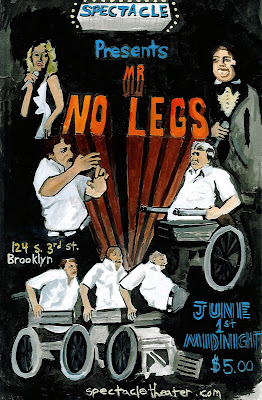 According to Badass Cinema connoisseur Vern, Vollrath wasn’t in any other movies. “He was a good find, though, because he really does seem like a tough, ornery bastard who wouldn’t let the loss of his legs keep him down. I mean, look at the guy on that poster, he looks like he would bite your nose off if it came to it.” (I wouldn’t be surprised if Vollrath—which sounds like “roll wrath,” am I right?—went on to play Murderball; heck, he probably invented the game.)

It’s a convoluted, ultraviolent, tasteless, trashy B-movie actioner that was directed by the Creature from the Black Lagoon! That’s right, director Ricou Browning was the former Olympian who found fame in Hollywood playing the Gill Man for Universal Studios, and later supervised the underwater sequences on the TV show Flipper.

Perhaps shamed by the awful treatment of dolphins in captivity, Browning made Mr. No Legs to punish the human race—by showing its worst side. With no redeeming qualities to enrich the soul or bring out the best in mankind, Mr. No Legs is the finest sort of exploitation cinema. Therefore, a MUST-SEE! 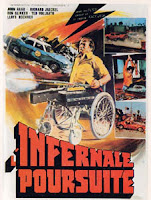 It may be unredeemable trash, but Mr. No Legs is the first film I’ve programmed/curated for the fabulous Spectacle Theater in Brooklyn, and boy, am I proud!

Because I wasn’t a regular attendee of the movies of 42nd Street, I don’t feel much loss regarding the transformation of “The Deuce.” You see, when you lived in Brooklyn (back in the day, before the borough became the nexus of everything hip), you never needed to go into Manhattan (it’s not “The City;” that word refers to all five boroughs, dude) for your exploitation movie needs.

There were enough trashy, feet-sticking-to-the-floor, watch-out-for-rats grindhouses for all your sleazoid needs—gore, kung fu, Filipino craziness, AIP second run flicks, blaxploitation, New World rip-offs and so on—that it was not necessary to go into the “Isle of Manhattoes” for your low-brow desires. (In fact, when I was a kid, Manhattan was primarily the place to go for first-run flicks and art movies.)

Now, the movie theaters in Brooklyn all seem to be multiplexes showing nothing but the latest comic-book/true-love-conquers-all/ultraviolent macho man fantasies from the Hollywood Propaganda Machine—
Except the Spectacle, where a little bit of old-school Brooklyn moviegoing returns on Saturday, June 1, at midnight—be there to catch Mr. No Legs!
Tickets are only $5—you’ve got no excuse to miss this! Here's the trailer to entice you even more!

[I’ve got more—definitely better—films scheduled for the future at the Spectacle, and if you read LERNER INTERNATIONAL regularly, you will be informed! THANK YOU!] 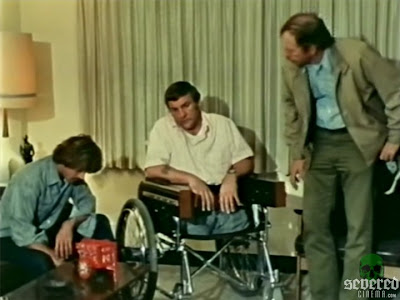