LIE #85: This Evening, Scream along with God (or, Jesus Freaks vs. Bible Thumpers; Who Will Survive and What Will Be Left of Them?) 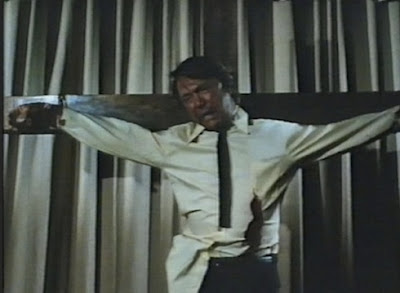 Can your soul stand the theological implications of 1971’s The Night God Screamed?
You get old-school 42nd Street madness with this lost exploitation flick about the dangers of uncanny Bible-quoting hippies and the generation gap.
Deliciously nasty 1970s trash, and a great midnight movie! 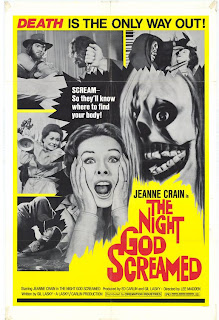 If you hate religion, goodness gracious, do we have a flick for you! Not quite a “gem,” but certainly an object of intense fascination: The Night God Screamed is an almost forgotten, “ripped from the headlines” grindhouse flick that has gotten better with age as its subtextual philosophical questions have gotten more prescient over the years.

Neither the Manson-esque followers of psycho-prophet Billy Joe Harlan (a perfect Michael Sugich) nor the “Squares” who spend their last dime on religious trinkets instead of necessities, are spared: foolish Reverend Pierce has used this month’s mortgage payment on a giant wooden cross; and drug-pushing Billy Joe exults to his faithful, “They was all just a bunch of sinners...but I saved them, Lord! I showed them that using dope was the way to turn on to You!

Meanwhile, Billy Joe’s hooded henchman, the Atoner (“the AAAy-toner!” shrieks the mystical nutjob in a way that will become a secret code to everyone who sees this film), lurks and slaughters for his master, like a medieval Jason Voorhies transplanted to suburban SoCal, prefiguring those killers with superhuman powers who stalked 1980s slasher pix. 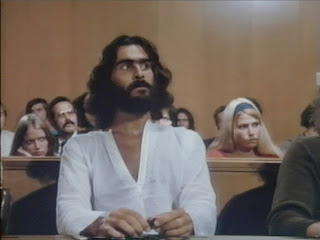 After testifying against these “Kill for Jesus” freaks because they crucified (!) her preacher husband, Fanny Pierce (former Hollywood starlet Jeanne Crain, fresh from 1967’s”youth in revolt”/drag-racing exploiter Hot Rods to Hell) finds herself in Straw Dogs territory as the incensed cultists seek holy revenge—by stalking her to a house where she’s babysitting, dig this, college students.

Enlivened by beyond over-the-top performances and some extraordinary documentary-style footage of the soup kitchens of Los Angeles’ Skid Row, this is the exploitation market in overdrive, plugging into then-topical/now-dated qualms: Fear the Hippies! The Mansons are everywhere! Beware of longhairs! Christians are murderous, brainwashed loonies! Hey, wait a minute…

Yet with all its sleazy and grim turns, 1971’s The Night God Screamed is a valid primer on the nature of guilt, earned or not—with a great twist ending (that you should just forget I ever mentioned).

Helped by a breakneck—hint, hint—pace, the script that feels like something John Waters wrote, but taken absolutely seriously.

With nary a sense of irony, the movie seems too bleak and malicious to be considered “Camp,” but its overwrought earnestness means it should be seen as the epitome as such: the unselfconscious overacting, the old-fashioned Hippie-Fear, the sociological pondering of the necessity of organized religion in an age of random mass-murder and widespread unemployment—this movie seems to has faith in its own nonsense, and it’s honestly infectious—while being too cheap and slapdash to be completely believed. 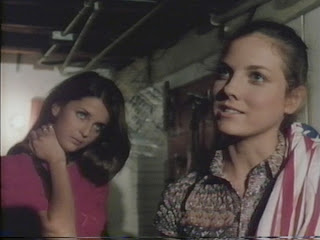 The Night God Screamed is not available for home viewing except as gray market options.
That said, I’m going to try and screen this at the Spectacle Theater in Brooklyn in July; I’ve started programming there and have got plenty of ideas and plans for a variety of films.
You will be updated!

In fact, my selections Mr. No Legs (1979) and Mercano el Marciano (2002) have been scheduled for June; I’ll post again and with further detail in a little while, when I know their exact dates. 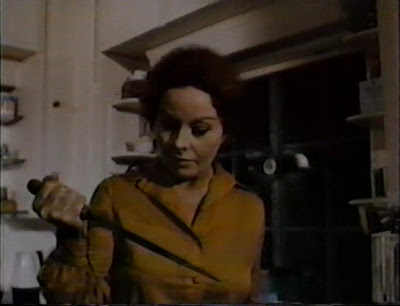