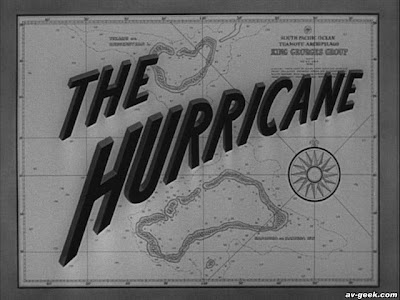 [This post is part of the Mary Astor Blogathon, being sponsored by the fabulous Silver Screenings site and our new best friend Tales of the Easily Distracted—both superb sites you should visit regularly. This tribute to Mary Astor runs from May 3rd to May 10th.] 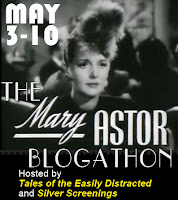 One of the first “disaster movies”—from even before the term existed—1937’s The Hurricane is a melodrama about two South Sea islander lovers separated by the cruel twists of their oppressors’ laws—until Mother Nature clobbers everyone in the penultimate reel.

A fan of the Disaster genre, I was looking forward to The Hurricane, but man! Like a white-trash family living in a trailer park in Florida, Texas or Louisiana, I should have known better.

Mary Astor is billed third in the film, but if you’re a fan of her work, you’d do better by watching The Maltese Falcon or The Palm Beach Story for the umpteenth time instead of this depressing mess. 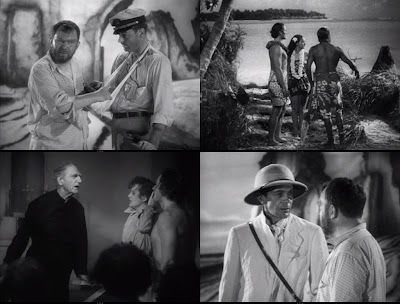 The Plot: Terangi (Jon Hall) and Marama (Dorothy Lamour—I dig that this legendary sex goddess’ stage name is “Love”) are young Polynesians devoted to each other on the far-off island of Manukura. 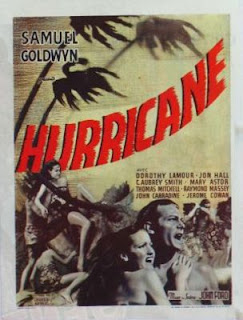 A week after their wedding, Terangi, a sailor, clobbers some politically connected jerk in a bar fight while on the mainland, and gets railroaded to jail for six months.

Back on Manukura, the Governor has a big stick up his ass about “obeying the law,” and refuses to aid Terangi’s case by having the sailor transferred to the island’s jail to serve out his time.

Terangi, being wild and free (and in LOVE), keeps trying to escape—and keeps getting caught—having additional years added to his sentence, much to the delight of John Carradine’s sadistic warden (a great slimy cameo).

Eventually, after eight years, Terangi does escape; getting back to Manukura a few days before a hurricane wipes out the island (I thought they were called “typhoons” in the South Pacific…), but not until he rescues Marama and their daughter (born when Terangi was in captivity). 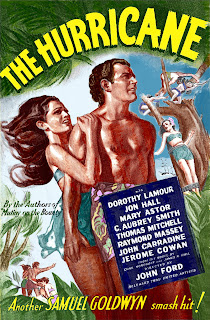 Directed by John Ford, but subjected to reshoots and rewrites by others throughout its production, The Hurricane is a distasteful, unhappy film, overburdened with suffering and injustice, even to the last frame: the fact that Raymond Massey survives—while countless “natives” are unduly punished by nature’s fury—is horrible.

Overall, the film’s overall treatment of the indigenous Polynesians as “happy,” dim-witted, giggling almost-“darkies” is offensive—and I’m a guy who loves 1964’s Zulu!—but the islanders are also all shown to be joyous, loving, almost mystical people—none deserving being washed out to sea in a cruel storm. But since they’re “dumb savages,” I guess they are expendable.

This is why, even though I’m a confirmed special effects nut, I cannot enjoy the film’s top-notch visual effects and miniature work at the conclusion: It is all too mean-spirited; usually the masses of victims slaughtered in a disaster movie are either unknown, faceless strangers or shown to be deserving of their awful fate. Throughout The Hurricane, we are repeatedly shown how nice, kind and decent the Polynesians are.

But the Governor manages to escape the tidal waves and cyclone-winds with nary a scratch—and it’s only because Terangi saved his wife (Mary Astor) that this tropical Javert doesn’t take up the chase again.

Ms. Astor has the thankless role of being Raymond Massey’s unlistened-to conscience as well as being Mrs. Exposition, but at least at the end she sways the nasty blowhard long enough for Terangi & Family to escape.

Massey plays Manukura’s French Colonial governor with the stiffest neck possible. His inexplicable obsession with maintaining the LAW to its most draconian ends borders on mania.

Although terribly paced (due to its many rewrites and reshoots?), it’s because of Massey’s character that this is the worst kind of melodrama, a South Seas rip-off of Les Misérables, where insufferable laws are adhered to for no other reason than to get in the way of our noble and one-dimensional young lovers.

Y’know, I had originally wanted to cover Hush… Hush, Sweet Charlotte (1964; Robert Aldrich), which was Mary Astor’s last performance in a feature film, but it wasn’t immediately available from the library. Damn, I should’ve waited…
Posted by Ivan at 8:01 AM