The Best Science Fiction Film You’ve Never Heard Of: 1968’s THE YEAR OF THE SEX OLYMPICS

Come for the salacious title and stay to get your mind blown! 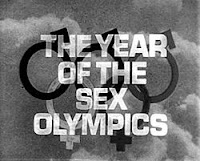 1968’s The Year of the Sex Olympics is the best science fiction film you’ve never heard of, predicting a world of human-debasing reality-TV shows and constant government-sanctioned/encouraged pornography. Written and created by sci-fi grandmaster Nigel Kneale, this film is intense and thought-provoking and still utterly relevant.
Do yourself a favor and catch this nightmare of the future as soon as you can! 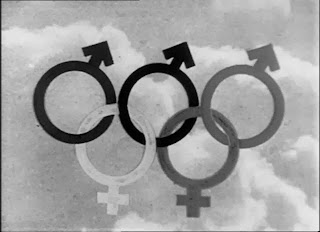 A 1968 television movie, The Year of the Sex Olympics is a socio-political satire originally created as a criticism of the hippie/youth movement, but instead became a prophecy of contemporary lowest common denominator reality-TV.

Author Nigel Kneale was a major figure in the UK sci-fi/horror genre genres, creating and writing all the well-regarded “Quatermass” films, and scripting many other shows and films, including Ray Harryhausen’s The First Men in the Moon; The Stone Tape, a TV movie that inspired actual psychic research; and Hammer Pictures’ The Abominable Snowman, as well as scripting the non-genre films Look Back in Anger and The Entertainer. John Carpenter is a huge fan of his work, and in fact, Kneale wrote the original script for the very underrated Halloween III: Season of the Witch, but had his name removed because he objected to the film’s excessive violence. Kneale’s was a unique, patient and personal voice in genre, routinely presenting big ideas and concepts via straightforward narrative and intelligent (or at least well-drawn) characters.

Like Brave New World or Fahrenheit 451, The Year of the Sex Olympics examines a “soft totalitarianism” future, in this case where keeping the population calmed to the point of nullification is the goal, and TV and drugs are the method—not 1984’s boot to the face. (Interestingly, Kneale also scripted a 1954 BBC TV-movie version of Orwell’s 1984 that by all accounts was very well received. Unfortunately, I haven’t screened it yet...)

The Year of the Sex Olympics’ future (“Sooner than you think,” the opening titles warn) is so far-gone that the controllers have created “the Sex Olympics,” where the world’s most beautiful people make love under the cameras—to distract the billions of viewers from doing any fornicating themselves and overpopulating the world further. (Sort of a flipside to Rollerball’s population pacification and control via televised ultraviolence. Make love, not war?)

“Sex is not to do, but to watch,” says one character. In the future this is “Apathy Control.”

When we glimpse the audience of the shows through the control room’s monitors, they look like blobby ghosts, or fat ghouls.

Since thinking has been discouraged (the chess machines play themselves, only to be watched), people in this world find it harder and harder to express themselves, even if they’re given the chance. It’s a high-tech world full of humans whose thought processes have been stunted—reflected in the almost incomprehensible torrent of slang-laden jargon and slogans spewed.

But trouble’s brewing: the ratings indicate that the viewers are getting bored with the copulation marathons, and something will have to be done.

A tedious pie-fight extravaganza—chosen because that’s what they watched “back then”—is a flop with viewers, but when the on-air suicide of a distressed designer sends ratings through the roof, the programmers realize they are on to something. “What are we supposed to do? Kill someone every night?!?” demands a conscientious future-TV exec who doesn’t realize he’s just created a formula for success.

As two members of the ruling class begin to question the way things are, sorrow can only follow, especially after they allow themselves to be ensnared in the Apathy Control’s next project… “In the old days I think they called that ‘despair,’ right?” says a programmer, planning something evil. “It’s a show—something’s gotta happen!”

Don’t let The Year of the Sex Olympics’ sub-Doctor Who budget deter you: As Steven Puchalski has written in Shock Cinema, “What begins like a simple satire of modern sexual openness turns into a powerful dystopian vision of modern voyeurism and inhumanity, with a surprisingly emotional pay-off. Its sci-fi trappings are often crude, with characters talking into plastic wristbands, eating from toothpaste-like tubes, sporting outlandish hairdos, and resembling an Ed Wood production of THE JETSONS. What it lacks in production values, it makes up for in admirably straight-faced performances and bold conceits, in what has to be one of Kneale's most unpredictably provocative works.”

The shocking thing about The Year of the Sex Olympics is how damn accurate it was in predicting not only the rise of ubiquitous pornography (what do you think Victoria’s Secret ads are anyway?), but the cruel and rotten “reality” shows like Fear Factor, Survivor or Big Brother, where suckers are debased routinely for the masses’ entertainment—and control: if everybody’s in front of their TV on Thursday night gawkin’ and laffin’ at the rubes, it’s one less thing for the security patrols to worry about. 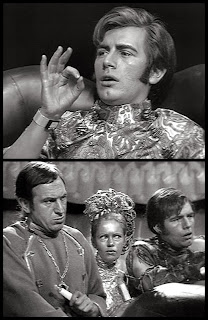 The film is also prescient in its depiction of a total surveillance state that is unquestioningly accepted—since the concepts of “family,” “home” and “love” have been eliminated, what’s “privacy”? And yes, “Art” has been eliminated, as well.

Starring Kubrick regular Leonard Rossiter as an executive who remembers what it was like in the past; and an unbelievably young Brian Cox as a sociopathically ambitious TV producer, The Year of the Sex Olympics was long considered lost due to the incompetence of the BBC, but can be found if you look—like at places like the Spectacle Theater in Brooklyn, where I managed to get Year shown during October; here’s the TRAILER.

Rumor has it that this film was originally broadcast in color, but the clods at the BBC goofed big-time and erased that version of The Year of the Sex Olympics.
It’s hard to imagine the utterly garish color-scheme that would have assaulted viewers’ eyes, but knowing the kind of art direction and costume design that turned up on 1970s musical-comedy-variety shows like Donny & Marie, or The Captain & Tennille, it’s sort of easy to guess—and a couple of stills (see at left; and below at bottom of this post, and at top, sort of) gives us an indication of how insane Sex Olympics might have looked.

That said, the film is “better” in B&W: more effective and moving, and the feeling of metaphor is increased due to our Pavlovian training via the original Twilight Zone. Additionally, being in B&W makes the cheap sets seem like a deliberate creative decision as opposed to designs dictated by budget: Sam Beckett instead of Sam Z. Arkoff. But damn, I would have loved to have seen this film in color (or “colour,” as they say in the U.K.) at least once…

This film is sold in the US by Sinister Cinema, but sometimes the film is available online, like HERE.

{I’ve written about The Year of the Sex Olympics before (like HERE), but felt this excellent movie needed further expanded promotion. It’s that good.}