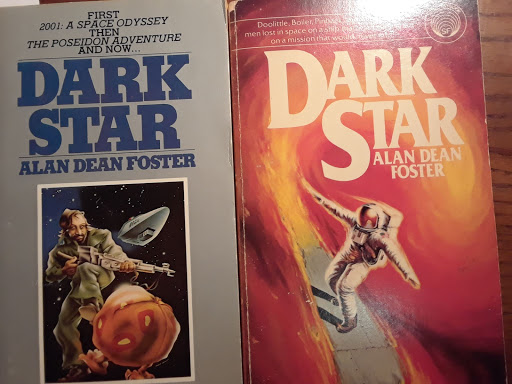 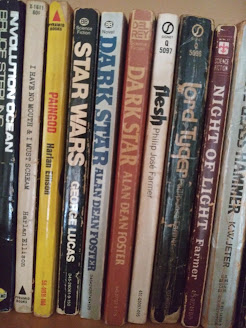 Just as I like to watch a film more than once—for whatever reasons—I also like to return to writing that has, in whatever way, grabbed me. (Then there’s the ton of books that I need to reread. Yipes.)

There is a handful of books I return to because they can make me laugh, or at least amuse me. Some of Westlake’s “Dortmunder” books, some Terry Southern, some Tom Wolfe, some Rudy Rucker.

Bob Gale’s novelization of the script for 1941 was a gut-buster—perhaps giving truth to the rumor that “if the script reads funny, it won’t play funny.” I wish I knew where my paperback of that was… It would be an interesting contrast to Ellroy’s depiction of Los Angeles of roughly the same time frame as that author’s Perfidia (2014) and This Storm (2019)—both highly recommended, by the way. But neither of Ellroy’s latest tomes are humorous—as a primary motivator: there’s certainly a mad glee in Ellroy’s fevered writings as some miscreant gets their elbow shattered… 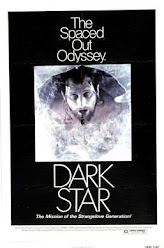 I don’t read too many books that are funny on purpose, but about every 10 years, I pick up Dark Star and have a good laugh.

In fact, nowadays I find I enjoy the book more than the movie…. (Although a recent screening via YouTube of the 82-minute version—my preferred version—turned out to be quite enjoyable.)

[BTW: The rest of this review/retrospective relies heavily on your being familiar with the characters and plot of the film Dark Star…]

I was nine or ten, saw the paperback on one of those old-school spinner racks in the pharmacy, and was entranced by the airbrush cover art by Robert Grossman (yep, the famous Time magazine and National Lampoon cartoonist; it seems that Ballantine Books’ budget for the book’s promotion was probably much larger than the actual film’s publicity budget). 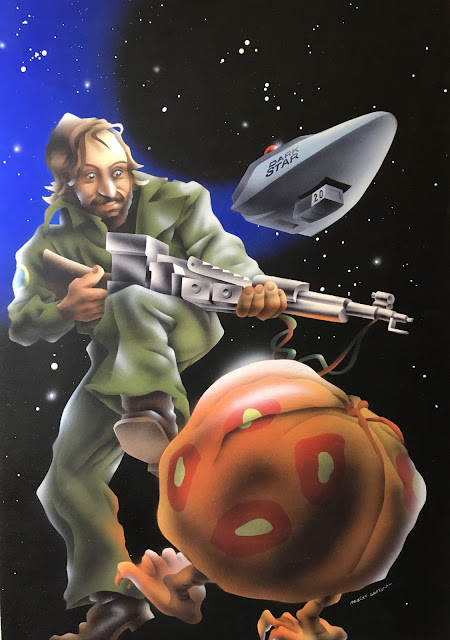 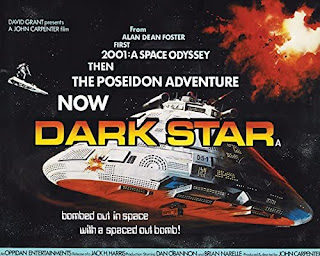 Meanwhile, the cover’s tagline of “First, 2001: A Space Odyssey, then The Poseidon Adventure, and now…DARK STAR,” certainly grabbed my attention—I’d more than likely had just seen those flicks, and the enjoyable memories of them influenced me to plunk down my $1.25 for the book. (Not that Dark Star the film or book have anything to do with The Poseidon Adventure, but you know how marketing departments are…)

Of course, the 16 (!) pages of B&W photos from the film that were included in the middle of the paperback were a great incentive to purchase, as well. (Remember when film tie-ins would include pix to entice prospective buyers? I sure fell for that trick a lot!)

“Guys sitting around in a spaceship talking about how bored they are. Hardest film novelization I've ever had to do. I had no choice but to explore their thoughts in detail... sometimes endless detail. 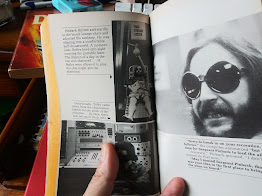 There was nowhere else to go. The cheap beachball alien posed a problem, xenobiology-wise, until I realized I couldn't describe it as anything other than what it was. So I just called it the beachball... and lo and behold, it worked.”

Dude, don’t sell yourself short—it works GREAT. Dark Star the novel is actually funnier and better sci-fi than the movie (go ahead, call me a heretic). 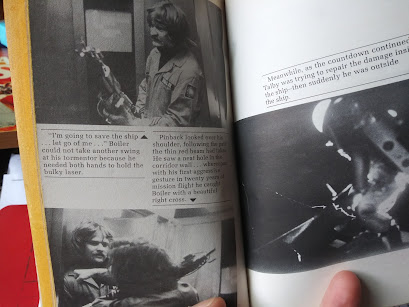 ADF has the uber-nerd’s desire to “fill in the gaps,” so even incidental stuff in the film is given an explanation and back-story by the author—and it’s never boring! A simple script adaption becomes a rich and detailed novel that has exquisite comic timing. Not that ADF wasn’t following Carpenter & O’Bannon’s blueprint, but he adds to it in incredibly complex ways. In the film, Boiler has a throwaway line about “getting a sandwich” during a meteor storm, but ADF takes this and creates an entire scenario where Boiler had smuggled a variety of high-quality deli meats onto the Dark Star.

Foster is smart enough to recognize he’s writing a book—the film opens with a transmission from McMurdo Base, with the nerd communications officer giving an update (and some info-dump). Foster, however, opens his book with Talby contemplating the universe: “…when the stars were your best friends, you didn’t have to work very hard to find out about them. You didn’t even have to ask. They told you and were happy to, confessed all their secrets without prodding, without coercion, without being violated by clumsy, poking, grabby machines.” (p2)

ADF creates lots more depth with the characters, so that Doolittle doesn’t come off as such a prick as he does in the flick—but on the other hand, Boiler becomes truly menacing, with a creepy interior monologue right out of Jim Thompson. Boiler is playing the knife game (that’s what it’s called—and Aliens gives tribute to this scene with Bishop) with a switchblade he’s snuck onboard the ship. He nicks himself, and sees no blood, but Boiler remembers the words of the NASA psychiatrists—he has “ice water in his veins.” In which case, the astronaut reasons, “there could be only ice water leaking out…. [A]nyone could see for himself that there was no blood dripping out.
Of course the distinct possibility existed that he was imagining his own lack of bleeding, that he was in actuality spurting gore all over the room, and that he had better seek treatment quickly or else bleed to death. In which case he was mad.
His smile grew broader, then vanished. But he wasn’t at all mad. Only Talby was mad, and he was harmless. Boiler wondered if Talby, mad Talby, would bleed.
One of these days, maybe he’d find out. (p51)

Talby, meanwhile, has been made more into a Zen master of the cosmos, making his being absorbed by the Phoenix Asteroids more logical (and the scene where they “accept” him is kind of beautiful and psychedelic: “Tiny motes of light like curious insects were dancing around the sleeve, and the bright suit material was glowing brighter, brighter, until it pained him to look at his own arm.” (p180)), and the scenes with the “dead” Commander Powell become absurdist comic genius, with a fantastic sense of timing. 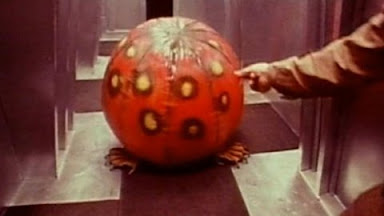 Interestingly enough, the main focus of the film, good ole Sgt. Pinback, becomes a bit of a cipher. His scenes are still hilarious, full of beautiful descriptions of the film’s physical comedy (unlike ADF’s other novelizations, like The Thing or The Black Hole—where the script given to him wound up much different from the final cinematic product—I think ADF saw Dark Star as a completed film before having to submit his manuscript), but ADF waffles around the whole “Bill Frug” thing, and we never get an in-depth examination of astro-nut Pinback’s inner life. (Which might be what ADF wanted: How much of a genuine and comprehensible inner life would a basket case like Pinback have?)

All that said, I always got the impression that ADF was resented for his financial success—because he would write novelizations (or ghostwrite them: the paperback of Star Wars that is credited to George Lucas was actually written by ADF), he was on the bestseller list a LOT. But ADF’s also written a mess of pretty darn good tales (I especially like his “first contact” novel Nor Crystal Tears, as well as the collection of short stories With Friends Like These…).

Getting back to Dark Star: While I am not as much of a Deadhead as I used to be, I am absolutely positive that the inspiration for the title of the film—as well as the name of the titular spaceship—comes from The Grateful Dead’s 1968 song ofthe same title. I refuse to believe that hippies like Carpenter and O’Bannon were not aware of the song—especially after its being used exceptionally well by Michelangelo Antonioni in his beloved (by me) Zabriskie Point (go to roughly 6 minutes to see the scene in question).

Wow, did I just write THIS MUCH about a cheap, disposable paperback novelization? 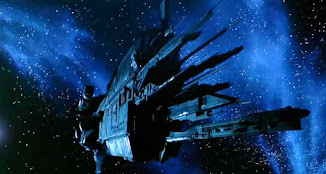 An Aside About a
SHARED UNIVERSE—

Shared universes—They have to make sense for me: no Star Wars Trek. No Doctor Doom versus Doctor Who. No Battlestar Green Lantern.

Yet, I’m one of those geeks who loves to make connections

In this case, it’s connecting Dark Star to other “lived-in universe” sci-fi movies— 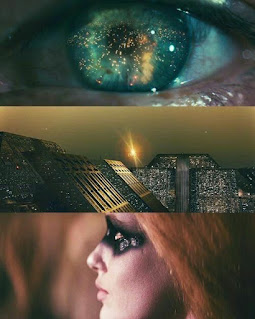 In fact, the connection would give the ship’s mission greater gravity—humanity knows about the horrible critters out there: Let’s find ‘em and nuke ‘em. It’s the only way to be sure.

Which doesn’t necessarily steal from the story’s early-1970s anti-government absurdist message. How the hell are you going to find said critters?

Peter Hyams’ Outland could certainly be in this universe, its Con-Am being a business rival of Tyrell or Weyland…

Douglass Trumbull’s Silent Running—the functionality of commercial space transportation—as well as Earth being turned into a cesspool necessitating the forests being put off-world.

So this shared universe would include: 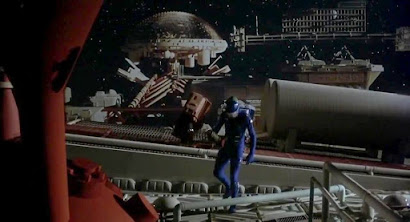 (and therefore—and all the rest, including the 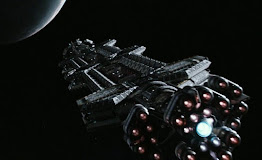 Now there’s a socio-futurological film series for ya! 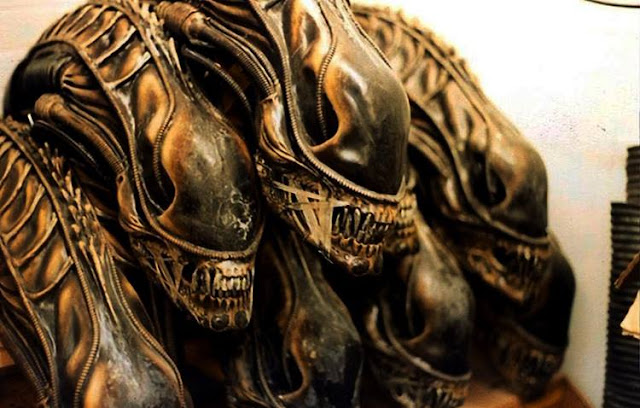