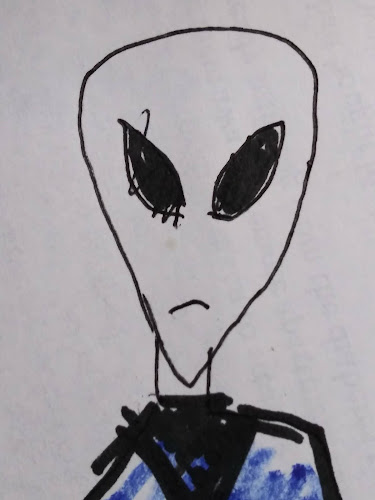 This Supernatural Mannequin theme has been in circulation for a while—so that the unfortunate slob who winds up with a Spooky Figurine should know better.

Haven’t they ever watched Tales From the Crypt or The Twilight Zone? Or even Goosebumps?
If it walks like a duck….

All the movies, comic books, and written works that cover the topic of a
Very Creepy Doll That Has Come Into Your Possession Suspiciously If Not Supernaturally
boil down to this:
--Person gets doll
--Person is creeped out
--Loved One says ditch the thing
--Person grabs onto consensus reality “logic” and over-rationalizes; sometimes driving away Loved One
--Person keeps doll despite vague apprehensions
--TROUBLE, lots of it

But now, let us start combining genres (and thinking about this, I really should turn this into a short story or film script… $$$$! Ka-ching!), so I can tell you about the time I found an alien doll. Not some Barbarella nor Gamora-esque space cutie neither, no sir…
At the time (it was the early-1990s), I lived in the deliciously sleazy East Village—back when it meant somethin’, maaaaaaaaaaaaan!
Yeah, I even had a black leather motorcycle jacket. I must have been cool.

Full of great nostalgia for that time of my life, I tend to romanticize it in the extreme, and mourn how the neighborhood has been changed. “The East Village has long attracted a youth population from outside the mainstream,” writes Jeremiah Moss in his excellent, and very recommended Vanishing New York: How a Great City Lost Its Soul (2017). “They were lefties, Beats, hippies, and punks, queer artists and scruffy castoffs,” Moss notes, continuing, “But in the 2000s, the young people who took over the neighborhood came straight out of the mainest [sic] part of the Middle American stream.” (p19-20) [While I recommend Vanishing New York, lemme tell ya: If you love what NYC used to be, you will be depressed when you read this book.]

Bringing up how the old neighborhood has changed isn’t just me being all wistful ‘n’ nostalgic—I sincerely believe that what happened to me wouldn’t happen today…. (but I could be wrong).

So, once wandering down the street—I am pretty sure I was with friends, I recall someone (though I’m not sure who) urging me to take it home—I found a Grey.

Yes, a Grey Alien: that otherworldly creature with a huge cranium, almond-shaped black eyes, an imperious expression, spindly almost fragile body, and metallic gray-colored skin. We have all seen them now in countless TV shows and movies. 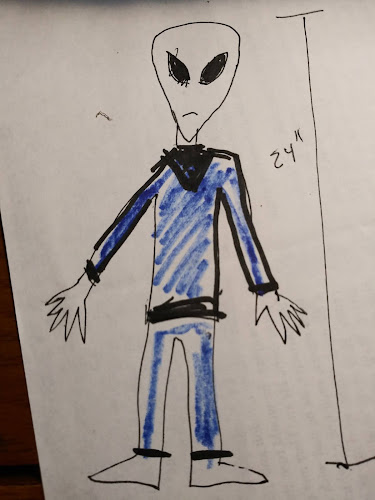 The doll was stuffed like a plushie, but not rotund and puffy in that attempt at harmless cuteness so many of those neo-blob plushies strive for. This thing wasn’t cute, but cute isn’t my thing. It was sinister, and I really dug that.

After an exhaustive search online, I couldn’t find a picture of it [but check out my poor illustration]—it was:

Roughly 24 inches or so in length—
Semi-metallic gray skin on its head, neck, hands, and feet—
Black trim on the wrists and pants cuffs, with a black belt—
The blue shirt was V-neck, and the doll was sewn to seem as if there was a black T-shirt under the blue shirt—
The eyes were black, but a shinier, more plastic type of fabric (Rayon or one of its polymeric cousins) than what was used for the cuffs and belt. This fabric slightly reflected the light back at you, and intrigued you…

My history as an English teacher must now intrude here:
Gray or Grey?

Which do I prefer?
Why the difference?

“GRAY” is the accepted way people in the U.S. spell the name of the color that’s a combination of black and white.

“GREY” is the British method of spelling.

“Greys” is how the aliens are usually referred—although they also can be referred to as “Grays.”

I’m using Wiki and the History Channel as my guides in my spelling of these space men. (Or remote-control space robots, or extra-dimensional beings, or… Well, it all depends on which theory you follow.)

Back to the doll that I found:
No tags, no markings, no corporate logo or copyright information, no indication that it had been made on an assembly line.

But the stitching and sewing? SO professional. Alarmingly professional. Just for whom had this doll been made if it wasn’t mass-produced? A bespoke doll? A one-of-a-kind made by grandma?

I had found it on top of a pile of trash in an old school metal trash can outside of a Lower East Side NYC tenement building. How come I noticed it before anyone else? Was it just timing, or had I been singled out?

At that point in history—George Bush the First was still the president—the plague of “Cute-thulhu” hadn’t taken over like it has now. This doll was a genuine oddity: a semi-cutesy evil Grey in a colorful jumpsuit. (Being a sort-of plushie made it less of a threat, as opposed to something made from hard plastic?)

I took it home, and the damned thing quickly infiltrated my community: an extraterrestrial effigy was a magnificent conversation piece, the center of attention at any social gathering—and back in the day, I had plenty of parties!

But all that partying did have its price, and I paid it financially, mentally, spiritually, and with my health.

It’s all behind me now, thankfully, but that damned doll was sitting there the whole time, those pitiless semi-reflective black eyes watching me spiral, spiral, spiral out of control, down, down, dowwwwwwwwwnnn…

This may seem tangential, but please be patient:

I had read some Whitley Strieber (author of Communion (1987) and other related alien contact-related books), and knew that owls were often how contactees/abductees would remember the Greys. This is more well-known now, with books and films sometimes using it as a major plot point.

I hadn’t seen any owls, but let’s proceed on a thought experiment: Contactees/abductees see owls because they are familiar if odd (or because we know owls are odd, but acceptably odd).

But what about something hiding in plain sight? That doll… Maybe it just wants me to only think it’s a doll…. Could it be throwing out a “thought screen” a la 1988’s They Live? Is it really a doll—or is there some damn alien sitting there?

And what if it’s doing more than observing? What if it was controlling?

DEAR GOD, HAD I BEEN LIVING WITH A BRAIN-CONTROLLING ALIEN IN MY HOUSE FOR SEVERAL YEARS????

I hope not, I really do. I don’t think I’ve shown any of the usual signs of “contactees,” but if a brain-laundry system had been used on me, how would I know? This hadn’t been the “usual” contactee scenario, not according to my research.

Before the end of that phase of my life, just before I “hit bottom,” I had the doll in one hand, and the switchblade I’d bought in Tijuana in the other. The blade was out, and I was struggling with myself as to sticking it into one of the critter’s big black almond eyes.

I never did it. I rationalized to myself that destroying the demon would ruin any resale value.

But if it’s possible that this was some “hide in plain sight” sleeper agent alien with brain-clouding capabilities, then it’s possible it would scramble my desire to cut it open.

Madness was only slightly around the corners of my life at the time—remember all that partying I was doing? Financial woes due to addictive behavior had caused me to, you know, spiral out of control. I began selling everything—and stealing some stuff to sell, as well (but that’s another story, and anyway, statute of limitations).

That said, one of the first to go in my “Everything-For-Sale Sale” was that doll. Whew!

In a flash, the gray goblin was someone else’s problem. Is that how it fell into my life? Was there someone watching me pick that thing up off the trash can, clapping their hands that it was no longer their problem?

Did my life improve? Not for a while.

Whether that time-consuming process of life restoration and recovery was due to the healing process from close proximity to neutrino displacement fields from an ultraterrestrial android with mind-bending technology has yet to be determined.

But my life did get better, and while I’ve had LOTS of problems and troubles since, I haven’t had anything remotely as weird and mysterious as this. (Even when I saw a UFO several years ago, the event was terrifically mundane—I was driving on a major highway through Vermont in a driving rainstorm, and to my left in that valley over there was hovering a tubular V-shaped flying vehicle, about 100 feet long….  Just hovering, like a dull, dumb balloon. Kinda boring, actually, and I couldn’t really look at it because of the gnarly highway conditions. If you told me it was some secret US Air Force project, I’d probably believe you….)

Eventually, until something completely unrelated recently jogged my memory, I had even forgotten about the space critter doll. Mortgages and graduate school will do that to you.

In conclusion, while I don’t have the Grey anymore, I still have Winnie the Pooh (see below)—I’ve had Pooh since I was in my crib, where I gnawed off Pooh’s left arm while I was teething. 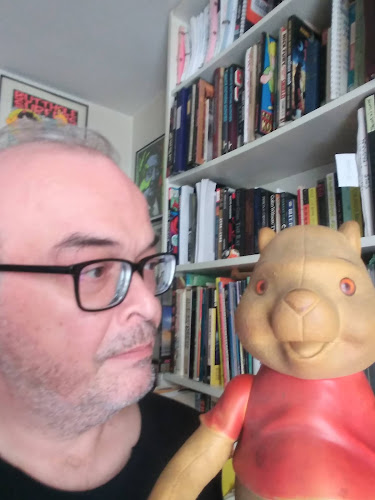