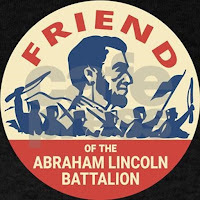 For those who don’t know, the Abraham Lincoln Brigade (also known as the Abraham Lincoln Battalion) was a bunch of supremely idealistic young people who volunteered to assist the Spanish Republicans against Generalissimo Francisco Franco (who’s still dead… if anyone remembers that tired-even-then gag from Chevy Chase-era Saturday Night Live…). It wasn’t a fair fight in any way shape or form (Germany used the Spanish battlefront as a testing ground for equipment and troops—like what happened at Guernica), and the Spanish fascists won. At first…

But that has nothing to do with my kitchen…where a perfect storm was a’brewin’.
I had had some dried lentil beans in the cupboard, and I’d been itching to do something with some cabbage:
I had some kim chee left over and wanted to extend it. I conducted some R&D and found that cabbage and lentils go well together—and guess what? There’s been a kielbasa sitting in the fridge that’s been screaming to be used for something! Bingo, as they say.

One basic head of cabbage was purchased at the local Foodtown; one quarter of which went to extending my kim chee—lemme tell ya, kim chee with firm tofu, warm rice, and avocado go together like gangbusters!

To prep cabbage to add to kim chee, just soak the cabbage in heavily salted water for at least an hour.

Meanwhile, the other quarter of the cabbage went to extending some coleslaw I’d also bought at Foodtown. I love coleslaw, but it’s a bitch and a half to make.
But on the other hand, the store-made kind is routinely very sweet and wet, sopping wet. An ocean of mayo-vinegar-etc. residue. [The quality of coleslaw you get at diners or in take-out meals is so hit or miss, it’s almost impossible to quantify. I’ve got a lead-lined belly: I can eat practically anything, and will each whatever unfortunate slaw has been brought with my burger—but I will warn you not to try it if its particularly gnarly….] 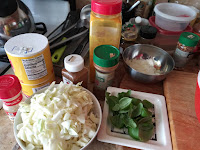 But when you buy that tub of Foodtown-contractor-created slaw, if you mix it with about a quarter head of shredded cabbage (which I soaked in sugar water for at least an hour before) and about one-quarter to one-third a cup of shredded/shaved/peeled carrots—get ’em thin, and longish. Mix it all together thoroughly. Now you’ve got some hearty coleslaw, not some wet mess.
[Regarding cabbage in either coleslaw or kim chee. when I say “soak for at least an hour…,” I mean that you could soak it overnight, but at least an hour for the minimum of sugar/salt penetration of the plant structure.]

But the other half of a cabbage, I saved for my lentil soup.

Stuff Used/ingredients for Lentil-Cabbage-Kielbasa:
Lentils (rinse ’em and soak ’em—but you only have to soak ’em for like an hour; the point of cooking them is to have them break apart in the soup—you’re not eating lentil pellets!) [one pound bag]
Cabbage (shredded) [half a cabbage]
Kielbasa (see photos)
Peppers (like tiny bell peppers) (chopped fine) [about one cup]
Onions (chopped fine) [two or three]
Carrot (chopped to desired consistency) [see photo]
Scallions (chopped fine) [about a handful to half a cup]
Ginger [2-3 tablespoons, probably more]
Siracha [depends on taste]
Ketchup (about three packets from the deli; other recipes call for tomatoes or tomato paste in this soup, but that’s too much for me—a little taste of tomato is okay)
Fresh Basil from my “garden”
Various spices to taste 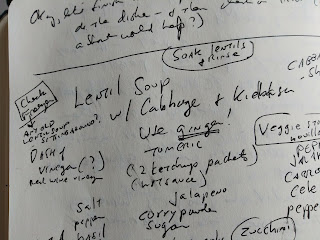 There’s my notebook; lots of notes and ideas—I usually R&D by looking up recipes on-line, and I go through and check my file of old notes, recipes, newspaper recipes and food articles I’ve cut out or printed up.
What works? What tastes good? Do we learn from mistakes?

Biggest rule of cooking: taste it! I like the flavor that comes from a combination of spices, along with the melted animal fats, any flavors from the meat. Some veggies add flavor, or contrast—the semi-sweetness of carrots can add a nice touch, and while chopped and diced peppers tend to have their flavors leached out by the soup or stew, the pieces maintain an alternate texture which the mouth detects, and even a bit of chewiness. I love to use onions, but I prefer to sauté them beforehand, and then let them be almost dissolved during the cooking process.

Cabbage isn’t something I cook with often, but since I knew it would be around, I included it in the Lentil Soup.

I think it works well with lentils, the two complementing each other: Lentils have a really earthy vibe in my opinion, and need serious help in soup or stew prep—lentils need complementary flavors, like a pile or vegetables or a chunk of pork, and spices, too! [No wonder the Abraham Lincoln Brigade was going nuts from their diet! Once in college, I was subjected to the infamous “Lentil Goo” that one of my housemates had created. It and the pan it had been created in were left on the tracks to be obliterated by the southbound Southern Pacific freight train one happy evening. There was much dancing by the side of the tracks, lemme tell ya….] 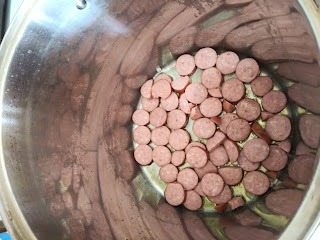 I used kielbasa as a flavor enhancer, but not as a strict component of my soup. Of late, I have received some, oh, I don’t want to say complaints. No, nothing that serious…. But “strong suggestions” that my use of meats, especially sausage type meats, be toned down. 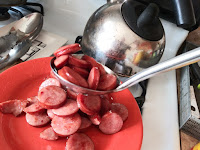 Okay, I get it. But a soup like this NEEDS meat flavoring. And that kielbasa wasn’t going anywhere. At first, I thought of chopping it up and using it in the soup, then later going through the tedious process of using tongs to pluck out all the meat pieces. But we nixed that when we remembered out big-ass BRAND NAME stainless steel multi-pot! It had a perforated steel steamer basket that could be hung over the soup for cooking pasta or steaming veggies and so on. 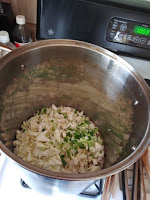 That perforated basket could be used for the kielbasa. One of the recipes I researched on-line mentioned starting the soup by sautéing and browning the kielbasa in the pot. In that case it was a Dutch over, and I normally might have used that cooking utensil, but I was planning to make more than my Dutch over would comfortably hold. Who needs spills?

Sauteed the chopped kielbasa, then set it aside, and later when the soup was going, I’d hang the basket over the hot soup, to let the cooked kielbasa steam, then drip delicious flavor into the churning mass. 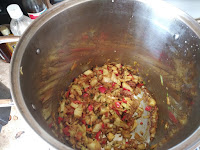 Don’t clean out the grease from the cooked kielbasa, use it to cook your chopped onions and cabbage!

At this point, it’s probably better to follow along with the photographs, but if you have any questions or comments—or if you need a clarification or two, let me know, and I’ll reply ASAP! 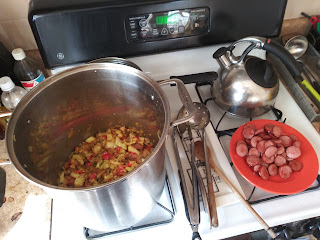 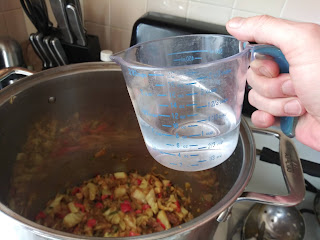 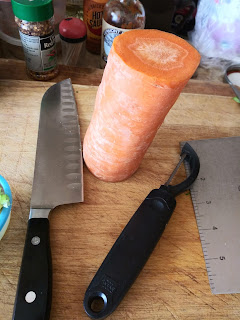 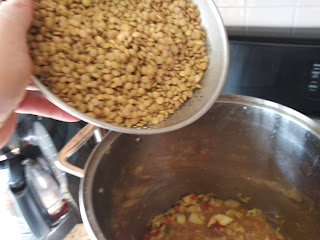 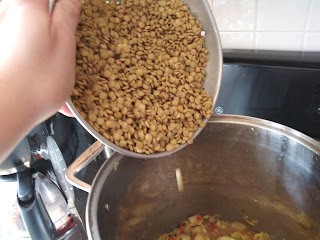 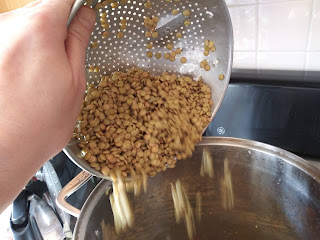 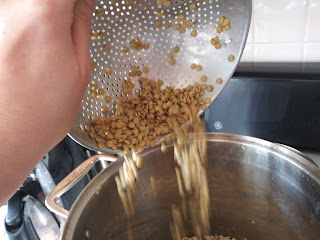 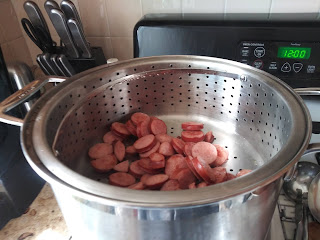 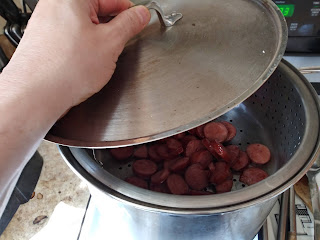 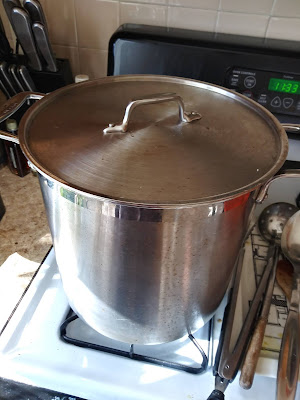 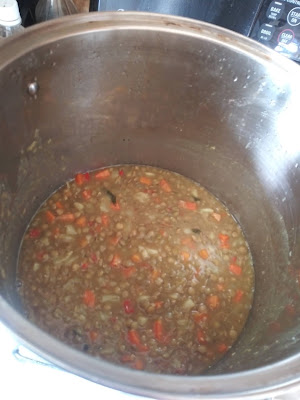 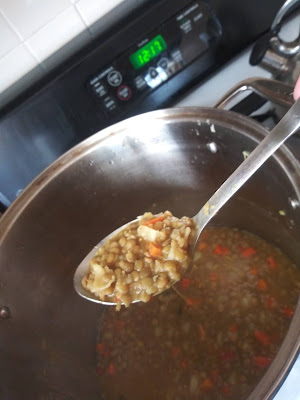 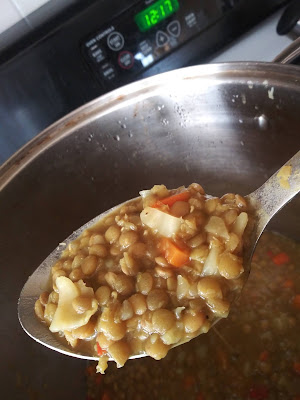 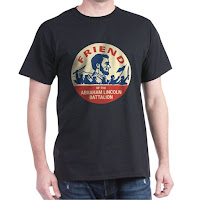 BTW, all that stuff about the Abraham Lincoln Brigade, I learned at the knee of my stepfather’s stepfather (whose bitch-cunt-whore of a wife cut me out of the will—goodbye, tens of thousands!). The old geezer had been a young idealistic commie, and followed Hemingway to Spain. The mean bastard ditched that socialism jazz toot sweet when he was released (except for lip service), though, and upon returning stateside promptly opened a liquor store (that accepted signed-over welfare checks) in one of the worst slums of Brooklyn. No great fortunes without great crimes, I suppose, and mediocre fortunes are begat from mediocre crimes…. But, damn, I coulda used some of that dough…Sigh.
Posted by Ivan at 3:41 PM