Talkin’ ’Bout T’s (Filler? Or, Showing Off?) [Designing My Own T-Shirts to Stay Sane] 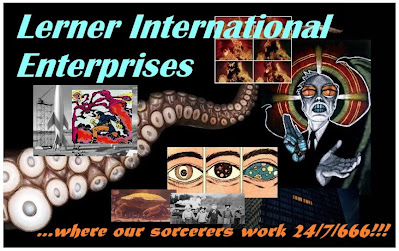 THE FEAR has planted its big old self into my life, and there’s only one thing that will get rid of it:
MONEY! Got any extra lying around? Where’s Guy Grand when you need him? Why wasn’t the utter and total pursuit of filthy lucre not my raison d'être when I was younger? 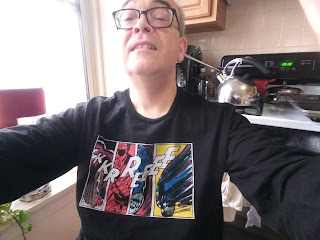 I’m doing what I can to combat THE FEAR (got a job for me? I can keep secrets!), but it is quite the drain on the intellect and the spirit.

But brief joys can be found at our own fingertips… Like these keeee-RAY-zee designs and collages surrounding this excessive verbiage? I made ’em! Taught myself Paint 3D and some of the Gimp system (yeah, I know, rah-rah: big deal), and as I mentioned the last time I posted, I’ve been turning them into T-shirts!

When I was a kid, with the exception of school athletic shirts, I only wore white T-shirts until I was about 15. That was when I went to my first rock concert (The Ramones at Walt Whitman Auditorium at Brooklyn College on a blizzardy early-January day in 1981!).

Then, for the longest time, that black Ramones shirt was alone amongst the whites. But when I hit college, got a Visa card (BOY, was THAT trouble for me!), and attacked those goofball head shops and novelty stores that sold “weird” and “hip” T-shirts. I’m almost glad my luggage got stolen in Seattle on the way home, as I zig-zagged around the West (Los Angeles to Salt Lake City to Seattle… It wasn’t supposed to end there, but getting all your luggage stolen will do that to you…). Sometimes it’s embarrassing looking back at old photos from around my collegiate times. Those shirts are so lame.

Long story short, over the decades I’ve amassed, then purged quite a collection of T-shirts—having friends in bands, or who worked for bands, helped: lots of those rock T-shirts got tossed my way. Remarkably, now I only have a handful.

Some people need to buy lots of shoes (I refuse to be sexist and say, “women need to buy shoes”—there are PLENTY of clotheshorse men out there—you ever see a boy with a huge collection of sneakers? Same thing.)

For me, it’s
Books (preferably used mass-market paperbacks) and T-shirts as my retail therapy. Weirdly enough, thrift stores essentially never had T-shirts I desired, but way back when—like, approximately three decades ago—if I found an interesting shirt in the gutter—oh, Lord, I shouldn’t be confessing this, but on the other hand, who’s reading this? Leave a comment, even if just to say, “Hello.”

Returning to my shame…. If I found a shirt on the street, and if it was the right size, had an interesting design or was slightly amusing, and literally wasn’t covered in shit—what I would do is: Get a plastic bag (usually there was one swirling around on the sidewalk), stuff the shirt in the bag, and leave it in the bag until taking it to the laundromat and washing the fucker in hot water and bleach BY ITSELF. Then, after it’d been disinfected by the heat-bleach treatment, I wouldn’t even wear it right away; I’d throw it into the laundry basket and cycle it in with the rest of the dirty wash, cleaning and drying that particular shirt one more time before wearing it.

Street shirts, dude! I’ve found a few—but only remember the Captain America shield on a black shirt I found on some trash-strewn Bushwick side street… Which then I purged out of the collection, when I was forced to move out of Brooklyn (and my part of Bushwick, Brooklyn, was renamed East Williamsburg). I guess I walk around looking at the ground a lot…. I’m always finding something.

One Sunday morning about a zillion years ago, while giving an out-of-town friend a tour of the city, when we were walking through Chelsea, and right on top of this garbage can outside one of those tony brownstones—I’m sure it was West 16th between 8th and 9th Avenues—was a fab black Eddie Bauer sweater—that I still have! (And it still fits!) My out-of-town-but-visiting friend, Karyn B., was disgusted (I think her exact quote was, “Ewwwwwwwwwww!”, but I could be wrong), but I gave that sweater the bleach-heat treatment, it survived, and the proof is in the pudding: I still have that sweater, Jeeeez! Twenty years later? Probably more. (I like to think that the sweater was stripped off by some lusty fellow as he’s leaving one of the gay bars in the area. Give up a sweater for a night of passion? Sheeeeeeeeeeeeeeeeeeit! I’ve done worse.) [BTW, go HERE for my weird tale of “finding” an alien. Or a doll. Or an alien doll. Or…. Yeah, I find weird stuff. I wonder if there’s any particular job out there that this particular skill set is of use to….]

But I wore that Captain America shield shirt quite a bit when I had it. And it was my first mainstream superhero shirt—I had had “joke” shirts, but nothing emblematic.

While I’ve always been a nut about comic books ("Make Mine Marvel" was my cry as a dedicated FOOM kid), when I started my T-shirt binge my freshman year at Pomona College, I avoided comic book T-shirts like the plague. I was hip! See my cool HIP T-shirt? Comic books are for nerds, and that’s not me; I’m hip!

Thankfully, the need to be OUTRAGEOUS settled down, and the desire to be weird for weirdness’ sake (why not?) mutated into a more subtle form—real weird things, or things that look real.

Along the way, I have made handmade T-shirts, usually my drawing on a shirt with Sharpee markets, or friends have made homemade silkscreens or vinyl cut shirts for me, either from my design or designs inspired by me—but there has NEVER been a tie-dye shirt in my collection. Never. Even when I would go to Grateful Dead shows... Then I wore paisley...

Over time, my relationship with my T-shirts has become personal. It has to be personal with me now: what does this shirt mean to me and my life?

[Something I noticed: Some of my “meh” shirts becoming all-time faves once I’ve cut their sleeves off. With sleeves, they were boring, suburban, pathetic-in-a-trying-too-hard way; now, they’re industrial bad ass! Having tattoos with a sleeveless cut-off T-shirt helps: Punk Rock!

Slightly influenced by the great Naomi Klein’s “No Logo,” I also didn’t want to just buy someone else’s stuff to promote, no matter how much I may believe in it (Go, Mets!). 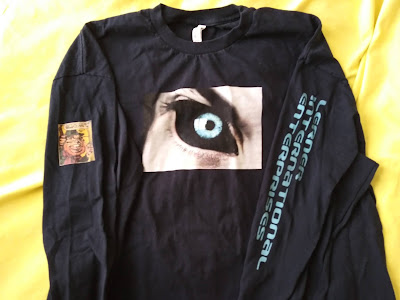 My long-suffering wife showed me the way when she introduced me to the fab kids at Maximum Graphics, over on Amsterdam Avenue. Interestingly, at the same time I learned of these guys, I had been teaching myself Paint 3D to expand my Felix-the-Cat-like bag of tricks, and more importantly, not go insane from being trapped inside due to COVID.

In the business world—where if there was any justice, Lerner International Enterprises would be S&P Number One! —we call this SYNERGY.
Say it along with me: Sinner-Gee.
It may sound like a dish at your favorite Indian food restaurant, but it’s a business strategy!
Yes, it’s a bold new concept reinvigorating the American marketplace…. (BULL—cough, cough—shit.)

That editorial sarcasm out of the way… 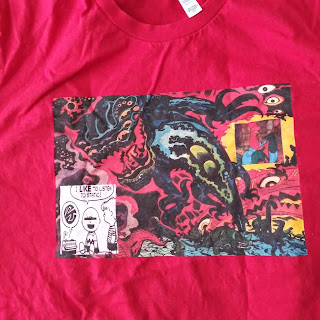 The discovery of MaxGraf at the same time as the revitalization of my hobbyist career as a collagist (I used to make some GREAT collages out with scissors and glue!) was quite opportune, and I took advantage of the shop’s website’s easy graphics interface.

I’ve been making myself some shirts!

For the elaborateness that Maximum Graphics delivers, their prices are terrifically reasonable, and I’ve used shirts as gifts already, with more on the way. 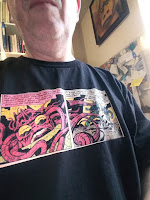 Well, I can only hope my hard work can rid myself of THE FEAR. (Got a job? I’m getting thisclose to driving nitro over the Andes in an attempt at a paycheck…) But maybe I’ll be a little more confident knowing that my chest is covered in a customized, one-of-a-kind Lerner International Enterprises T-shirts: “Our Sorcerers Work 24/7/666!”

P.S. Yeah-yeah-yeah on the copyright violation stuff. I’m not making these shirts for money; I’m making them for my mental health. Nor am I disrupting/disfiguring/warping any of my swiped images in an overtly nasty way. And I need a job! Want me to stop making these crazy shirts? Gimme a job! 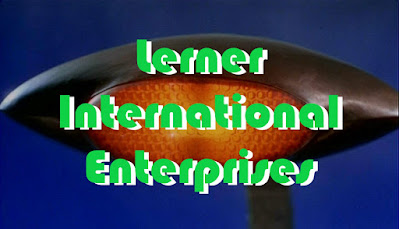 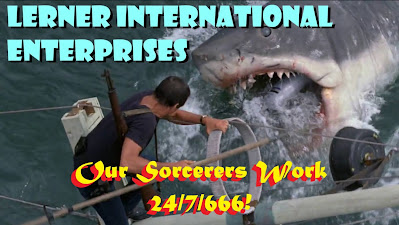 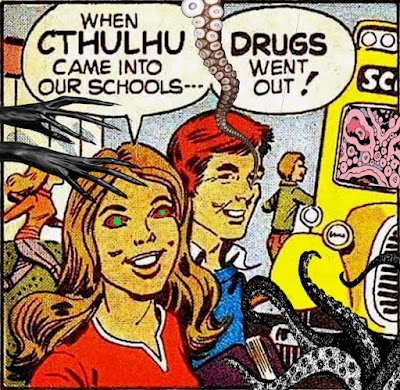 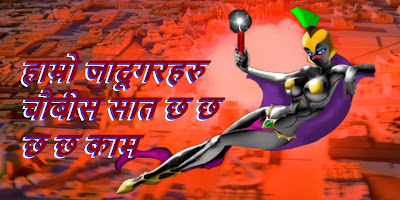 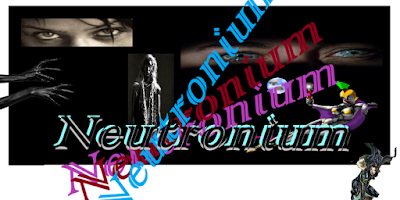 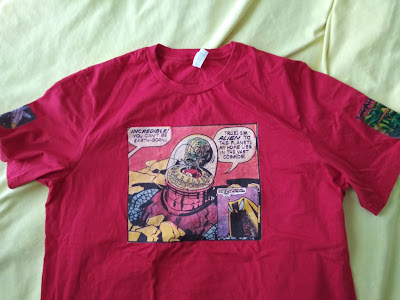 Email ThisBlogThis!Share to TwitterShare to FacebookShare to Pinterest
Labels: advertisements for myself, Hyperspace!, my spare time, T-shirts